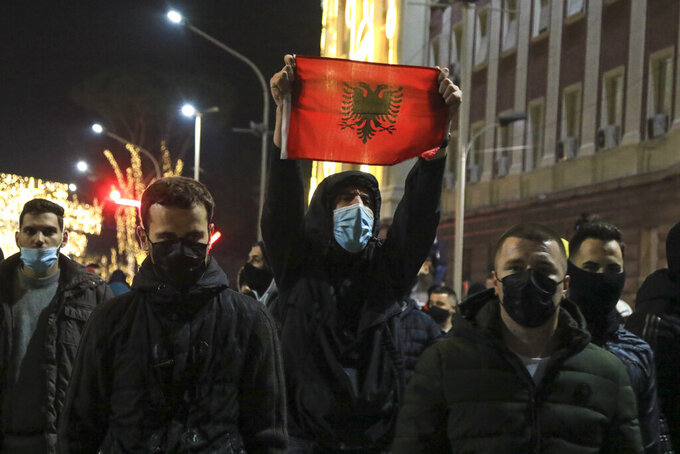 TIRANA, Albania (AP) — Albanian demonstrators on Sunday kept up their daily protests over the fatal shooting of a man by police enforcing a coronavirus curfew.

The rally started peacefully from the capital Tirana’s Skanderbeg Square to the main government building of Prime Minister Edi Rama, with protesters chanting “No justice, no calmness!” and “Justice for Klodian!”

Demonstrators asked for the resignation of the police chief and the release of those who have been arrested in days of clashes with police. Later some hurled stones at the Tirana police station, where police responded with tear gas and water cannons. Smaller protests were held in other cities.

Albanians have defied a coronavirus ban on public gatherings and have clashed with police in recent days after Klodian Rasha was killed in Tirana amid a curfew early Tuesday. Police say he ignored officers’ calls to stop and ran away. A police officer has been arrested and is being investigated for “homicide in excess of necessary self-defense.”

Rama has apologized for what he called the “inexplicable and completely unreasonable” shooting of Rasha and his interior minister resigned Thursday.

Scores of people have been arrested in five days of protests and almost 300 have been charged with holding an illegal protest during the pandemic, as well as with arson and public order breaches. Authorities say 26 police officers and at least four protesters have been injured in the clashes.

Rama has accused opposition politicians, including President Ilir Meta, of inciting the violent protests. The center-right opposition Democratic Party blames Rama for Rasha’s death and is pledging that it will topple the prime minister in April's parliamentary election.

The U.S. and the European Union have urged Albania's political parties to exercise restraint amid the protests.