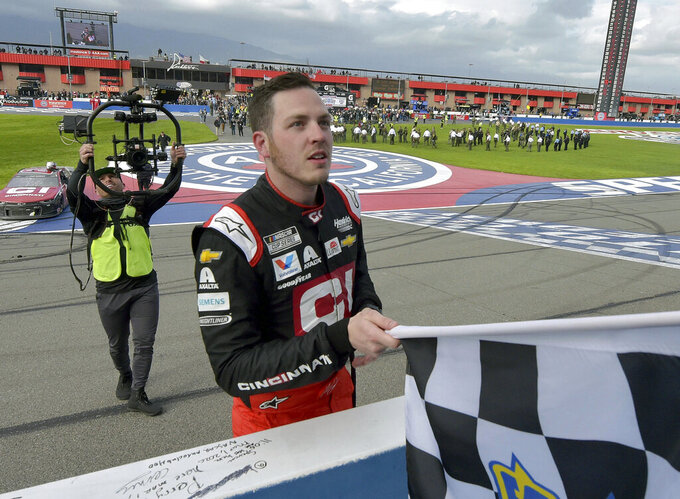 FILE - In this March 1, 2020 file photo, Alex Bowman accepts the checkered flag from an official after winning a NASCAR Cup Series auto race in Fontana, Calif. Bowman has signed a one-year contract extension to remain with Hendrick Motorsports through 2021. The announcement came Saturday, May 16, a day before NASCAR resumes its season at Darlington Raceway in South Carolina. (AP Photo/Will Lester, File)

The announcement Saturday came the day before NASCAR resumes its season at Darlington Raceway in South Carolina. Bowman goes into the event already qualified for the playoffs as winner at California on March 1, two weeks before the season was suspended by the coronavirus pandemic.

“Pumped to lock down the contract extension for 2021!” Bowman posted on Twitter with a highlight video of his time at Hendrick. “Thanks for all the support, can’t wait to get to Darlington."

Bowman is fourth in the Cup standings and in his third full season driving the No. 88 for Hendrick. He filled in for Dale Earnhardt Jr. in 2017 when Earnhardt was sidelined with a concussion, then took over the ride the next year when Earnhardt retired.

Bowman, a 27-year-old from Arizona, has two career Cup wins and was a career-best 12th in last year's standings.

Securing Bowman for next year now leaves Rick Hendrick with one seat to fill — the No. 48 Chevrolet after seven-time champion Jimmie Johnson retires at the end of the season.

Bowman was one of the stars of NASCAR's seven-race iRacing Series during the shutdown. He provided in-race social media updates that included photos of his dog in the seat of his simulator and humorous commentary. He also scored an iRacing victory at virtual Talladega.