Alex Morgan back with US for SheBelieves Cup 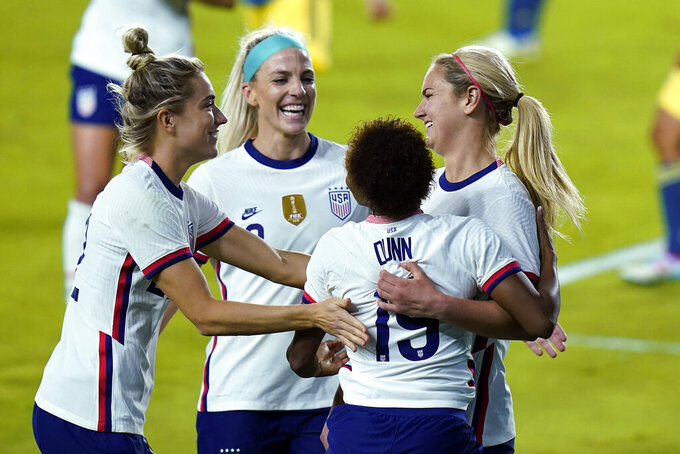 Alex Morgan is back with the U.S. national team for the SheBelieves Cup after a bout with COVID-19 over the holidays.

Morgan missed the team's January camp and a pair of exhibition games against Colombia because of the coronavirus. She is among 23 players coach Vlatko Andonovski called into camp ahead of the tournament later this month.

Morgan is coming off a stint with Tottenham, where she went last fall to get playing time after the birth of her daughter, Charlie.

“I think that definitely helped her,” Andonovski said. “Unfortunately, the COVID now took her a step back, but I have no doubt that she’ll be able to get over all of the obstacles along the way.”

Also returning to the team is Christen Press, who missed the January matches and has been playing overseas with Manchester United.

The SheBelieves Cup, a round robin-style tournament with Canada, Brazil and Argentina, is set to begin Feb. 18 in Orlando, Florida. The winner will be determined on points.

Left off the roster were goalkeeper Ashlyn Harris and defender Ali Krieger, who were both included in the January camp and Colombia matches.

Tobin Heath, who plays for Manchester United, also was not included because of an ankle injury that will sideline her for 10 to12 weeks. Andi Sullivan was left off because she is dealing with a quad strain.

Sam Mewis, the reigning U.S. Soccer Player of the Year, injured her ankle in the second match against Colombia but she's progressing faster than expected, Andonovski said.

"It’s still a question mark about how much we’re going to be able to rely on her. But I am pretty confident that we’re going to see her in at least one of the games," he said.

Andonovski also invited three players to train with the team: Mallory Pugh is regaining fitness after injury. Emily Fox was the top pick in the recent National Women's Soccer League draft by expansion Louisville, and Jaelin Howell is a junior at Florida State.