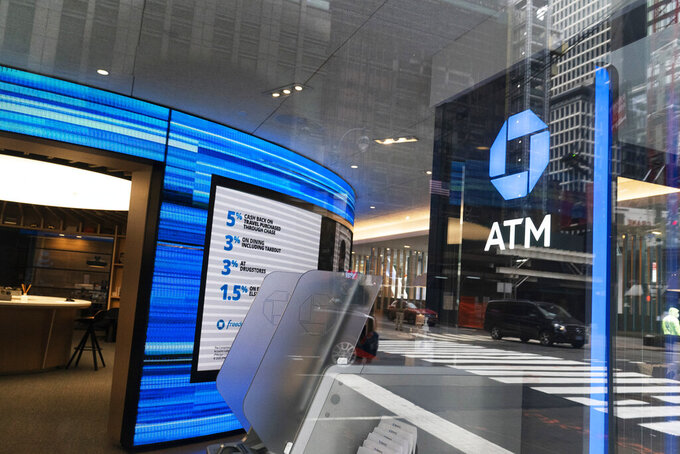 FILE - This Jan. 13, 2021, file photo shows a Chase ATM in New York. All 23 of the nation's biggest banks are healthy enough to withstand a sudden economic catastrophe, the Federal Reserve said Thursday, June 24, as it released the results from its latest "stress tests," giving the banks the green light to start paying out dividends to investors and buying back stock. (AP Photo/Mark Lennihan, File)

NEW YORK (AP) — All 23 of the nation's biggest banks are healthy enough to withstand a sudden economic catastrophe, the Federal Reserve said Thursday as it released the results from its latest “stress tests," giving the banks the green light to resume paying out dividends to investors and buying back stock.

The Fed also said it would remove all of the coronavirus pandemic restrictions they put on the industry last year, following the results of the tests.

The Dodd-Frank Act passed after the 2008 financial crisis requires the nation's biggest, most complicated banks to undergo a set of tests to see how well their balance sheets would hold up against a severe economic meltdown like that seen in the Great Recession. The tests vary from year to year, but generally involve the Fed testing to see how much in losses the banking industry would take if unemployment were to skyrocket and economic activity were to severely contract.

Due to the economic damage caused by the pandemic, the Fed did two stress tests of the banking system last year, trying to simulate the impact a long-lasting economic downturn and pandemic would have on the nation's banking system. The Fed’s worst case scenario last year, a double-dip recession, would have caused roughly a quarter of all the biggest banks to breach their minimum capital requirements.

As a safety measure during the pandemic, the Fed put in place restrictions on the banks to pay out dividends and buy back shares.

This year's harshest test, known as the “severely adverse scenario,” involved a hypothetical global recession lasting from late 2020 to September 2022, causing the U.S. economy to contract 4%. Unemployment would jump to 10.75%, and stock prices would fall 55%.

Under these parameters, the nation's 23 largest banks would collectively lose more than $470 billion. While the average tier-one capital ratio of these banks would fall to 10.6% from an average level of 13%, that would still be more than double what is required under the Dodd-Frank Act.

“Over the past year, the Federal Reserve has run three stress tests with several different hypothetical recessions and all have confirmed that the banking system is strongly positioned to support the ongoing recovery,” said Vice Chair for Supervision Randal K. Quarles.

Freed from the Fed's restrictions, banks like JPMorgan Chase, Citigroup, Goldman Sachs and others are expected to announce plans to pay back investors in the coming days. Bank stocks have risen sharply this year as the U.S. economy has recovered from the pandemic and investors have increasingly bet on these large institutions hiking up their dividends or buying back more shares.