All soccer suspended in Argentina because of virus cases 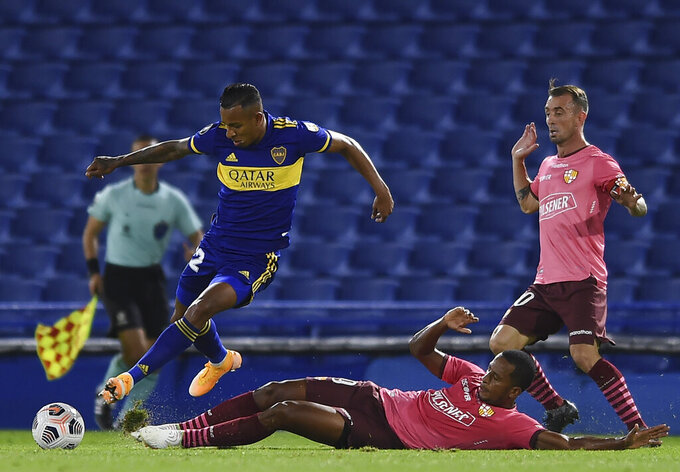 Sebastian Villa of Argentina's Boca Juniors, left, goes with the ball past Nixon Molina of Ecuador's Barcelona during a Copa Libertadores soccer match at the Bombonera stadium in Buenos Aires, Argentina, Thursday, May 20, 2021. (Marcelo Endelli/Pool via AP)

BUENOS AIRES (AP) — All soccer in Argentina was suspended for nine days Friday ahead of a strict shutdown decree for much of the country amid the coronavirus pandemic.

The move comes about three weeks before the June 13 start of Copa America, the continental soccer championship scheduled to be played in Argentina.

The suspension is yet another blow for Copa America organizer CONMEBOL. The South American soccer body decided Thursday to drop Colombia as co-host amid a wave of protests against the country's president, Iván Duque.

Argentine President Alberto Fernández said this week that Argentina could host the entire Copa America if needed, but CONMEBOL has not yet said where the matches initially scheduled for Colombia will be played.

The decision by the Argentine soccer association, known as AFA, to suspend the game in the country does not apply to Copa Libertadores matches scheduled for next week.

“At this moment in which our country must make an effort to control this distressing pandemic that affects us, AFA and all in soccer will once more follow national authorities and suspend the schedule for all matches of local tournaments for nine days,” the soccer body said in a statement.

Argentina has been averaging about 35,000 daily COVID-19 cases and the number of deaths by the virus has risen quickly, totaling nearly 73,000.

Fernández issued his shutdown decree for high-risk regions on Thursday. It will begin on Saturday and last until May 31.