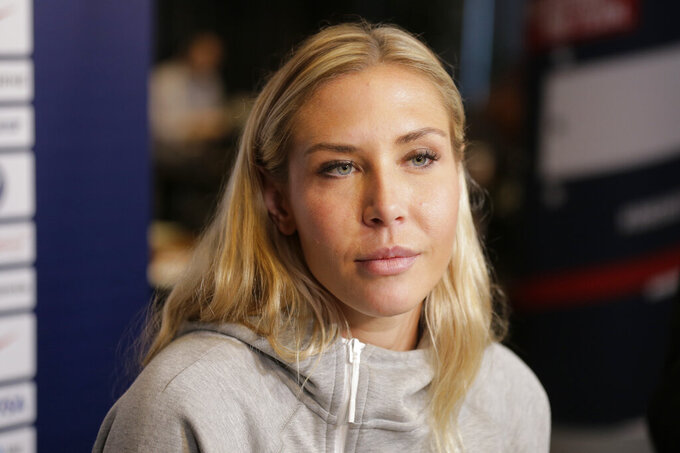 FILE - In this Friday, May 24, 2019 file photo, Allie Long, a member of the United States women's national soccer team, speaks to reporters during a media day in New York. Allie Long is likely the only National Women’s Soccer League Player that launched a new career while sheltering at home. Long has been playing video games on Twitch and has built a solid reputation in the gaming world – so much so that she’s been able to raise some serious money for charities, while also educating fellow gamers about women’s soccer.(AP Photo/Seth Wenig, File)

Allie Long is likely the only National Women’s Soccer League player who launched a new career while sheltering at home.

Long has been playing video games on Twitch and has built a solid reputation in the gaming world – so much so that she’s been able to raise some serious money for charities, while also educating fellow gamers about women’s soccer.

But soccer still comes first for the midfielder who was on the U.S. team that won the World Cup last summer in France. She's put her controller down — for the most part — as she prepares with OL Reign to play in the NWSL's Challenge Cup starting this weekend in Utah.

The NWSL is the first professional team sports league in the United States to return amid the coronavirus pandemic. Long and her teammates practiced together in Montana before heading to Utah, where they'll be sequestered for the monthlong tournament.

Long has been with the NWSL since it was founded in 2013, playing first for the Portland Thorns and now for the Reign for the past two seasons.

Following the World Cup victory, Long and several other national team players, including Julie Ertz, Becky Sauerbrunn and Crystal Dunn, took part in a gaming event with other athletes and a number of prominent streamers.

“I was like, 'Wow. Like, I can’t believe how many people are into streaming.' It’s still hard to understand the concept,” Long said. "And so someone there said, 'How do you feel about a 16-year-old winning $4 million for playing Fortnite and you guys just won the World Cup and are splitting four million or something like that?' I was like, I need to start playing."

The NWSL had not yet started its season when the league was shuttered March 12 because of COVID-19. Long announced on Instagram that she was joining the video gaming platform Twitch and that she liked to play Call of Duty.

Before she knew it, she was a Twitch celebrity, playing with NBA stars Meyers Leonard and Josh Hart in a tournament for charity. She teamed up with Real Sociedad forward Alexander Isak on a La Liga Twitch tournament, raising money for Feeding America. She has since added Facebook Gaming for her weekly Warzone Wednesday events.

Long jokes that her celebrity status on Twitch was probably by default because she's one of the few high-profile female athletes who are streaming. She doesn't just play Call of Duty. Predictably, she's currently undefeated on EA Sports' FIFA soccer game.

Watching her play, Long isn't afraid to trash talk. While the national team fights for equal pay in court, Long is preaching equality and extolling women's soccer to the gaming community.

“I do think that some people get on there and they’re, 'Oh wow, I didn’t know girls could play,'" she said. "I always get that, whether I’m literally playing soccer with guys or gaming, so I’m used to it. But I kind of love it because then I feel, 'Yeah, I’m going to show you.'”

Long is wary of the coronavirus — her brother and his girlfriend in New York contracted the virus — so gaming was a great way to pass the time while sheltering at home. She was in Tacoma, Washington, training with the Reign when the pandemic struck and the state implemented one of the most extensive stay-at-home orders.

“Actually, I feel like it’s fit perfectly into quarantine, and this whole time period that we’re going through. Just being able to raise money, doing something that means I’m not soccer, soccer, soccer all the time, and having fun with it,” Long said. "And I really love the fact that it’s kind of a way to bridge the gap for women’s soccer and women in general, in the gaming world.”

The Reign have had an eventful offseason. First, coach Vlatko Andonovski resigned to become head coach of the national team, replacing Jill Ellis. Then the team was purchased by OL Groupe, the parent company of French powerhouse Olympique Lyonnais, in December. Farid Benstiti was brought aboard as coach.

Now known as OL Reign, the team opens the Challenge Cup on Tuesday night against Sky Blue. The Reign won't have Megan Rapinoe, who opted out of the tournament, but they still have considerable talent including Long, Jessica Fishlock, Shirley Cruz and reigning NWSL rookie of the year Bethany Balcer.

Gaming will wait while Long gets back to her day job.

“Since I’ve actually streamed, it kind of takes a lot out of me and I’ve only streamed on my off days because soccer comes first and that’s my main priority,” she said. “And so right now in training camp I do just Warzone Wednesday, and we’ll have to see what happens once the tournament starts.”