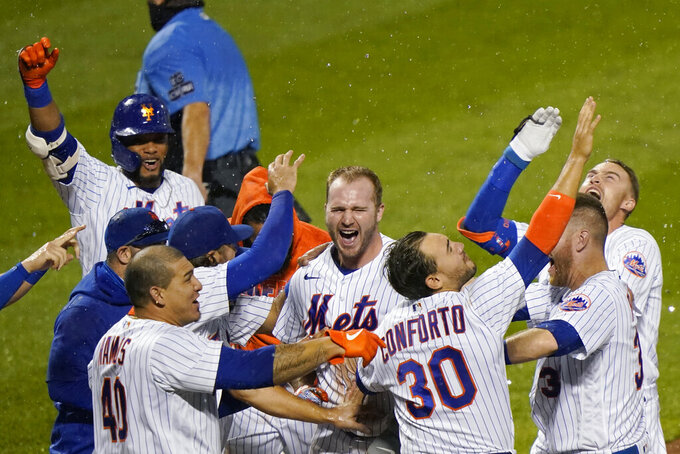 NEW YORK (AP) — Pete Alonso hit a two-run homer leading off the 10th inning Thursday night, lifting the New York Mets to a come-from-behind, 9-7 win over the Yankees in the final Subway Series game of the season between the teams.

The Mets came back from deficits of 4-0 and 7-4 at Citi Field to earn a split of the six-game season series, all of which was played over the last six days.

J.D. Davis forced extra innings by homering off Yankees closer Aroldis Chapman one pitch after pinch-runner Billy Hamilton was thrown out trying to steal third base.

Davis has been battling a sore left hip since he was hit by Chapman's fastball last Saturday.

“Of course, absolutely any time a pitcher drills you or anything like that, it’s good to get a little bit of revenge,” Davis said.

With a heavy rain falling, Alonso hit the second pitch he saw from Albert Abreu (0-1) well into the left-field seats.

Alonso raised his arms and looked towards the dugout as the Mets spilled out to celebrate a win on the afternoon they honored franchise icon Tom Seaver, whose death was announced Wednesday.

“We’re always expecting something special from his at-bats,” Mets manager Luis Rojas said. “It was an emotional day for us, a special day honoring and paying tribute to the greatest Met of all-time.”

It was the first walk-off homer for Alonso, who set a major league rookie record by hitting 53 homers last season. The hit was his first in five at-bats Thursday and only his seventh in his last 47 at-bats.

“I’m just so happy that I capitalized and brought this one home,” Alonso said. “I think that this is a really special win not just for us, but for anybody who knows about the Mets or knows about Tom Seaver. This is a really meaningful and special day. Really, really happy that we could get it done in the way that we did.”

Edwin Diaz (2-1) tossed two innings and faced only two batters in the 10th. Tyler Wade, who started the inning on second base as the automatic runner, was doubled up on DJ LeMahieu’s flyout to right.

“I just tried to be aggressive on a ball where I thought (it) was hit a little bit softer and I’ve got to do a better job of not turning my back to that ball right there,” Wade said. “That can’t happen. I tried to be too aggressive right there.”

It was the third extra-inning game between the teams in the last four days. The Yankees swept Sunday’s doubleheader with a pair of eight-inning victories.

The loss was the third in four games for the Yankees, who dropped a three-game series to the Tampa Bay Rays prior to heading across town.

The Yankees squandered a 4-0 second-inning lead before going ahead in the seventh, when Gio Urshela hit a tiebreaking single and Brett Gardner added a run-scoring double.

Aaron Hicks had an RBI single in the eighth for a 7-4 lead before the Mets mounted their second comeback. Amed Rosario delivered a two-run, two-out single in the bottom of the inning.

“Tough one to lose, because we did a lot of good things today coming off a tough loss,” manager Aaron Boone said. “We were set up there to close it out and it just didn’t happen today.”

The Yankees chased Robert Gsellman during a four-run second in which Wade had an RBI single and LeMahieu lofted a sacrifice fly before Luke Voit’s two-run double.

Todd Frazier homered leading off the second for the Mets, who tied the score against J.A. Happ in the third when Jake Marisnick hit an RBI double and Rosario and Jeff McNeil delivered run-scoring singles.

The Mets paid tribute throughout the game to Seaver, who died Monday at the age of 75 due to complications from Lewy body dementia and the coronavirus. The scoreboard sported 1969 graphics and highlights of his career were aired on the DiamondVision. Footage of mask-wearing fans dropping cards and flowers at the entrance to Citi Field — located at 41 Seaver Way — also aired and Mets players were pictured against a backdrop of Seaver’s 41.

Gsellman and Happ opposed each other for the second straight start — the first immediate rematch between a Mets starter and a Yankees starter since interleague play began in 1997.

Yankees: SS Gleyber Torres (left hamstring, left quad) got live at-bats at the team’s alternate training site in Pennsylvania and is expected to rejoin the team for this weekend’s series in Baltimore. … OF/DH Giancarlo Stanton (left hamstring) has increased the pace of his running drills but isn’t close to a return.

Mets: Davis (left hip) started his second straight game at DH. He missed Monday’s game and was limited to pinch-hitting duties Tuesday as he battled the aftereffects of being plunked by Chapman.

Yankees: Rookie RHP Deivi Garcia (0-0, 0.00 ERA), who dazzled over six innings in his big league debut against the Mets on Sunday, is expected to start one game of a doubleheader at the Orioles. The Yankees have not announced their second starter.

Mets: RHP Rick Porcello (1-4, 6.00 ERA), the only member of the Mets’ opening day rotation to take every turn this season, is scheduled to open a four-game set against the Phillies.