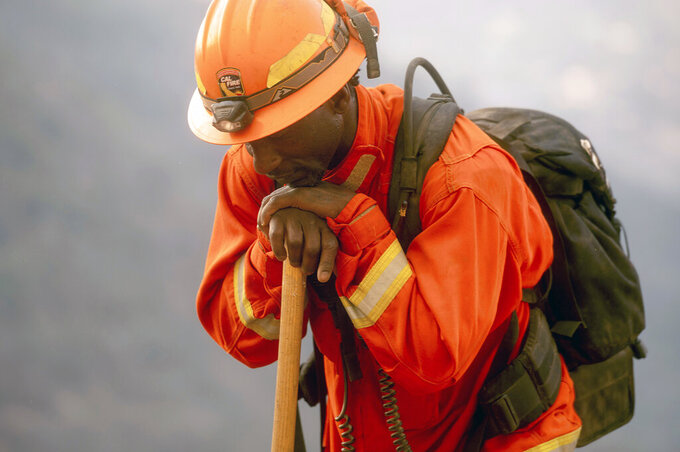 FILE - In this Aug. 17, 2020, file photo, an inmate firefighter rests during a break from battling the River Fire in Salinas, Calif. California could change its constitutional ban on slavery to remove the words "unless for the punishment of crime," further reducing the state's already faltering dependence on thousands of inmate firefighters, under a proposed amendment backed Thursday, Feb. 25, 2021, by local officials and actor-activist Danny Glover. (AP Photo/Noah Berger, File)

SACRAMENTO, Calif. (AP) — California relies on thousands of inmates to fight massive wildfires, churn out vehicle license plates, mop prison floors and myriad other tasks — all for wages that rarely top a few dollars a day.

Opponents want to end what they call a visage of slavery. They propose to amend the state Constitution's ban on indentured servitude to remove an exemption for people who are being punished for crimes.

Prison labor predominantly affects Black and Latino people who make up the majority of inmates, San Francisco Supervisor Matt Haney said Thursday. He is asking the Board of Supervisors to become the first to formally back the overhaul proposed by Democratic Assemblywoman Sydney Kamlager of Los Angeles.

“Even through the COVID-19 pandemic, California inmates have been forced to work for as low as 8 cents per hour," he said. "Many have been on the front lines fighting our increasingly dangerous wildfires, earning just $2 to $6 a day.”

California has long depended on inmate firefighters to help battle increasingly monstrous wildfires. But their numbers have dwindled in recent years as the state has eased sentencing laws and shifted more offenders to county custody instead of state prisons.

Along with daily wages of $2.90 to $5.12, depending on skill level, inmate firefighters get an additional $1 an hour when assigned to emergencies, corrections officials said.

The state also depends on inmates to work as cooks, custodians, gardeners and many other roles that keep the prison system running from day to day.

Inmates also work for the Prison Industry Authority, which has produced most of the prison system's protective equipment during the pandemic along with more traditional products such as vehicle license plates, furniture, road signs, clothing and numerous food products.

Ending such programs “would be devastating to California, especially on the fire crews,” said Nina Salarno, president of Crime Victims United of California. “This law would hurt rehabilitation efforts ... because you are then taking away incentives for inmates to learn skills and trades so they can come back into society and be self-sufficient.”

State officials did not comment on the proposal to end the practice, but the authority promotes the programs as training inmates to be “job ready" upon release. Those inmates “are getting jobs and paying taxes. For every inmate that does not return, taxpayers save money!” it says on its website.

Inmates who apply to work for the authority receive credits toward earlier release, along with the potential for industry certifications in fields such as comoputer coding, welding or metal working. Nearly 4,700 inmates are currently in the program, which has space for more than 6,700 inmates.

They are generally paid 40 cents to $1 an hour, though the limited number who work for private companies while serving their sentences receive industry-comparable wages.

Legal Services for Prisoners with Children executive director Dorsey Nunn, who co-founded the reform group All of Us or None, was sentenced to life in prison when he was 19 then paroled in 1981.

He disputed the benefits of the prison work while arguing that an amendment would do more to promote racial equity and healing than recent efforts to rename schools and tear down statues of controversial figures.

“People actually thought that my rehabilitation was occurring because they were forcing me to work. Actually, involuntary servitude gives work a bad name,” Nunn said. “You can’t volunteer when you’re being forced to do this stuff. Nobody in their right mind in the state of California would take a job if they was paying you 15 cents an hour or seven cents an hour or $2 a day.”

He and other proponents hope a change in the California Constitution would eventually lead to a similar ban in the U.S. Constitution. The state's current wording dates from 1974 and reads, “Slavery is prohibited. Involuntary servitude is prohibited except to punish crime.”

The proposed amendment would change the wording to, “Slavery and involuntary servitude are prohibited.”

George Galvis, co-founder of All of Us or None and executive director of Communities United for Restorative Youth Justice, said there still could be room under the change for prison work and rehabilitation programs leading to jobs.

“The key word is ‘involuntary,’" Galvis said. “It doesn't necessarily mean that there won't be employment or vocational programs and opportunities," but he said inmates should be paid competitively.

The good job-training programs now benefit relatively few of California's 95,000 inmates, argued Nunn, while "half the people that work in the prison are sweeping, picking up paper and doing other stuff. It’s no great skill being taught and they’re being paid pennies on the day.”

Putting the amendment before voters would take a two-thirds vote in both chambers of the Legislature, where Democrats hold such an edge. Proponents noted that similar changes have already been adopted in the more conservative states of Colorado, Nebraska and Utah.

Riverside County Supervisor Manny Perez intends to bring up a resolution supporting the California effort when his board meets March 9. He called inmate labor part of “the lingering legacy of slavery.”