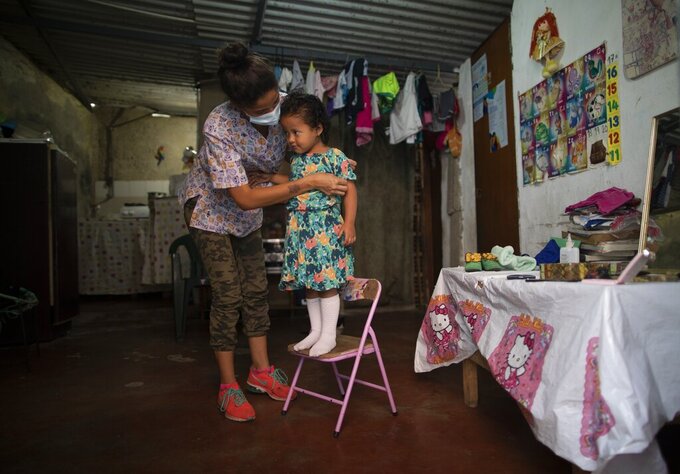 Elena Escalante helps her 3-year-old daughter Zaii prepare for a homespun beauty pageant in the Antimano neighborhood of Caracas, Venezuela, Friday, Feb. 5, 2021. Neighbors in the hillside barrio gathered for the carnival pageant tradition to select their child queen for the upcoming festivities. (AP Photo/Ariana Cubillos)

CARACAS, Venezuela (AP) — At least one corner of Venezuela's capital felt a splash of Carnival excitement Friday despite a global pandemic that has struck a country already mired in a years-long crisis.

Neighbors in a hillside barrio called Antimano stepped into the street to cheer, shout, blow whistles and bang pots and pans while picking their child queen for the upcoming Carnival festivities.

Rosario Gutierrez, 11, won the honor among roughly a dozen contestants. She wore a bright-red dress and blew kisses to everybody in sight as she strutted before a 3-judge panel.

“I totally wasn't expecting this,” she said, buzzing with excitement. “I'm so happy to see the joy on my friends' faces."

While it was a simple, homespun pageant, it falls within Venezuela's tradition of producing world renowned beauty queens.

A bit of festivity in Venezuela is especially needed now to lift spirits and bring a little hope amid tough times, organizers said.

Venezuela's President Nicolás Maduro has even approved of such activities. He recently announced relaxed quarantine measures in the days surrounding Carnival, so children can enjoy themselves.

Carnival festivities in Venezuela traditionally focus on activities for children, who dress up and parade their neighborhood streets. It's much more subdued than the wild parades and parties in neighboring Brazil.

With her title, Gutiérrez, along with her first and second runners-up, will lead a parade of children in costumes on Feb. 15 through their neighborhood.

The pageant played out in a courtyard between humble homes. More than a dozen girls between the ages of 3 and 12 spent the early morning hours Friday dressing and doing their hair and makeup.

Some wore fancy dresses, while others dressed in their regular shorts and T-shirts.

At showtime, they turned on dance music played through a portable speaker. Hearing their names announced, each girl rounded a corner into the courtyard, walking a make-believe catwalk.

Their mothers and other observers erupted in cheers, dancing and waving their arms wildly. At least for a short time everybody felt transported to better times.

Elena Escalante, a 24-year-old mother of one contestant, welcomed the much-needed distraction. So did her 3-year-old daughter, Zaii, who talked about it for days.

Escalante, a school teacher, is among the majority of Venezuela's workers who earn a minimum wage that equals less than $2 a month. Neighbors like her rely on a local soup kitchen run by a charity called Feed the Solidarity to support her young family.

“She’s locked up in the house and doesn’t go to out much, so this an exciting day,” Escalante said, referring to her daughter.