Amid production woes, US coal deaths at historic low in 2020 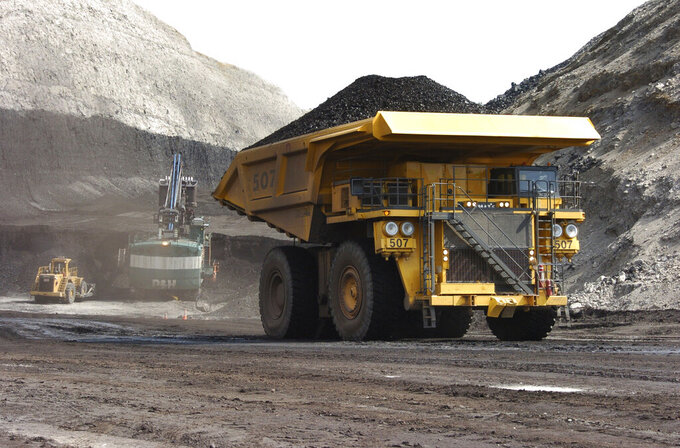 FILE - In this April 4, 2013 file photo, a truck carrying 250 tons of coal hauls the fuel to the surface of the Spring Creek mine near Decker, Mont. A judge threw out a lawsuit on Friday, May 22, 2020, from a coalition of states, environmental groups and American Indians which sought to revive an Obama-era moratorium against U.S. government coal sales on public lands in the West. U.S. District Judge Brian Morris said President Donald Trump's administration had fixed its initial failure to consider the environmental impacts of ending the moratorium. (AP Photo/Matthew Brown,File)

LOUISVILLE, Ky. (AP) — Five miners died in U.S. coal mines in 2020, an all-time low mark for an industry in a year that saw continuing declines in production as electric providers move away from burning coal.

The federal Mine Safety and Health Administration, which tracks the deaths, said Wednesday there were 29 total deaths in all the nation’s mines, a sixth-straight year that total mine fatalities were kept below 30.

The previous low in yearly coal deaths was eight in 2016, and there were 12 last year. Workplace deaths in coal mines have remained low since 2014, the first year annual deaths were less than 20. Since then, the totals have exceeded 12 only twice. A century ago in 1920, the nation had more than 2,200 coal deaths, before machines replaced manpower underground.

Kentucky and West Virginia each had two coal mining deaths in 2020, and there was one in Pennsylvania. The death of a coal miner on the job in Pennsylvania in February was attributed to natural causes and did not count as a mining-related accident.

Coal production has declined steadily over the last decade, as dozens of coal-fired power plants have shuttered. There are no new coal power plants being built in the U.S.

For the quarter from April to June in 2020, U.S. coal mines produced about 115 million tons, compared to nearly 180 million tons over the same time in 2019, a drop of 36%. The nation's power plants consumed 30% less coal in the first half of 2020, according to the federal Energy Information Administration.

The EIA said about 70 percent of new electric generating capacity going online in 2021 will come from solar and wind sources.

David Zatezalo, the U.S. federal mine safety chief, said officials focused on reducing mining accidents related to the use of vehicles and conveyor belts across all mines, which include coal, metal and non-metal mining operations.

“We also focused on chronic problem areas, such as disproportionate accidents among contractors and inexperienced miners," Zatezalo said in a release. He said those deaths were reduced by 13% in 2020 compared to the year before.

MSHA said 2020 was also the first year in its history that it recorded no seatbelt-related deaths at mining sites. Zatezalo said MSHA inspectors issued 195 citations in 2020 for sanitary conditions related to the COVID-19 pandemic.