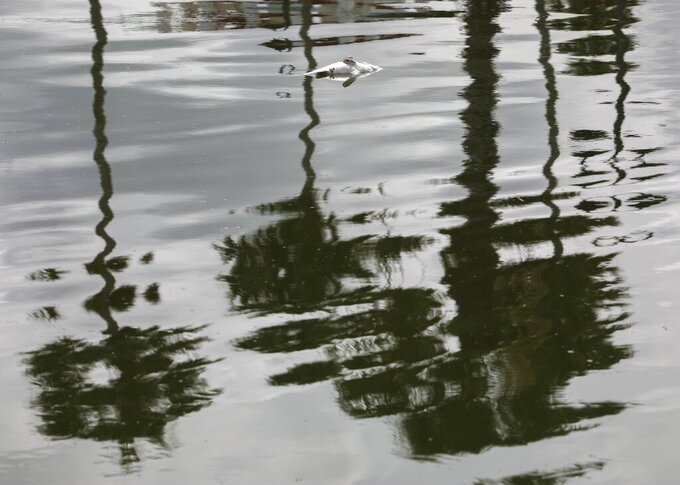 A dead fish is seen floating in the water as palm trees are reflected Thursday, June 17, 2021 in the intracoastal waters between Clearwater and Dunedin, Fla. Pinellas County had small boats retrieving dead fish in Dunedin and around Clearwater Harbor Thursday. The fish kill is attributed to the recent Red Tide bloom. (Chris Urso /Tampa Bay Times via AP)

TALLAHASSEE, Fla. (AP) — Plumes of toxic oceanic bacteria known as red tide continued to move up the western Florida coast, strewing thousands of dead fish on beaches while state officials tried to reassure Floridians and potential tourists Thursday that the outbreak was being taken seriously but isn't as bad as it would seem.

Gov. Ron DeSantis on Thursday assembled a team of experts in St. Petersburg to describe the work that is underway to better understand and control the latest outbreak.

As the state's economy continues to emerge from the devastation of the coronavirus pandemic, images of beaches littered with dead fish could threaten to keep visitors from flocking to seaside communities during the July 4 holiday.

The governor said it was important to let “folks know that these places are open."

"The hotels, the restaurants, the beaches are open,” he said.

Three years ago, massive blooms of the red tide prompted some beaches to close. The outbreak killed tons of aquatic life, littering coastlines with rotting fish and keeping people off the sand and water.

Widespread images of rotting fish and empty beaches could be catastrophic to the state's tourism industry, which uses the state's ample sunshine, sand and water to lure visitors to the state.

Officials are encouraging people to monitor beach conditions through an online dashboard.

Much of the current outbreak of the red tide bacteria, Karenia brevis, is centered in the Tampa Bay area. Even low concentrations have the potential for killing fish. Higher concentrations could affect some people if they swim in the water or eat contaminated shellfish, including oysters.

Experts assembled by the governor Thursday cautioned against linking the red tide outbreak to millions of gallons of polluted wastewater from an old fertilizer plant in Piney Point.

The experts said it's doubtful the wastewater, which contains elevated levels of nitrogen, caused the red tide but acknowledged that it could be compounding the problem by providing nutrients for the bloom.

"I don’t think that the red tide was originated as a consequence of Piney Point," said Tom Frazer, the state's former science officer and dean of the University of South Florida's College of Marine Science.

Fertilizers and other nutrients flowing into the coast from lawns, farms and septic tanks can also encourage blooms to spread.

DeSantis has made the environment a key part of his agenda, including championing restoration of the Everglades and addressing rising concerns over red tides off the coast and the blue-green algae that swarm lakes and other inland waters.

DeSantis reactivated the long-dormant Red Tide Task Force and pushed for $18 million from the Legislature to fund projects over six years.

Some environmental groups have applauded those efforts but say they have fallen short or that other policies, particularly those that encourage certain developments, contradict his environmental goals.

“What we can use is the knowledge that we can gain to develop innovative technologies to decrease the impacts of red tide when it does occur,” he said, adding that researchers are looking into ways, including chemicals, to inhibit the bacteria from spreading.