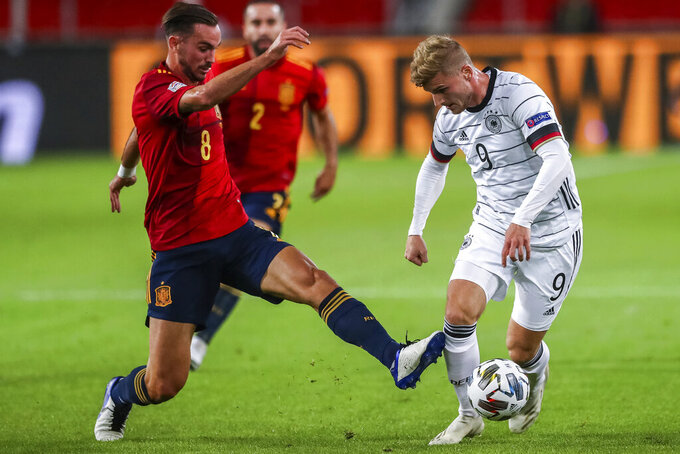 It was the height of the coronavirus outbreak, cost-cutting was rife across English soccer and beyond, and a top official at one of the world’s richest clubs was delivering a sobering message.

“Nobody should be under any illusions,” Manchester United executive chairman Ed Woodward said at a fans’ forum in April, “about the scale of the challenge facing everyone in football. It may not be ‘business as usual’ for any clubs, including ourselves, in the transfer market this summer.”

Amid widespread belt-tightening across most of European soccer during a pandemic, Chelsea has flexed its financial muscles by embarking on a 200 million pounds ($250 million) spending spree to overhaul half of its team and thrust itself back in the Premier League title conversation.

It evoked memories of 2003 when Russian oligarch Roman Abramovich marked the start of his tenure as owner of the southwest London club by spending around 120 million pounds on 13 new players, ushering in an era that changed the landscape of the English game.

Seventeen years on, will the arrival at Stamford Bridge of striker Timo Werner, attacking midfielders Kai Havertz and Hakim Ziyech, and defenders Ben Chilwell and Thiago Silva do the same?

A look at the questions raised by Chelsea’s staggering outlay this offseason:

There were concerns in 2018 about Abramovich’s ongoing commitment at Chelsea after his British visa expired and the proposed costly development of Stamford Bridge was postponed. Pushing ahead with the club’s biggest offseason spending spree has put those fears to bed. Chelsea has acted with a mixture of opportunism, force of circumstance, and impressive business acumen. A FIFA-issued transfer embargo — overturned after serving half the ban — for breaking transfer rules that protect youth players meant two windows passed (mid-2019 and January 2020) without any players being signed except for Mateo Kovacic’s loan being made permanent. Add to that the money recouped by selling Alvaro Morata and Eden Hazard for combined fees potentially totalling $240 million, and Chelsea had plenty of cash to play with notwithstanding the pandemic. With UEFA temporarily easing its rules for monitoring spending, Chelsea spotted an opportunity while other top clubs deliberated over how to negotiate soccer’s financial crisis. The signing of the 21-year-old Havertz, widely regarded as a future world superstar, for $92 million is a move Chelsea’s rivals weren't willing to make in uncertain times. Liverpool also baulked at bringing in Werner from Leipzig for $68 million, so Chelsea swooped in.

The new-look Chelsea promises to be English soccer’s new entertainers. A likely first-choice attack of Werner as the lone striker, flanked by Christian Pulisic (left) and Ziyech (right) and with Havertz just in behind, is a fairly mouthwatering prospect and should provide the incisiveness the team often lacked last season — especially against opponents who sat back and defended in numbers. Havertz is the signature signing, with the Germany international offering versatility by being able to play as a center forward as well as across midfield. The onus will be on N’Golo Kante and Kovacic to do the defensive work deeper in midfield, while the experienced Thiago Silva should slot in at center back alongside either Antonio Rudiger or Kurt Zouma, and Chilwell will replace Marcos Alonso on the left.

Despite the heavy spending, Chelsea has failed to address arguably its biggest weakness. Kepa Arrizabalaga — signed in 2018 for $92 million, a world-record fee for a goalkeeper — struggled so much last season with his shot-stopping and command of his area that he lost his place to 38-year-old backup Willy Caballero. Chelsea conceded 54 goals in the league, more than any other team in the top 10, and let in 79 goals in all competitions for its worst defensive record in a single campaign since 1990-91. With Thiago Silva, 35, new to the pace and intensity of the English game and Chilwell better going forward than defending, there’s no guarantee Chelsea’s defense will be shored up.

The glut of expensive arrivals leaves Chelsea with a bloated squad and a number of international players potentially questioning their futures. With Havertz likely taking up the playmaker role, where does this leave England players Ross Barkley and Ruben Loftus-Cheek? One of Tammy Abraham (England) and Oliver Giroud (France) will drop to third-choice striker for the season, while Belgium’s Michy Batshuayi now looks completely out of the picture. There were high hopes for attacking midfielder Mason Mount, winger Callum Hudson-Odoi and defender Fikayo Tomori — three youngsters to whom manager Frank Lampard gave increased game time last season — but where do they stand now? “If you are a young player who has a foot in and the club brings in players around you that raise levels, the players should, and hopefully will, raise their levels and everybody improves," Lampard said on Thursday. "I'll be fair and I won't pick the team on whether you came through the academy or not.”

Lampard, Chelsea’s all-time record goalscorer, arrived at the start of the 2019-20 season as a club great but a rookie manager. And with the transfer embargo hovering over the club, expectations were tempered and he had more freedom to bring through those talented English youngsters. A year later, they are likely being shoved aside by big-name arrivals from abroad and the pressure is now firmly on Lampard to deliver. There are no excuses now for a coach heading into just his third year in management. “I didn’t come into this job to fight for fourth place,” Lampard said. “I didn’t come here just to bring academy players into the team and say I gave debuts to this many players. I came here to win. It changes the landscape, yes. But I'm excited by that, more than feeling the pressure.”