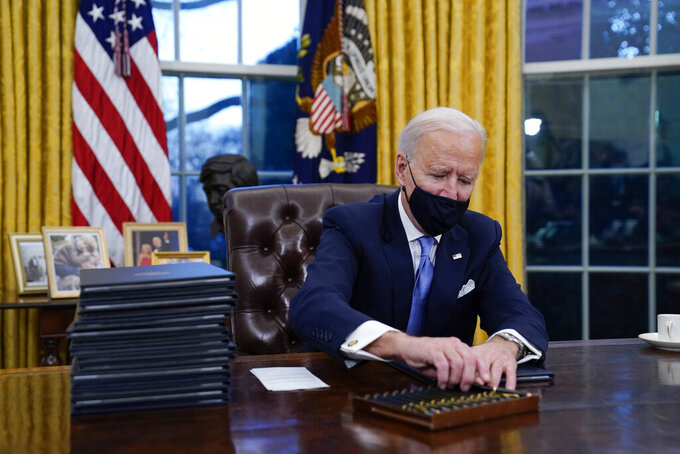 FILE - In this Jan. 20, 2021, file photo, President Joe Biden reaches for a pen to sign his first executive order in the Oval Office of the White House in Washington. Biden arrived at the White House ready to wield his pen to dismantle Donald Trump’s legacy and begin pushing his own priorities.  (AP Photo/Evan Vucci, File)

BATON ROUGE, La. (AP) — Louisiana's Republican congressional delegation wasn't searching for reasons to support President Joe Biden, but the Democratic leader's quick actions against fossil fuels ensured the GOP lawmakers from an oil and gas production state had an easy point of attack to hammer him.

Biden's decisions to pause new oil and gas drilling leases on federal land and waters including the Gulf of Mexico, cut subsidies for fossil fuel industries and stop construction on the long-disputed Keystone XL oil pipeline aim to combat the worst of climate change.

But the executive actions target an industry that has long been an economic engine for Louisiana, accounting for hundreds of thousands of jobs. And the timing comes as the industry is grappling with declining prices and a recession amid international feuds and the coronavirus pandemic.

“Biden’s executive orders are counterproductive. They eliminate jobs and send them overseas to countries with worse environmental standards, increasing global emissions,” U.S. Sen. Bill Cassidy said in a statement. “We don’t need symbolism — we need solutions. So far, all we are seeing from this administration is an ‘energy’ agenda that betrays the working Americans who thought that this president was going to work for them.”

“The Biden ban on new oil and gas leasing will cost America tens of thousands of jobs, many of them in Louisiana," Kennedy said in a statement. “The energy industry is the lifeblood of our state, and we can’t afford to sacrifice jobs at a time when Louisianians are still recovering from the pandemic. Since the energy industry funds Louisiana’s conservation efforts, our storm-battered coasts can’t afford the Biden ban either.”

Biden wants to shift the nation's focus from fossil fuels to cleaner alternatives, such as wind and solar energy, with a goal of eliminating pollution from fossil fuel in the power sector by 2035 and from the U.S. economy overall by 2050. The president suggests his directives will create jobs in renewable energy and other sectors that can offset the lost employment in oil, natural gas and coal industries.

He said the nation can't wait to address human-caused global warming: “It is time to act.”

In Louisiana, climate destruction is a noticeable reality, with strengthening hurricanes and an evaporating coastline. But the oil and gas industry — through drilling operations, refineries and service companies — drives so much economic activity that residents have had to find a way to reconcile support for the industry while grappling with its environmental impacts. Money from oil and gas production activities is steered to coastal restoration work in the state.

The Louisiana Association of Business and Industry said the oil and gas industry accounts for nearly 30% of the state's gross domestic product and nearly 250,000 people in the state have jobs tied to oil and gas and its affiliated sectors. More than 90% of the state's energy production activities are in the Gulf of Mexico, according to association President Stephen Waguespack.

“The businesses hurt most by this action are not the larger entities that can likely rotate investments to other countries, but rather, the homegrown Louisiana entrepreneurs who have built their companies, restaurants and stores over the years from scratch to service our energy producers in communities all across our coast,” Waguespack said in a statement.

The pause on drilling leases doesn't affect existing leases — or the drilling permits stockpiled by companies that haven't been used and can allow them to keep pumping oil and gas for years.

Louisiana's members of Congress said the state and the nation can't afford to wait and see what the fallout will be, and they are sending out near daily statements trashing the new president's actions.