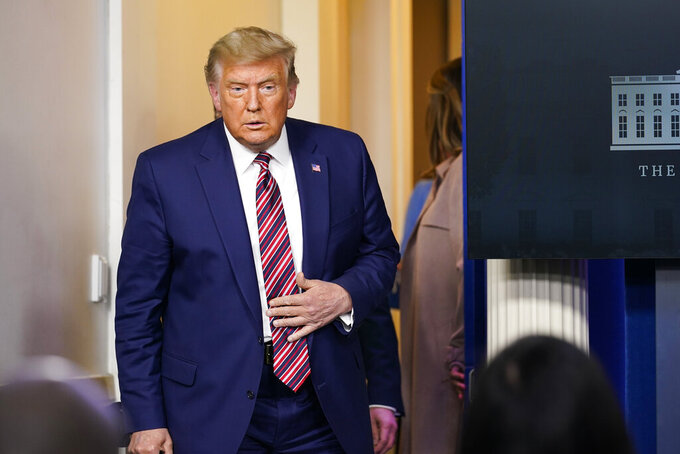 President Donald Trump arrives to speak at a news conference in the briefing room at the White House in Washington, Friday, Nov. 20, 2020. (AP Photo/Susan Walsh)

WASHINGTON (AP) — Republicans in Congress are engaged in a risky but calculated bet that once President Donald Trump has exhausted his legal challenges to the election, he will come to grips with his loss to President-elect Joe Biden.

But the opposite is happening.

As one Trump court case after another falls by the wayside, Trump is doubling down on efforts to disrupt the election outcome. Rather than accept the reality of the vote, the president is using the weight of his office to try to squash it. He summoned Michigan state lawmakers to the White House on Friday after personally reaching out to GOP officials ahead of next week's deadline to certify election results. Others from Pennsylvania may similarly be invited in.

Republicans are standing by as it all unfolds. What started as a GOP strategy to give the president the time and space he needed to process his defeat is now spiraling into an unprecedented challenge to the election outcome like nothing since the Civil War.

With their silence, the Republican lawmakers are falling in one step deeper with the president they have spent four years trying to appease. A few have spoken up. But mostly the Republicans are enabling Trump as he wages an unsubstantiated attack on the election that threatens to erode civic trust and impede Biden’s transition to the White House. It could define careers for years to come.

"It’s making future stars of the Republican Party look tiny and small,” Brinkley said. “All of these senators are going to carry a dark mark on their legacy for coddling Trump after he lost.”

Republicans started with a simple premise: If Trump had concerns about fraudulent voting, as he widely claimed, go to court and make the case.

It was a way to buy time, give Trump a chance to bring evidence, and perhaps convince some of his most ardent supporters of the outcome. Biden now has won 80 million votes to Trump's 74 million.

But in one state after another, from Arizona to Georgia, the Trump cases are failing. Trump forced recounts Friday in two counties in Wisconsin. More legal action is expected there and cases are pending elsewhere. Nowhere has evidence been presented of widespread voter fraud on a scale that could alter the outcome.

The Republican lawmakers will soon be forced into a moment of truth with key upcoming deadlines.

States are expected to certify election results by Dec. 8, and Republican lawmakers have been eyeing the Dec. 14 Electoral College deadline as their own offramp from Trump’s presidency.

That’s when GOP lawmakers believe they can start saying publicly what many of them already suggest in private — that Biden, in fact, won the election.

But there's no guarantee their gamble will work. Rather than glide toward that outcome, Trump is digging in — moving beyond the GOP argument that it’s about counting legal votes and halting illegal ones to more broadly trying to overturn results.

Trump has talked openly about stacking the Electoral College, where electors are typically determined by the outcome in the states, with his backers.

“I won, by the way," Trump said Friday at the White House. "We’ll find that out.”

Almost none of the top Republican leaders in the House or Senate responded directly Friday when asked by The Associated Press if they believe the states have any reason not to certify their election results.

Only Rep. Liz Cheney, the No. 3 Republican in the House, and the daughter of the former vice president, said if Trump is unsatisfied with the outcome of the legal battles, he can appeal.

“If the president cannot prove these claims or demonstrate that they would change the election result,” Cheney said in a statement to the AP, "he should fulfill his oath to preserve, protect and defend the Constitution of the United States by respecting the sanctity of our electoral process.”

Trump rejected Cheney's view in a tweet Saturday night that also took aim at her past opposition to withdrawing troops from Afghanistan and Iraq: “Sorry Liz, can’t accept the results of an election with hundreds of thousands of fraudulent votes cast, enough to easily flip the Election. You’re just unhappy that I’m bringing the troops back home where they belong!”

One key lawmaker, Sen. Pat Toomey, from battleground Pennsylvania, took Saturday's ruling throwing out Trump's lawsuit over the state's vote as an opportunity to assert that Trump had exhausted “all plausible legal options” to challenge the result in Pennsylvania and to declare that Biden's election had been confirmed.

“I congratulate President-elect Biden and Vice President-elect Kamala Harris on their victory. They are both dedicated public servants and I will be praying for them and for our country,” Toomey said in a statement. He encouraged Trump to “accept the outcome” and facilitate the transition.

With the Capitol still partly shuttered due to the COVID-19 crisis and emptying out for the upcoming Thanksgiving holiday, lawmakers are able to deflect many questions about their positions.

Sen. Josh Hawley, R-Mo., said Friday he wasn't really familiar with what Trump was doing inviting the Michigan lawmakers to the White House.

“I don’t really have concerns with him talking about the situation with elected officials,” Hawley said at the Capitol as he opened the Senate for a perfunctory session.

Asked if Trump could overturn the election, Hawley was noncommittal: “Anything’s possible.”

Republicans are calculating that it's better not to provoke the president — he may do something more severe — but let time take its course.

It's a strategy they have used throughout the Trump presidency, keeping him close so as not to alienate his supporters — whom they need for their own reelections — and not getting too involved when he strains the nation's civic norms.

With the upcoming Senate runoff elections in Georgia that will decide which party controls the Senate in January, Republicans are beholden to Trump’s supporters to turn out the vote.

“In all the presidential elections we go through this process,” he said. “What we all say about it is irrelevant.”

McConnell said once the state certifications occur, "if they occur," the elections will wrap up.

“One of the beauties of the American electoral system is that we have 50 separate ways to conduct them,” he said. “The decisions as to how elections end happen in 50 different places.”

The office of Rep. Kevin McCarthy, the House GOP leader, referred to his comments earlier this week when he said, “the states should finish their work.”

Meanwhile, the state tallies continue to roll in.

Georgia certified its results Friday after a hand recount found that Biden won by a margin of 12,670 votes, the first Democratic presidential candidate to win the state since 1992. Michigan is scheduled to certify its results Monday. Pennsylvania will soon follow.

The electors are set to present their votes Jan. 6, two weeks before the Jan. 20 inauguration.

This story has been corrected to show that the deadline to certify election results is Dec. 8, not Dec. 6.