Analysis: Will voters want a president who feels their pain? 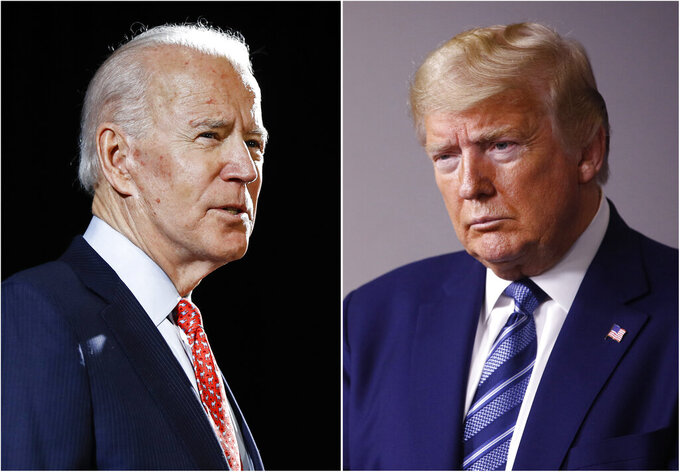 FILE - In this combination of file photos, former Vice President Joe Biden speaks in Wilmington, Del., on March 12, 2020, left, and President Donald Trump speaks at the White House in Washington on April 5, 2020. Early polling in the general election face-off between Trump and Biden bears out a gap between the two contenders when it comes to who Americans see as more compassionate to their concerns. (AP Photo, File)

WASHINGTON (AP) — In 1992, Americans ousted an incumbent president in the middle of an economic downturn because his challenger, Bill Clinton, seemed to better feel their pain.

Twenty years later, when the nation was still climbing out of another recession, voters stuck with President Barack Obama rather than siding with challenger Mitt Romney, who was caught on tape dismissing half the population as people who “believe they are the victims.”

Voters may again be seeking solace, as well as solutions, in this year’s presidential race, one still being reshaped by the unprecedented public health and economic turmoil of the coronavirus pandemic.

And if empathy is the question, the contrast is stark and the challenge for President Donald Trump may be steep. Though he has a visceral bond with his most loyal supporters, he’s far more likely to use grievance or even biting humor to make his case. His presumptive Democratic challenger, Joe Biden, meanwhile, is a politician defined by personal grief and loss, who has long had an ability to use his own family tragedies to connect with voters.

Early polling in the general election face-off between Trump and Biden bears out a gap between the two contenders when it comes to who Americans see as more compassionate to their concerns.

“I think voters have recognized these traits in him all along, and will continue to because that’s who he is and has always been,” said Jack Markell, the former governor of Delaware and a Biden supporter.

Empathy has often been an intangible in presidential politics, helping some contenders overcome glaring weaknesses and sinking others who fail to display a genuine human connection with voters dealing with economic pain and other hardships.

Biden witnessed that firsthand as Obama’s vice president during their 2012 reelection campaign. At the time, the economic recovery from the 2008 recession was sluggish at best and the unemployment rate still hovered around 8%. Yet polls showed voters overwhelmingly saw Obama as more empathetic to their economic struggles — particularly after Romney, a millionaire businessman, told wealthy donors that 47% of Americans viewed themselves as victims and thought they were entitled to government aid.

Biden arguably has more of a common touch than Obama, who may have bested Romney on empathy but was still often seen as cerebral and professorial. Biden is the opposite: a tactile, emotional politician whose own searing personal losses have played out in the public eye over decades.

Just weeks after he was first elected to the Senate in 1972, Biden’s wife and infant daughter were killed in a car accident. In 2015, while he was serving as vice president, his son Beau succumbed to brain cancer.

Though Biden can stumble through scripted campaign settings, he’s often at his best after events, when he wades into the crowd to greet voters one-on-one. It’s not uncommon to find voters who have come to share with Biden their own personal story of loss — nor is it uncommon for Biden to hand out his personal cellphone number, particularly to those whose lives have been touched by cancer.

He nearly revealed his phone number during a nationally televised town hall last month when he took questions from Americans fearful about the growing pandemic and worried about the economic fallout.

“Not that I’m an expert, but just having been there ... I’m so sorry for you,” Biden said, his voice filling with emotion.

Biden’s campaign is trying to use these moments for maximum political impact — although social distancing guidelines have made it a challenge.

Last week the campaign launched what it’s calling “virtual ropelines” — 45-minute Zoom calls with a group of eight supporters. The campaign plans to make at least part of those conversations public.

Trump rarely puts himself in a small-group setting — either in person or virtually. His sustained, one-on-one interactions with voters are infrequent. He instead prefers commanding an audience from behind a podium at large campaign rallies — where he's more likely to make people laugh than cry.

Though he has held meetings during the pandemic with business executives, faith leaders and health care representatives, his most visible interactions in recent days have been with reporters at lengthy White House briefings.

The Republican president often opens his daily briefings with prepared remarks in which he pays tribute to Americans facing difficulties. On Friday, he said he prayed that God “will heal the sick and comfort the heartbroken and bless our heroes.”

But those overtures are often quickly overshadowed by the president’s sparring with journalists, criticism of governors who say they can’t get the supplies their states need and his often inaccurate claims about solutions on the horizon. It's all punctuated by his social media posts, in which he frequently touts the television ratings for the coronavirus briefings.

Some of Trump’s allies cringe at those comments but also know well that there is little that can be done to change the president’s approach. Throughout his presidency, Trump has mingled moments of sorrow and challenge with political combat, perhaps most notably when he spent days publicly feuding with the mayor of San Juan, Puerto Rico, after a hurricane devastated the American territory.

That approach might doom other politicians. But Trump has repeatedly upended political norms, casting aside the traditional expectations many Americans have for their president, even in the midst of a crisis.

Tim Pawlenty, the former governor of Minnesota and a Republican, said that while Trump is not always outwardly compassionate, his actions may matter more than his words.

“If you’re drowning and one bystander says they understand while another says nothing but tosses you a life vest — which person is more empathetic?” Pawlenty said.

At the end of Friday’s briefing — Trump's longest to date, at 2 hours, 16 minutes — the president briefly revealed, in his own way, that the crisis has struck an emotional chord.

“These are the saddest news conferences that I’ve ever had,” Trump said. “I don’t like doing them. You know why? I’m talking about death.”

EDITOR'S NOTE — Julie Pace has covered the White House and politics for the AP since 2007. Follow her at https://twitter.com/jpaceDC.