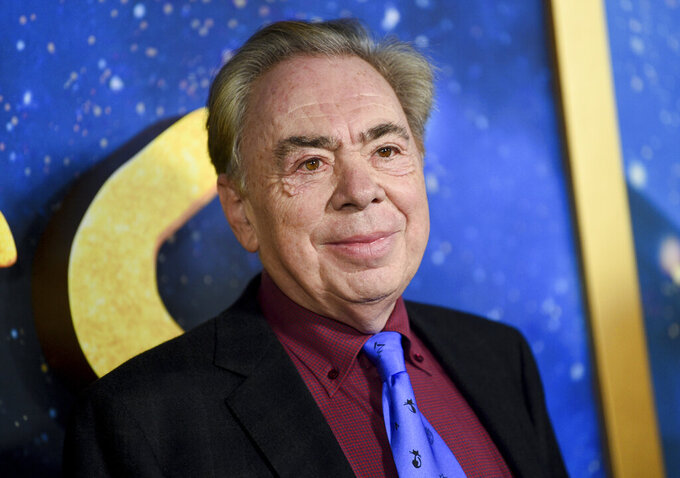 FILE - This Dec. 16, 2019 file photo shows composer and executive producer Andrew Lloyd Webber attending the world premiere of "Cats" in New York. Webber is celebrating the 50th anniversary of the release of his “Jesus Christ Superstar” album with the first single from his latest musical — “Cinderella.” The song is called “Bad Cinderella” and is sung by Carrie Hope Fletcher, who plays the title character in what is being billed as a “complete reinvention of the classic fairytale.” (Photo by Evan Agostini/Invision/AP, File)

NEW YORK (AP) — Andrew Lloyd Webber is celebrating the 50th anniversary of the release of his “Jesus Christ Superstar” album with the first single from his latest musical, “Cinderella.”

The rollicking song is called “Bad Cinderella” and it's sung by Carrie Hope Fletcher, who will play the title character in what is being billed as a “complete reinvention of the classic fairytale.”

The single is a portrait of a fearsome woman standing apart from society's rules: “They call me a wretch/A witch/Well, choose one,” the heroine sings. “Every fairytale for sure can use one/Sorry I'm so rude/Sorry you're so lame/I won't play your game.”

Lloyd Webber and his cast were ready to start rehearsals in the spring in London when they — and many theaters across the globe — were stopped by the virus pandemic. Waiting has been frustrating and he and the cast recorded the cast album in their homes during lockdown. He hopes releasing music will help.

“We couldn’t find any other way to getting it out,” said the composer Thursday from the bar in the London Palladium as he waited for a listening party for the upcoming clutch of songs. “It’s the only way I could get my music out and present the score.”

Fifty years ago this month, Lloyd Webber and lyricist Tim Rice, unable to get any theaters to put on a production of “Jesus Christ Superstar,” switched the regular order and released a cast album first.

That led to interest and set Lloyd Webber on a steady course to musical and theatrical superstardom, with such shows as “Cats,” “Phantom of the Opera” and “Evita.”

“The reason it came out first is because nobody in the world wanted to produce it because they thought it was such a terrible idea,” he said.

“The irony of 50 years later my having to do another concept album because I’m not able to get my show on stage has suddenly not been lost on me.”

The new stage musical “Cinderella” features a brand new score from Lloyd Webber with lyrics by David Zippel. Lloyd Webber hopes it will open next spring in the West End at the Gillian Lynne Theatre. He's already teased it with a social media video of the song “Far Too Late.”

During the shutdown, Lloyd Webber has been busy on social media — dancing on TikTok, sharing videos on Twitter and making Spotify playlists — as well as permitting the free streaming of his shows to benefit The Actors Fund and other international organizations

He also has been readying his London theaters for a post-pandemic reopening. He owns or co-owns seven West End theaters including the Gillian Lynne Theatre, Her Majesty’s Theatre, Theatre Royal Drury Lane and the London Palladium.

“I decided that we’re not shutting down, actually. We’re going to actually do essential work and improvements to the buildings,” Lloyd Webber said. That has meant such things as new bathrooms and state-of-the-art ventilations systems.

“I hope all the theaters, when they reopen, will be in an incredible state to go forward and try and make something of a virtue out of this whole COVID situation,” he said.