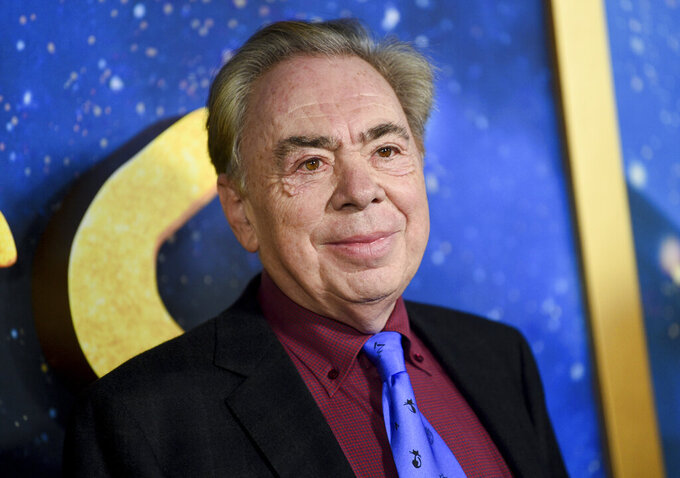 FILE - This Dec. 16, 2019 file photo shows composer and executive producer Andrew Lloyd Webber attending the world premiere of "Cats" in New York. Webber is making some of his filmed musicals available for free on YouTube. On Friday, the 2000 West End adaption of “Joseph and he Amazing Technicolor Dreamcoat” starring Donny Osmond will be streamable, followed a week later by the rock classic “Jesus Christ Superstar” from the 2012 arena show starring Tim Minchin. (Photo by Evan Agostini/Invision/AP, FIle)

Iconic composer Andrew Lloyd Webber is making some of his filmed musicals available for free on YouTube.

On Friday, the 2000 West End adaption of “Joseph and the Amazing Technicolor Dreamcoat” starring Donny Osmond will be streamable, followed a week later by the rock classic “Jesus Christ Superstar” from the 2012 arena show starring Tim Minchin.

Further shows will be announced later, all hosted by the YouTube channel The Show Must Go On. Each show will be available at 2 p.m. Eastern/11 a.m. Pacific for a 48-hour period online, with no charge or sign up required.

The actor and chairman of the board of The Actors Fund announced the news of his diagnosis in a Twitter video, reassuring fans that he was already beginning to feel better. He says his wife and son don't have symptoms.

In a statement, The Actors Fund said Mitchell's diagnosis is an example “of why it is vitally important that we each do everything we can to slow the spread of this virus.”

Mitchell won a Tony for his lead performance in the 1999 musical "Kiss Me, Kate." Other Broadway figures who have tested positive include Gavin Creel, Aaron Tveit and Laura Bell Bundy as well as composer David Bryan. It has claimed the life of four-time Tony-winning playwright Terrence McNally.

Carnegie Hall has canceled the rest of its season because of the new coronavirus and is projecting a $9 million operating deficit on its $104 million budget.

The Lyric Opera of Chicago also scrapped the remainder of its season.

In a statement Thursday, Carnegie says it is "assessing the Hall's overall programming and operations with an eye to redefining them for the next and future seasons in response to the changed economic conditions."

"It will take considerable time, even after we reopen Carnegie Hall, before we can expect to see a full recovery, and, even then, this is likely to be over an extended period," executive director Clive Gillinson says. "With this in mind, we are taking immediate steps to safeguard the fiscal health of our institution as well as plan creatively for the future."

Carnegie canceled all events in its auditoriums through July 25. It also called off summer tours for its National Youth Orchestra of the USA, NYO2 and NYO Jazz but hopes to host the musicians and have local events around residencies at suburban Purchase College.

Carnegie expects to re-open in mid-September ahead of opening night on Oct. 7.

The Lyric Opera postponed its production of the musical "42nd Street" from May 29-June 21 this year to the spring of 2022. The staging is from Paris' Theatre du Chatelet.