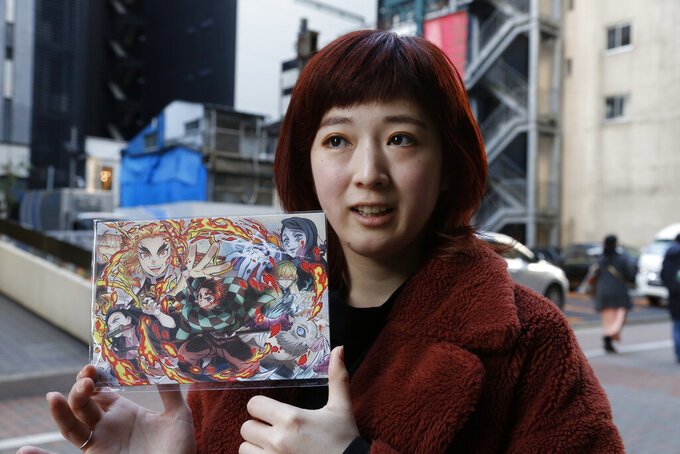 Japanese hairstylist Akina Nasu shows a picture she got when she went to see the film “Demon Slayer,” which has become the nation’s top-grossing film, and opened in Miami to be eligible for the 2021 Academy Awards, in Tokyo Wednesday, March 3, 2021. Nasu and other fans says they identify with the story because of the hardships and fears during the coronavirus pandemic. (AP Photo/Yuri Kageyama) 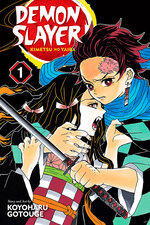 TOKYO (AP) — The demons are everywhere, sometimes spreading like purple slime, lurking, killing. The terrifying plight depicted in the swashbuckling animated film, “Demon Slayer: Kimetsu no Yaiba the Movie: Mugen Train,” has struck a chord with pandemic-era Japan, and possibly with the world.

“Demon Slayer” has become the biggest grossing film for Japan, surpassing live-action films and even Hayao Miyazaki’s “Spirited Away.”

The 2020 film, directed by Haruo Sotozaki, got a limited run in Miami, starting last month. A U.S. run is required to be eligible for the 2021 Academy Awards. Nominations are announced March 15, for the April 25 awards ceremony.

Akina Nasu, a Tokyo hairstylist, says the story of a spiritually pure hero trying to save lives despite adversity struck home, especially amid a pandemic.

“There are many characters, but each one, even the demons, have their own unique stories. People can really empathize with their experience,” she said.

Nasu got so enwrapped in a scene she cried in the theater. She said she identifies closely with the main character’s sense of justice.

The theme is perennial: Family love and the universal yearning for that simple normal lifestyle, perhaps taken for granted until the sudden appearance of the demons, or COVID-19, as some fans, like Nasu, are seeing metaphorically.

Like the rest of the world, Japan has been hurt by the pandemic, not only economically but also psychologically. People are worried. Some are in mourning. The nation has seen about 8,000 related deaths, much fewer than some nations, but they are rising. The vaccine rollout has barely started.

Japan has never had a lockdown, and movie theaters are open with social-distancing measures.

The hero of “Demon Slayer” is Tanjiro Kamado, who sets out to become a warrior to save his sister, and ultimately the world, from the demons, or “oni.” Like a cute doe-eyed Musashi, the legendary swordsman, he displays his samurai techniques in a flurry of colorful animation.

The movie, which takes place on a nightmarish train ride, follows a hit TV animation series, now streaming on Netflix.

Its second season airs in Japan later this year but has already stirred controversy over its appropriateness for children. The setting is a brothel, although there is no graphic sex depicted.

The original comic series ran in weekly magazine Shukan Shonen Jump, from 2016, written and drawn by Koyoharu Gotouge, a pen name. The author has never appeared in public, though the “Time 100 Next” list named them among the “emerging leaders who are shaping the future.”

Andy Nakatani, Shonen Jump editor-in-chief at VIZ Media, the American manga publisher and distributor, says “Demon Slayer,” is one of its top-sellers with more than 3 million copies in print in the U.S.

“Through it all, he manages to thrive, grow, and somehow he never gives up hope and is able to maintain the core of who he is. Maybe with all the things going on in the world today, this story of perseverance just particularly resonates with people,” said Nakatani.

In Japan, “Demon Slayer” has spun off video games, toy figures, copycat products of the hero’s earrings and Happy Meal stickers at McDonald’s. The theme songs by LiSA are pop hits.

Stu Levy, founder and chief executive of TOKYOPOP, an American distributor and publisher of anime and manga, loves the way “Demon Slayer” brought together Japanese folklore “with a modern hipness.”

“It has the same appeal that the best zombie shows like ‘The Walking Dead’ have to Americans,” he said, adding he tried to acquire the rights to “Demon Slayer,” but they went to a competitor.