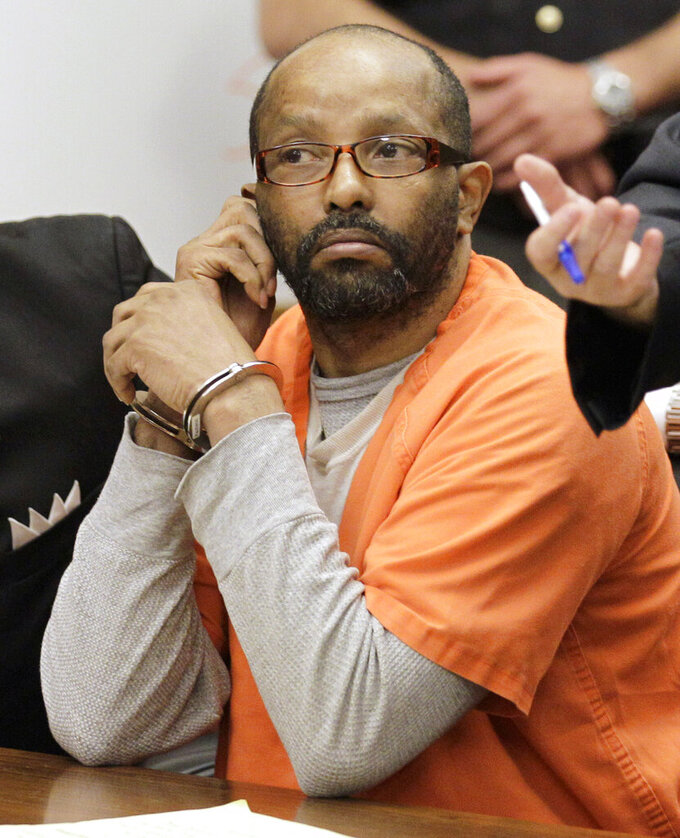 FILE - In this May 10, 2011 file photo, Anthony Sowell appears in court in Cleveland. Sowell, an Ohio man sentenced to death for killing 11 women and hiding their remains in and around his home has died in prison. The state Corrections Department says the 61-year-old convicted serial killer was receiving end-of-life care at Franklin Medical Center for a terminal illness when he died Monday, Feb. 8, 2021. (AP Photo/Amy Sancetta, File) 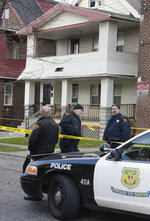 COLUMBUS, Ohio (AP) — Anthony Sowell, sentenced to death for killing 11 women and hiding their remains in and around his home in a case that raised concerns about authorities downplaying the plight of missing Black women, has died in prison of an illness.

Sowell, 61, had been receiving end-of-life care at Franklin Medical Center for a terminal illness when he died Monday, said JoEllen Smith, spokesperson for the Ohio Department of Rehabilitation and Correction. The death was not related to COVID-19, she said.

Cleveland police were investigating a rape case in October 2009 when they searched Sowell's house and discovered two bodies. They eventually uncovered the remains of 11 women.

Most of the victims had struggled with addiction and died of strangulation, prosecutors said. Some had been decapitated, and the bodies of others were decomposed to such an extent that coroners couldn’t be sure how they died.

In interviews with police, Sowell said he targeted women who reminded him of his ex-girlfriend, who had been addicted to cocaine and left him shortly before the killings began.

Neighbors had blamed a stench from the rotting bodies on an adjacent sausage factory, which spent $20,000 on new plumbing fixtures and sewer lines to try to make the smell go away.

The case was a moment of reckoning for Cleveland. Relatives of the slain women, who were Black, and many Black residents said police didn’t take the disappearance of the victims seriously because of their race and troubled backgrounds, and complained about how officers handled missing-person reports. Police said some victims were never reported missing.

In response, Cleveland police overhauled how they handled missing-person and sex crime investigations based on recommendations issued after the remains were found.

Cuyahoga County Prosecutor Michael O'Malley said his “thoughts and prayers” were with the relatives and friends of the victims of Sowell, whom he called a monster.

“My hope is that law enforcement and the criminal justice system have learned from the mistakes that allowed this diabolical predator to go undetected for so long,” O'Malley said.

Joann Moore, whose sister, Janice Webb, was among the victims, said Tuesday that she was still trying to process a mixture of emotions.

“The ultimate goal was to see this through and see he got justice,” she said. “That was something else we weren’t able to see, him take his last breath.”

“I still miss my sister. I know she’s watching down on her son and his kids, and her siblings,” Moore said.

Sowell “could have been stopped years before if we had done our job,” said former Cleveland City Council member Zack Reed, whose East Side ward included Sowell's house. He said it was regrettable the sausage company was never compensated for the upgrades it made.

Cleveland police failed to connect the dots and realize that missing women, many addicted to drugs and living on the fringe of society, had been murdered by one individual, Reed said Tuesday.

“We didn’t thoroughly investigate those missing women,” he said. “We didn’t take their families and the community seriously.”

Sowell was convicted in 2011 and sentenced to die for killing the women. He was also convicted of raping two other women and attempting to rape another. His execution had not been scheduled.

Sowell was a former Marine who had a brutal childhood and struggled with his mental health, John Parker, one of his defense attorneys, said Tuesday.

“He was not a monster and not evil,” Parker said. “He was damaged by childhood abuse and serious mental health problems. May he rest in peace.”

In 2014, ground was broken on a memorial at the site where Sowell's victims’ remains were found.

In 2019, Cleveland settled a lawsuit filed by two of Sowell's survivors. The women claimed that a police detective mishandled the investigation of accusations against Sowell, allowing him to remain free and victimize more women.

Sowell had continued to appeal his case. As recently as May, a three-judge panel with the 8th District Court of Appeals unanimously held that Sowell failed to present enough evidence that he did not receive a fair trial and that his trial attorneys ineffectively represented him during the penalty phase.

Associated Press writers John Seewer in Toledo and Mark Gillispie in Cleveland contributed to this report.