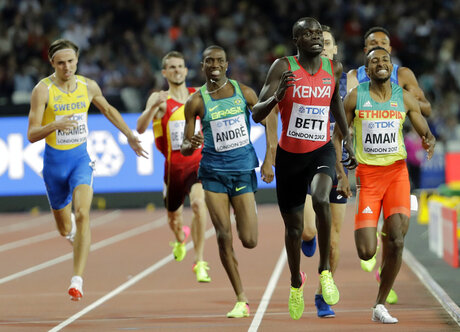 By: GERALD IMRAY (AP)
Copyright 2020 The Associated Press. All rights reserved. This material may not be published, broadcast, rewritten or redistributed.

Kenya's first WADA-approved drug-testing laboratory will be operational early next month, anti-doping authorities said Monday as they aim to close a loophole that some fear had allowed athletes from the East African distance-running powerhouse to beat controls for years.

The lab in the capital, Nairobi, will focus on blood analyses, although it will also be able to carry out other doping tests, the Athletics Integrity Unit said.

It is the first World Anti-Doping Agency-approved facility in East Africa, and the only one in Africa after South Africa's lab had its accreditation revoked last year.

The AIU is the independent unit set up in 2017 to prosecute doping cases in international track and field. It funded the Kenyan laboratory with help from athletics governing body, the IAAF.

Previously, blood samples taken from Kenya's world-beating distance runners had to be flown to South Africa or, more recently, Europe to be tested at an approved lab within 36 hours — a challenging race against time that led to the regular bending of anti-doping rules, as revealed by The Associated Press in 2016.

Blood doping is especially relevant in distance running, where Kenya has been a powerhouse for decades.

The new lab should stop athletes who train in remote regions in the high-altitude west of the country from being given prior warning of out-of-competition tests by sample collectors.

Out-of-competition checks are meant to be sprung on athletes by surprise.

But the time required to reach athletes and get samples to Nairobi — and out of the country to an approved testing lab within the 36-hour limit — had meant it became easier for officials to give a group notice a day before to gather at a specific place to be tested together.

Experts say, though, that drug cheats could use the advance notice to dilute their blood — either by drinking copious amounts of fluid or by infusing saline — and beat the test.

Brett Clothier, head of the AIU, alluded to that on Monday.

"From now on, the analyses of blood samples will be performed locally," he said. "This will give us more efficiency, more responsiveness and less predictability."

Athletics Kenya president Jackson Tuwei said: "It means everything will be easier."

The lab should address similar problems for Ethiopia, which has signs of a doping problem.

The AIU's announcement on the Kenyan lab came a day after it confirmed 2017 world championship bronze medalist Kipyegon Bett of Kenya had failed a doping test.

Bett tested positive for the blood-booster EPO and the 800-meter runner, world junior champion in 2016, faces a four-year ban.

The 20-year-old athlete had already been suspended for evading a doping test. He is the fourth Kenyan to face doping charges in 2018.

They are some of the latest cases casting doubt on Kenyan claims that its top athletes are clean and that doping is confined to lesser-known runners.

The AIU said it collected more than 3,500 blood samples from across the world in 2017. It expects the new lab to handle between 800 and 1,000 a year from the East African region, including Ethiopia, Uganda, Tanzania and Eritrea.

The lab belongs to the Lancet healthcare group. It's not a fully accredited WADA lab, but the world anti-doping organization allows a facility to handle tests for cost and geographic reasons as long as it meets criteria.

Kenya's reputation has been seriously damaged by the upsurge in doping cases in recent years, which has been accompanied by multiple incidents of rule-breaking and corruption.

Kiprop revealed in May he received prior warning of his urine test. He also admitted to giving the doping control officer money for tipping him off.

Kiprop also faces a potential four-year ban. He was elevated to the gold medal at the 2008 Beijing Olympics after Rashid Ramzi was stripped for doping.

Ruth Jebet, the Kenya-born 3,000-meter steeplechase prodigy who won gold at the 2016 Olympics aged 19, was also suspended this year and charged with using EPO.

Jebet, who runs for Bahrain, won the Asian senior title at 16 and broke the world record at 19.