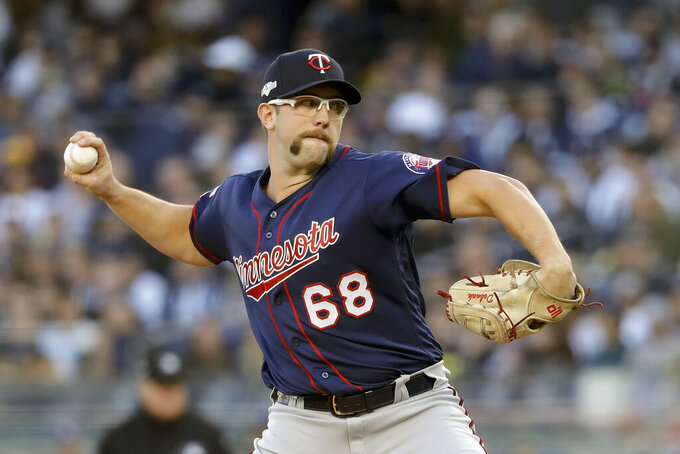 FILE - In this Oct. 5, 2019, file photo, Minnesota Twins starting pitcher Randy Dobnak (68) delivers against the New York Yankees during the first inning of Game 2 of an American League Division Series baseball game, in New York. Finally, major leaguers are on track to resume this virus-abbreviated 2020 season. The hiatus has provided a welcomed dose of extra family time for many, but the unprecedented idling this spring and summer for players used to being on the diamond daily has predictably created a collective antsy feeling around the game. (AP Photo/Frank Franklin II, File)

Randy Dobnak had finished making his morning omelette one day last week when his wife, Aerial, asked the Minnesota Twins pitcher to keep the eggs out so she could make a sandwich.

For the base she used a hot dog bun, an ingredient so bewildering to her husband that he took it as the latest sign that baseball's pandemic-induced hiatus had dragged on too long amid strained negotiations between owners and players over adjusted pay.

“It's time to get back to work,” Dobnak tweeted. “Tell us when and where!”

Finally, major leaguers have their answer. Teams can start training together again next week, with the truncated 60-game season slated to open on July 23 or 24.

“We’re all ready to get back, because baseball’s literally been our lives for our whole entire lives,” Dobnak said in an interview from Hedgesville, West Virginia, where he and his wife have been living with her parents. “To have the last three months now not playing baseball, it’s definitely weird.”

Twins teammate Taylor Rogers, after arriving at home in the Denver area when spring training was canceled in mid-March, quickly found himself in the same strange state of mind that the thousands of pro ballplayers have experienced in recent months.

“I was asking my parents, ‘What’s the weather here this time of year? I don't even remember,'” Rogers said this week, describing his mild case of cabin fever that lingered into the summer. “I've had those days where I didn’t feel like I was in the right place. I thought I had to be somewhere else, even though there’s nowhere else to be.”

Dobnak has a small group of college and high school players in his area he can throw batting practice to, but there are only so many hours in a day the body can handle working out. Video games, often against teammates in other parts of the country, have been a familiar pastime. So has hiking in the mountains with his wife and dog. He's had more opportunity for outreach, checking in on and raising funds for patients at St. Jude's children's hospital, a favorite charity of the couple.

There's always a project to be found around the house, of course, and never a shortage of ways to turn a chore into a competition.

“I want to be the best at it," Dobnak said, "and that translates well into sports, I guess.”

One activity Dobnak has not taken up this year? Uber driving. He still lists his 4.99 rating on his Twitter bio, but such a gig, even pre-pandemic, isn't much in demand in rural Appalachia. His Uber days were in Pittsburgh, his hometown.

Life for San Francisco Giants shortstop Brandon Crawford has been, like many dads around the game, “a little crazy with the kids not having anywhere to go." He has tried to make the most of the unexpected and unique amount of quality time the pandemic has provided his family.

In a word? Legos.

His 7-year-old daughter, Braylyn, helped him rebuild a childhood passion.

“I always loved building them as a kid and had plenty to put together, but only got one or two of the bigger sets,” Crawford said. “Since Braylyn started getting into them this past year, she got a couple bigger sets for Christmas. We put those together and ordered more during this time. We’ve ended up building quite a few now. The kids always seem to help for the first bag or two, but I end up putting the rest of it together. It’s been a fun and relaxing activity to do with them.”

Los Angeles Dodgers pitcher Ross Stripling has had more time for his other job as a financial adviser. He manages about $10 million in assets, with a couple of his teammates among his 10 accounts with B. Riley Wealth Management. He's had this part-time job since 2014, when Tommy John elbow surgery forced him to consider alternatives to baseball and a connection made by his grandfather helped him land an interview with the Houston firm.

“I’m a numbers guy, so the ability to scout and do scouting reports and prepare for a lineup has I think really transferred over from my stock market stuff, being able to scout a lineup and memorize certain stats, what a guy hits 2-1, what a guy swings and misses the most with two strikes,” said Stripling, who has obliged manager Dave Roberts with free advice on many occasions.

Roberts has been impressed by the way Stripling has effectively used the other parts of his brain, praising a well-rounded approach to life that wasn't as widely accepted in the game when he broke in as a player more than two decades ago.

“I love the way things have evolved,” Roberts said. "Ross is a poster child of being the consummate professional, ultimate competitor, but has balance in his life. I think that that’s admired by not only his teammates but people around the league, and for me, that makes him an even better baseball player.”