AP Analysis: Dark days ahead for Lebanon as crisis bites 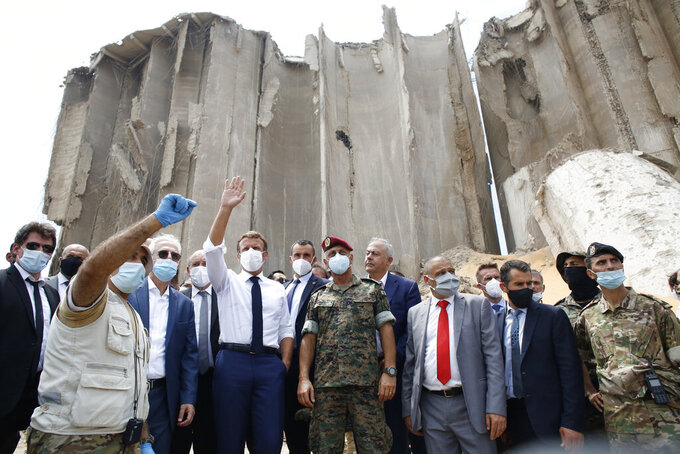 BEIRUT (AP) — In less than a year, Lebanon has been hit by an economic meltdown, mass protests, financial collapse, a virus outbreak and a cataclysmic explosion that virtually wiped out the country’s main port.

Yet Lebanese fear even darker days are ahead.

The country’s foreign reserves are drying up, the local currency is expected to spiral further downward. Lebanese — half of whom are in poverty — soon face yet another leap in basic food prices. Incidents of armed clashes between rival groups are escalating.

Bickering politicians have been unable to form a government, putting an international bailout out of reach. Last week, a French initiative to form a rescue government of specialists fell apart when the political factions split along familiar fault lines, deepened by the U.S.-Iran rivalry.

“Absent a major change in either side’s political calculations, the coming weeks will see continued stalemate, a caretaker government that lacks the capability to implement any serious reforms, and an acceleration of the economic collapse,” said Mike Azar, a former Johns Hopkins SAIS professor of finance.

French President Emmanuel Macron’s plan was widely seen as a last opportunity to charter a way out of Lebanon’s gravest crisis since the 1975-90 civil war. It included a six-month timeline for a small government made up of non-partisan experts to deliver reforms. Mistrustful of Lebanon’s famously corrupt leaders, the West has made billions of dollars in aid contingent on those reforms.

Lebanon’s politicians initially committed to the plan and named a new prime minister-designate, Moustapha Adib, who promised to deliver a Cabinet within two weeks. To avert the usual horse-trading among factions over ministries, Adib tried to pick his own names to form the government.

But the two main Shiite parties, Hezbollah and Amal, accused him of acting on behalf of their local political rivals. They insisted on naming Shiite members of the Cabinet and on keeping the Finance Ministry for their sect. Adib refused and stepped down Saturday.

For all the pressure on the factions to put aside their usual self-serving interest and jockeying, another force is in part making them dig in: escalating U.S.-Iran tensions.

The Trump administration has stepped up its maximum pressure campaign on Iran and its proxy militias, including Hezbollah, ahead of the Nov. 3 U.S. elections.

It slapped sanctions on two senior pro-Hezbollah politicians, including the former finance minister, in the middle of efforts to form the Cabinet. That fueled suspicions Washington was seeking to isolate Hezbollah and diminish its role in any new government.

U.S. Secretary of State Mike Pompeo openly berated Macron for meeting with Hezbollah officials during his visit to Lebanon and promised a wider array of sanctions targeting the group and its local allies.

Hazem al-Amin, an anti-Hezbollah Lebanese journalist and columnist, wrote that the militant group has effectively put the Lebanese public in the middle of an “open confrontation” with the United States.

Writing in the pan-Arab news site Daraj, he said the U.S. is looking to squeeze Hezbollah before the elections, while Hezbollah is trying to wait out the Trump administration, betting on a new president.

But can Lebanon wait?

Last week, Lebanese President Michel Aoun, an ally of Hezbollah, could not have been blunter when he was asked by a reporter where Lebanon was headed if a new government is not formed.

Macron, in a press conference on Sunday, said he was “ashamed” of Lebanon’s political leaders and warned of “a new civil war” if they can’t set aside personal and sectarian interests to unlock international aid.

That aid is more sorely needed than ever, with worse still to come for Lebanese in the country’s slide to the bottom.

In the next few weeks, the Central Bank is expected to end subsidies on basic goods. Since the local currency’s collapse, the bank has been using its depleting reserves to support imports of fuel, wheat and medicine.

Already, after the blow of the financial crisis, half the population is below the poverty line. Lifting subsidies will further fuel inflation and could be a trigger for food riots. Civil unrest would put the population in confrontation with demoralized security forces who — like other Lebanese — have seen their salaries decrease by up to 80% in U.S. dollar terms.

“The threat is very real. There have been a couple of security incidents over the past month that show weapons are around in abundance, and so are idle young men to wield them,” said Heiko Wimmen, project director for Lebanon, Iraq and Syria with the International Crisis Group.

He said turf wars among local armed groups may become a daily occurrence in areas that are not controlled by any political actor and could scale up once groups driven by sectarian and political motivations become involved.

A Beirut landfill is nearing maximum capacity, threatening a new trash crisis. Hospitals struggle to cope with the financial crisis amid a surge in coronavirus cases, triggering warnings of an Italy-like scenario. Medicines are harder to find. Poverty and crime are rising, along with sectarian tensions fanned by politicians seeking to hang on to their seats.

The Aug. 4 explosion at Beirut’s port — blamed on the political leadership’s corruption and incompetence — didn’t just cause pain, death and damage. It struck yet another blow to the economy. Economic activity losses attributed to the blast damage range between $2.9 billion and 3.5 billion, the World Bank estimated. Public sector reconstruction and recovery requires some $1.8 billion to $2.2 billion — funds that are nowhere seen on the horizon.

Even if a government is formed, Lebanon will not be out of the woods. IMF negotiations failed in July because Lebanese actors could not agree among themselves.

Wimmen said the core of the problem are political elites who have captured the state to wreck and plunder it.

“The bottom line is that fixing the financial sector and the budget – the two key issues that the IMF is supposed to address – will have to mean that the interest of some people who have political clout suffer, so there is a lot of potential for conflict,” he said.

Azar gave a similarly bleak outlook. “Given that Lebanon’s economic collapse is a self-inflicted wound due to a dysfunctional political system, it is unlikely that any economic recovery will be sustainable without a fundamental rethinking of the political system,” he said.

The longer it takes, the more opportunities are lost, the bigger the brain drain and the more irreversible the trend becomes.

“When businesses shutter and human capital emigrates, it becomes much more difficult for an economy to recover as the drivers of such recovery would no longer exist,” he said.

EDITOR’S NOTE: Zeina Karam, the news director for Lebanon, Syria and Iraq, has covered the Middle East since 1996. Follow her on Twitter at www.twitter.com/zkaram.