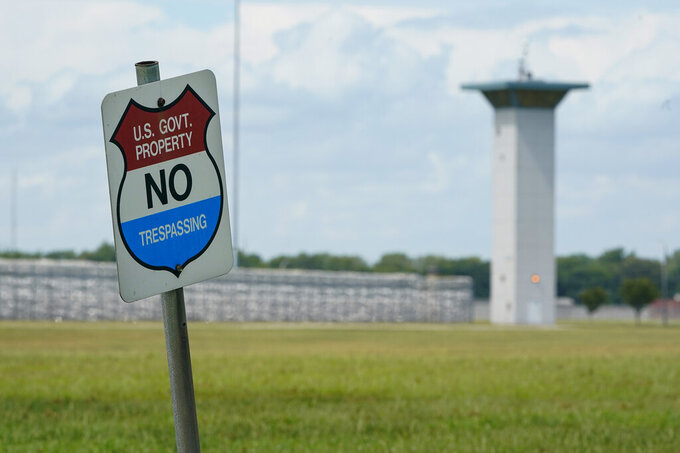 In this Aug. 28, 2020, file photo, a no trespassing sign is displayed outside the federal prison complex in Terre Haute, Ind. A newly released report says the U.S. government for the first time has carried out more civil executions in a year than all states combined as President Donald Trump oversaw a resumption of federal executions after a 17-year pause. (AP Photo/Michael Conroy, File) 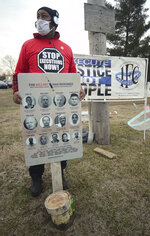 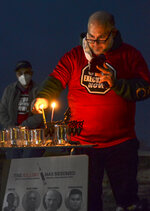 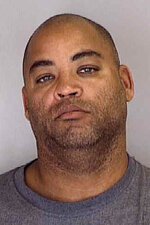 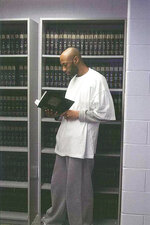 WASHINGTON (AP) — As the Trump administration was nearing the end of an unprecedented string of executions, 70% of death row inmates were sick with COVID-19. Guards were ill. Traveling prisons staff on the execution team had the virus. So did media witnesses, who may have unknowingly infected others when they returned home because they were never told about the spreading cases.

Records obtained by The Associated Press show employees at the Indiana prison complex where the 13 executions were carried out over six months had contact with inmates and other people infected with the coronavirus, but were able to refuse testing and declined to participate in contact tracing efforts and were still permitted to return to their work assignments.

Other staff members, including those brought in to help with executions, also spread tips to their colleagues about how they could avoid quarantines and skirt public health guidance from the federal government and Indiana health officials.

The executions at the end of Donald Trump’s presidency, completed in a short window over a few weeks, likely acted as a superspreader event, according to the records reviewed by AP. It was something health experts warned could happen when the Justice Department insisted on resuming executions during a pandemic.

It’s impossible to know precisely who introduced the infections and how they started to spread, in part because prisons officials didn’t consistently do contact tracing and haven't been fully transparent about the number of cases. But medical experts say it’s likely the executioners and support staff, many of whom traveled from prisons in other states with their own virus outbreaks, triggered or contributed both in the Terre Haute penitentiary and beyond the prison walls.

Of the 47 people on death row, 33 tested positive between Dec. 16 and Dec. 20, becoming infected soon after the executions of Alfred Bourgeois on Dec. 11 and Brandon Bernard on Dec. 10, according to Colorado-based attorney Madeline Cohen, who compiled the names of those who tested positive by reaching out to other federal death row lawyers. Other lawyers, as well as activists in contact with death row inmates, also told AP they were told a large numbers of death row inmates tested positive in mid-December.

In addition, at least a dozen other people, including execution team members, media witnesses and a spiritual adviser, tested positive within the incubation period of the virus, meeting the criteria of a superspreader event, in which one or more individuals trigger an outbreak that spreads to many others outside their circle of acquaintances. The tally could be far higher, but without contact tracing it’s impossible to be sure.

Active inmate cases at the Indiana penitentiary also spiked from just three on Nov. 19 — the day Orlando Cordia Hall was put to death — to 406 on Dec. 29, which was 18 days after Bourgeois’ execution, according to Bureau of Prisons data. The data includes the inmates at the high-security penitentiary, though the Bureau of Prisons has never said whether it included death row inmates in that count.

In all, 726 of the approximately 1,200 inmates at the United States Penitentiary at Terre Haute have tested positive for COVID-19 since the start of the pandemic, according to Bureau of Prisons data. Of them, 692 have recovered.

Advocates and lawyers for the inmates, a Zen Buddhist priest who was a spiritual adviser for one prisoner, and even the families of some of the victims fought to delay the executions until after the pandemic. Their requests were rebuffed repeatedly and their litigation failed. And some got sick.

Witnesses, who were required to wear masks, watched from behind glass in small rooms where it often wasn’t possible to stand six feet apart. They were taken to and from the death-chamber building in vans, where proper social distancing often wasn’t possible. Passengers frequently had to wait in the vans for an hour or more, with windows rolled up and little ventilation, before being permitted to enter the execution-chamber building. And in at least one case, the witnesses were locked inside the execution chamber for more than four hours with little ventilation and no social distancing.

Prison staff told their colleagues they should first get on planes, go back to their homes and then they could take a test, according to two people familiar with the matter. If they were positive, they said, they could just quarantine and wouldn’t be stuck in Terre Haute for two weeks, said the people, who could not publicly discuss the private conversations and spoke to AP on condition of anonymity.

Following Hall’s execution in November, only six members of the execution team opted to get coronavirus tests before they left Terre Haute, the Justice Department said in a court filing. The agency said they all tested negative. But days later, eight members of the team tested positive for the virus. Five of the staff members who had tested positive were brought back to Terre Haute for more executions a few weeks later.

Yusuf Ahmed Nur, the spiritual adviser for Hall, stood just feet away inside the execution chamber when Hall was executed on Nov. 19. He tested positive for the virus days later.

Writing about the experience, Nur said he knew he would be putting himself at risk, but that Hall had asked him to be at his side when he was put to death. He, and Hall's family, felt obliged to be there.

“I could not say no to a man who would soon be killed,” Nur wrote. “That I contracted COVID-19 in the process was collateral damage” of executions during a pandemic.

Later, two journalists tested positive for the virus after witnessing other executions in January, then had contact with activists and their own loved ones, who later tested positive as well. Despite being informed of the diagnoses, the Bureau of Prisons knowingly withheld the information from other media witnesses and decided not to initiate any contact tracing efforts.

By mid-December, prison officials said that both Corey Johnson and Dustin Higgs were sick. They were the last two prisoners to be executed, just days before President Joe Biden took office.

Death row was put on lockdown after their results, inmates told Ashley Kincaid Eve, a lawyer and anti-death penalty activist. But even though they had also tested positive, she said Higgs and Johnson were still moved around the prison — potentially infecting guards accompanying them — so they could use phones and email to speak with their lawyers and families as their execution dates approached. Eve said prisons officials may have worried a court would delay the executions on constitutional ground if that access was denied.

In response to questions from the AP, the Bureau of Prisons said staff members who don’t experience symptoms “are clear to work” and that they have their temperatures taken and are asked about symptoms before reporting for duty. (The AP has previously reported that staff members at other prisons were cleared with normal temperatures even when thermometers showed hypothermic readings.)

The agency said it also conducts contact training in accordance with federal guidance and that “if staff are circumventing this guidance, we are not aware.”

Officials said staff members were required to participate in contact tracing “if they met the criteria for it” and agency officials couldn’t compel employees to be tested.

“We cannot force staff members to take tests, nor does the CDC recommend testing of asymptomatic individuals,” an agency spokesperson said, referring to the Centers for Disease Control and Prevention.

The union for Terre Haute employees declined to comment, saying it did not want to “get into the public fray of this whole issue.”

Elsewhere, union officials have long complained about the spread of the coronavirus through the federal prison system, as well as a lack of personal protective equipment and room to isolate infected inmates. Some of those issues have been alleviated, but containing the virus continues to be a concern at many facilities.

No more executions have yet been scheduled under Biden. The Bureau of Prisons has repeatedly refused to say how many other people have tested positive for the coronavirus after the last several executions. And the agency would not answer questions about the specific reasoning for withholding the information from the public, instead directing the AP to file a public records request.

The Bureau of Prisons said it also “took extensive efforts to mitigate the transmission” of the virus, including limiting the number of media witnesses and adding an extra van for the witnesses to space them out.

It has argued witnesses were informed social distancing may not be possible in the execution chamber and that witnesses and others were required to wear masks and were offered additional protective equipment, like gowns and face shields. The agency also refused to answer questions about whether Director Michael Carvajal or any other senior leaders raised concerns about executing 13 people during a worldwide pandemic that has killed more than 450,000 in the U.S.

Still, it appears their own protocols weren't followed. After a federal judge ordered the Bureau of Prisons to ensure masks were worn during executions in January, the executioner and U.S. marshal in the death chamber removed their masks during one of the executions, appearing to violate the judge’s order. The agency argued they needed to do so to communicate clearly and that they only removed their masks for a short time and disputes that it violated the order.

In a Nov. 24 court filing on the spread of COVID at Terre Haute, Joe Goldenson, a public health expert on the spread of disease behind bars, said hundreds of staff participated in one way or another at each execution, including around 40 people on execution teams and those on 50-person specialized security teams who traveled from other prisons nationwide. He said he had warned earlier that executions were likely to become a superspreader.

Medical and public health experts repeatedly called on the Justice Department to delay executions, arguing the setup at prisons made them especially vulnerable to outbreaks, including because social distancing was impossible and health care substandard.

“These are the type of high-risk superspreader events that the (American Medical Association) and (the Centers for Disease Control and Prevention) have been warning against throughout the pandemic,” James L. Madara, the executive vice president of the AMA, wrote to the Department of Justice on Jan. 11, just before the last three federal executions were carried out.