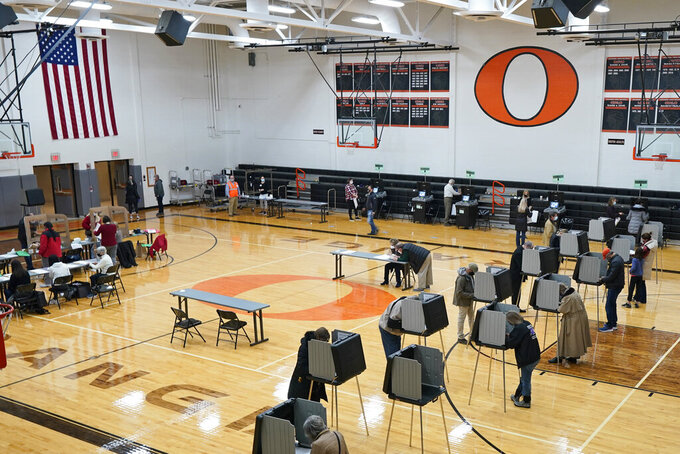 COLUMBUS, Ohio (AP) — After a surge in early in-person and absentee voting, final 2020 ballots have been cast in Ohio.

Enthusiasm among voters is high. A record 3.4 million people took advantage of early and mail-in voting amid the coronavirus pandemic, up from 1.89 million absentee ballots cast in Ohio for the 2016 general election. Poll worker recruitment efforts also hit a record.

Democrat Joe Biden mounted a vigorous challenge to Trump for the state’s 18 electoral votes, but fell short. The former vice president stepped up media spending as early voting began in October, even as Trump’s campaign pulled back on some spending in the state.

Trump easily won Ohio in 2016 with notable support from blue-collar manufacturing and mining communities disenchanted with his opponent, Hillary Clinton, and buoyed by the Republican’s promises that he would bring back jobs to hard-hit communities.

Public health professional Kate Schroder had been seen by Democrats as their best shot for finally flipping one of Ohio’s incumbent-friendly seats in the last election before Census-triggered redistricting.

The 67-year-old Chabot touted a consistent conservative record that usually lined up with Republican President Donald Trump, while Schroder pledged to defend the Affordable Care Act if elected.

The Black woman from Dayton has been an activist on conservation and served as an aide in the U.S. Senate and White House. The 50-year-old Tims was better-funded than most previous Democratic challengers and called climate change a top-priority issue.

Turner, 60 and white, is considered a center-right Republican. He’s made military matters a congressional priority.

Voters picked Balderson, a small business owner from Zanesville, over Alaina Shearer, a former journalist from Delaware who runs a digital media company.

Shearer, 41, campaigned to end the “misinformation war,” but failed to negatively link Balderson to Republican President Donald Trump, who had endorsed and campaigned for him in the past.

Joyce, 63, of Chagrin Falls, has represented Ohio’s 14th Congressional District east of Cleveland since 2013. He won each of his first four races handily, but the district had been trending Democrats’ way and buoying their hopes of capturing the seat.

Joyce, a former Geauga County prosecutor, won support in the politically divided district for being willing to negotiate with, and at times stand up to, Republican President Donald Trump, including on behalf of the health of Lake Erie.

Republican Rep. Warren Davidson was reelected from western Ohio’s 8th district, which he first won in a 2016 special election for the seat being vacated by U.S. House Speaker John Boehner. The Army veteran defeated Democrat Vanessa Enoch in a rematch of 2018, when he won with 67 % of the vote.

Democratic Rep. Marcy Kaptur, the longest-serving woman ever in the U.S House captured her 19th term, defeating Republican Rob Weber in northern Ohio’s 9th District. Kaptur, of the Toledo area, was drawn into a heavily Democratic district dubbed “the Snake by the Lake” during GOP-dominated redistricting that took effect in 2012.

Democratic Rep. Marcia Fudge was elected to her sixth term for northeast Ohio’s 11th District, defeating Republican Laverne Gore. Fudge was drawn into heavily Democratic district in GOP-dominated redistricting that took effect in the 2012 elections and has been getting 80% of the vote every two years.

Democratic Rep. Tim Ryan, who made a short-lived run for the Democratic presidential nomination, was elected to his fifth term from northeast Ohio’s 13th district. He defeated Republican Christina Hagan in the working-class area he had consistently won with more than 60% of the vote.

Republicans retained their supermajorities in both chambers of Ohio’s Legislature on Tuesday despite a federal bribery scandal involving the former speaker, Larry Householder.

The race in the rural district of disgraced former Ohio House Speaker Larry Householder includes four write-in candidates attempting to unseat the once-powerful politician, who refused to step aside from his reelection bid despite facing charges in a $60 million bribery scheme.

The four challengers — of varied parties and backgrounds — are unified in their attacks on Householder’s questionable ethics and his role in passing a nuclear bailout bill at the center of the scandal that now faces renewed scrutiny at the statehouse. Still, a Householder victory appears likely in District 72, given his strong ties in his native Perry County and an endorsement by the local Republican Party.

He is the only candidate listed on the ballot, having fielded no Democratic challenger. The heavily Republican district also covers Coshocton County and Licking County in east-central Ohio.