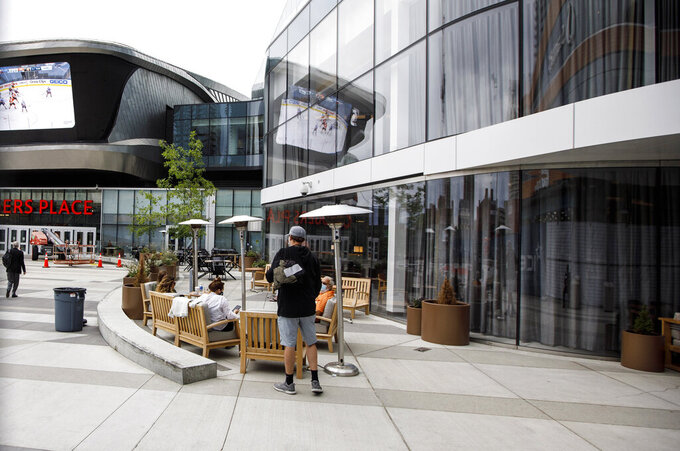 EDMONTON, Alberta (AP) — The NHL is allowing some family members to join the Edmonton playoff bubble but is waiting on the Canadian government on the possibility of adding more.

Deputy commissioner Bill Daly told The Associated Press on Saturday that Canadian family members of players, coaches and staff on the teams that reached the conference finals are free to enter the bubble immediately as long as they adhere to quarantine regulations spelled out before the start of the playoffs. Daly said the league hasn't yet heard back from the government on additional exemptions for family members who are not Canadian citizens.

Family members must quarantine upon arrival until they test negative for the coronavirus over four consecutive days and after that must agree to daily health monitoring, including testing, temperature checks, symptom screening and contact tracing. Daly said any Canadian citizens re-entering the country are subject to the federally mandated 14-day quarantine.

The NHL has reported zero positive coronavirus results since teams entered the Toronto and Edmonton bubbles July 26, plus the week before that while training camps were going on in home cities. A total of 2,814 tests were administered last week alone.

Players, coaches and staff have been quarantined away from family for six weeks now. The NHL had planned on welcoming family members to the bubble when it was down to the final four teams for the conference final round that starts Sunday.

The league, NHL Players' Association and the federal government and Alberta provincial officials have been in discussions on the subject for several weeks.

One player, Vegas Golden Knights defenseman Nick Holden, said his family is not yet joining the bubble. They're currently in the United States.

Vegas and the Dallas Stars open the West final Sunday night. The Tampa Bay Lightning will face either the New York Islanders or the Philadelphia Flyers in Game 1 of the East final Monday night. All games through the Stanley Cup Final will be played in the quarantined Edmonton bubble without fans.