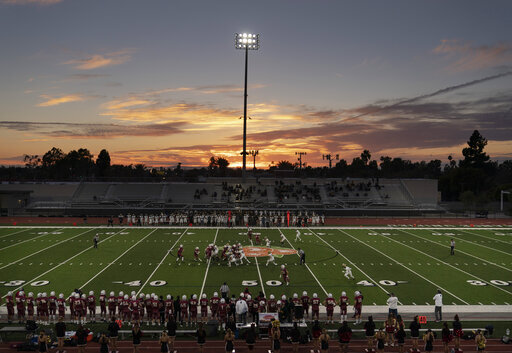 The sun sets behind the stadium during a high school football game between El Modena and El Dorado in Orange, Calif., Friday, March 19, 2021. The team recently played its first football game in a year as more California counties ease coronavirus restrictions and life in the nation’s most populous state inches back to normalcy. (AP Photo/Jae C. Hong)

ORANGE, Calif. (AP) — Anna Smith arrived at Fred Kelly Stadium in Southern California on a recent Friday evening with a cardboard cutout of her brother the size of a semitruck tire. Moments later, more spectators gathered on the school stadium’s bleachers, some wearing face masks with their favorite players’ jersey numbers embroidered on them.

For El Modena High School, Friday night football is back — albeit now in the spring instead of the normal time in the fall.

The team recently played its second football game of the season as more California counties ease coronavirus restrictions and life in the nation’s most populous state inches back to normalcy.

Across the U.S., fits and starts have bedeviled youth sports for the past year since the pandemic first closed schools and altered how parents, coaches and officials approach the extra-curricular activities so fundamental to students’ lives. Rules surrounding youth sports have varied from state to state — and sport — keeping athletes and coaches often at the edge of their seats for months.

In California, players on football teams that have returned to play must follow restrictions that public health experts say are needed to keep youth athletes safe as overall coronavirus rates in the state fall.

During that second game day, on March 19, coaches and parents at El Modena said they were relieved, and players were overjoyed to be back on the field. Michael Casares, a school guard, screamed every time the team gained yards. Coaches got loud too — though sometimes to remind kids to spread out along the sidelines.

“This last year has been different obviously with the pandemic. It’s been up and down for the kids. We tried to keep things as normal as possible,” said head coach Matt Mitchell.

This season is not without changes to the normal football routines. The school gets to play six games — four fewer than the pre-pandemic season. Gym equipment has been moved to an outdoor racquetball court. Players can’t enter the locker room. And no team meals before the game, either.

With no access to indoor facilities, during that recent game athletes rested during halftime on the concrete floor. But tight end Tom Leonard said he and his teammates didn’t mind the inconvenience.

“A lot of us didn’t think that we would get here, so it feels awesome just to have a chance to play, even only six games,” said Leonard.