AP Photos: 'I got stories.' A life of troubles and love 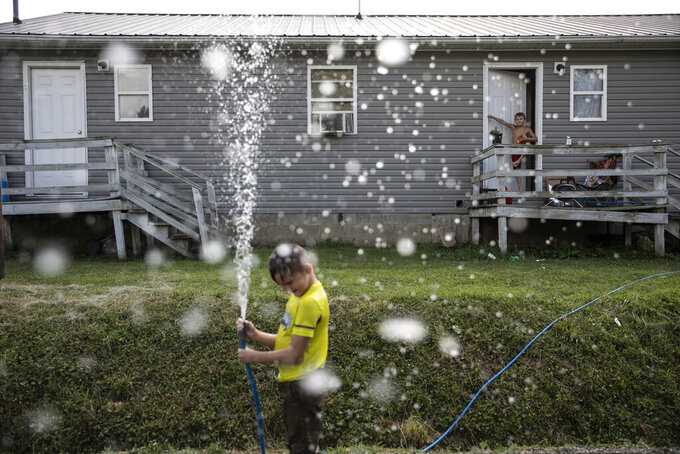 BIDWELL, Ohio (AP) — “I got stories,” Tasha Lamm said when we first met her, in a little town in Appalachian Ohio. And she did.

Her problems might seem overwhelming: poverty, unemployment, a stint of homelessness, an abusive mother, a boyfriend who died of a heroin overdose. The many other things that she hinted at, but never revealed.

But Lamm is far more than the sum of her hardships. She’s a petite, talkative woman who has faced so much in her 30 years. It's as if she was almost unbreakable, with all that history feeding a palpable fighting spirit. She knew what was holding her back in life, and she knew what she needed to do to stay afloat and — hopefully, someday — escape from her tiny, troubled world.

The three of us on The Associated Press’ road trip across America met Lamm as we tried to make sense of a country upended by the coronavirus pandemic, unemployment, protests over racial justice and the brutal politics of the upcoming elections.

This story is part of the Looking For America project, produced with the support of the Pulitzer Center on Crisis Reporting.

Her home is small, cozy, and neat, carefully decorated with things that mean something to her and her girlfriend, Alicia Mullins. Her two young boys are rambunctious and happy. On the summer day we visited, they were playing with a hose in the backyard. She doesn’t let them wander from the house. After what she’s been through, she doesn’t trust the world out there.

At dinnertime, she and Alicia make the meal together, often with donated food but also with care.

It's too easy to stereotype people like Tasha. She’s jobless, lives in subsidized housing, and has a kitchen cabinet full of donated food.

But she’s also smart, strong and organized. She cares deeply for her kids and her girlfriend. She’s taken the little she has and made a life out of it, even if she’s desperate to find a way out of here. She dreams of going to New York City.

In the end, it wasn’t the struggles of the little family that stood out most in that little house. It was love.