AP PHOTOS: From memorial to protest, the power of prayer 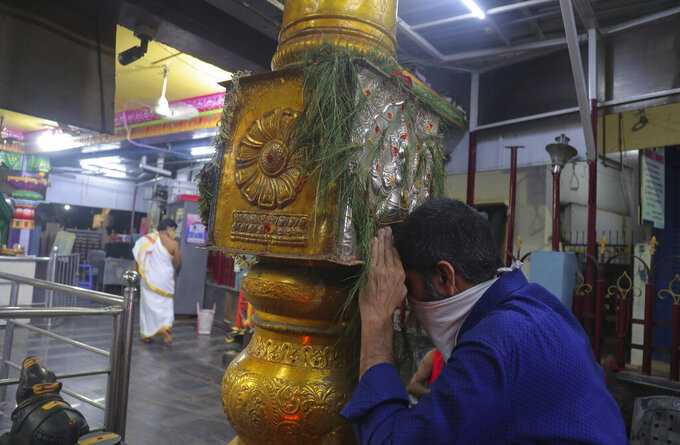 A man wearing a scarf as a precaution against the coronavirus offers prayers at Shakti Ganesh temple in Hyderabad, India, Tuesday, Sept. 22, 2020. (AP Photo/Mahesh Kumar A.)

The unidentified man cast a solitary silhouette in the window of his home in Srinagar, the capital of disputed, Indian-controlled Kashmir, as he offered evening prayers.

Half a world away, Chicago Bears wide receiver Anthony Miller knelt on the field and pressed a fist solemnly to his bowed forehead after a game against the Atlanta Falcons.

And on the Lebanese coast, Afaf Adulhamid, crossed her arms and cried as she prayed for the safe return of her 27-year-old son, who went missing at sea while trying to cross on a boat to Cyprus with other migrants.

Associated Press photographers captured moments like these this past month showing the power that prayer holds for billions of faithful around the globe — and the diversity of ways in which it is manifested.

Some prayed in remembrance, such as the nuns who surrounded the tomb of Saint Theresa on the anniversary of her death in Kolkata, India, or at the Sept. 11 monument in New York, inscribed with the names of people killed in the 2001 terror attacks.

Others did so amid protest, like 71-year-old Dionisia Jorge of the Israelite Church of Peru, who knelt arms-wide with a rainbow-patterned Inca flag outside Congress, where some lawmakers were calling for the dismissal of President Martín Vizcarra over a corruption probe.

Still others marked festivals and holidays; at the Western Wall in Jerusalem’s old city, an ultra-Orthodox man and an armed Israeli soldier both wearing surgical masks prayed on opposite sides of a white barrier ahead of Yom Kippur, the holiest day in the Jewish year.

They were far from the only ones practicing social distancing amid the ongoing pandemic. In Havana, devout Cubans stood at a safe distance from each other in the street while listening to a Roman Catholic Mass broadcast by radio honoring the Virgin of Charity of Cobre, their country’s patron, on her feast day.

But in Bucharest, Romania, a man held a crucifix aloft as he shouted anti-mask slogans against restrictions designed to curb the spread of the coronavirus such as social distancing mandates and obligatory face coverings in schools.

Following the controversial conversion of Istanbul’s Byzantine-era landmark Hagia Sophia back into a mosque, worshippers held the first Muslim prayers inside in 86 years, its needlelike minarets framing a luminous, rising full moon.

These and more are among the AP’s top faith-related images published in September.