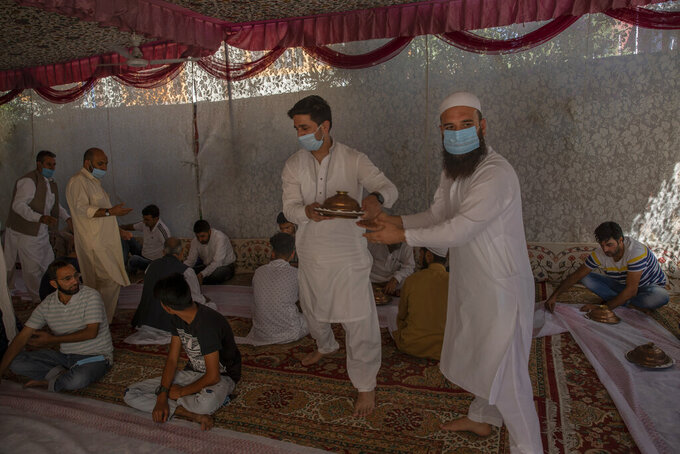 Kashmiri men carry rice plates before serving them to guests during a wedding ceremony on the outskirts of Srinagar, Indian controlled Kashmir, Friday, Sept. 18, 2020. The coronavirus pandemic has changed the way people celebrate weddings in Kashmir. The traditional week-long feasting , elaborate rituals and huge gatherings have given way to muted ceremonies with a limited number of close relatives attending. With restrictions in place and many weddings cancelled, the traditional wedding chefs have little or no work. The virus has drastically impacted the life and businesses in the region. (AP Photo/ Dar Yasin) 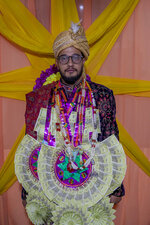 SRINAGAR, India (AP) — In Indian-controlled Kashmir, the coronavirus pandemic within months has changed an elaborate and lavish marriage tradition that had remained virtually unaltered for centuries.

Three days of feasting, elaborate rituals and huge gatherings have been replaced by muted ceremonies attended by a limited number of close relatives and neighbors. With restrictions in place and many weddings canceled, the traditional master chefs have little or no work.

Months before the pandemic, Haseeb Mushtaq drew up a guest list of hundreds and grand plans for celebrating his wedding in May.

But then the pandemic blocked him from traveling home for his wedding from Dubai, where he has an engineering job. When he finally arrived home for his postponed wedding in September, he could only invite about a hundred people, mostly from his extended family and close friends.

“Marriage is a once-in-a-lifetime affair and I feel really bad that we couldn’t invite most of our relatives, friends and neighbors,” Haseeb said at the ceremony. “The hardest part was deciding whom to invite and whom not.”

Still, Haseeb considers himself lucky. One of his friends working in Saudi Arabia was unable to travel home for his own marriage and had to delay it until next year.

As Kashmir's wedding season sets in, normally lavish celebrations have been drastically downsized.

Kashmiris normally hold elaborate marriage feasts, with meals cooked over firewood through the night by chiefs called “wazas.” Hundreds of guests are invited for lunch and dinner and served up to 30-course meals. The feast is called “wazwan.”

The peculiarity of a wazwan is that every part of a lamb, except the hide, head and hooves, is used for making different dishes.

Groups of four diners squat around large copper platters heaped with rice and various mutton and chicken dishes. More dishes are served by the chefs, dressed in crisp white baggy trousers and tunics.

The wazwan tradition is so entrenched across all classes in Kashmir that awareness of the wastage of high-quality food has not produced any restraint. Numerous attempts by social groups and the government have failed to instill any significant austerity in the food.

However, the pandemic has largely achieved that in a matter of months.

Wedding ceremonies require prior permission from the authorities, and guest limits and social distancing are mandatory. Most feasts are restricted to 10 dishes and the chefs are advised to wear protective suits and gloves.

Health officials say 63,990 coronavirus cases have been reported in the region through Sept. 20, including 1,001 deaths.

For master chef Ghulam Qadir and his team of over three dozen cooks, the pandemic has caused his earnings to be badly hit for the second straight year. Last year, India suddenly scrapped disputed Kashmir’s statehood in August and imposed an unprecedented security clampdown, creating economic disaster and the cancellation of most wedding celebrations.

Qadir said the pandemic has posed another challenge to the cooks — keeping themselves and guests safe while cooking and serving the marriage feasts.

“It is sad to see our hundreds of years of tradition changing in few months due to the pandemic. We used to eat from one big platter and now we have a small plate for each guest,” Bashir Ahmed said at a relative’s marriage party. “It looks like a small change, but this kind of change saddens me.”