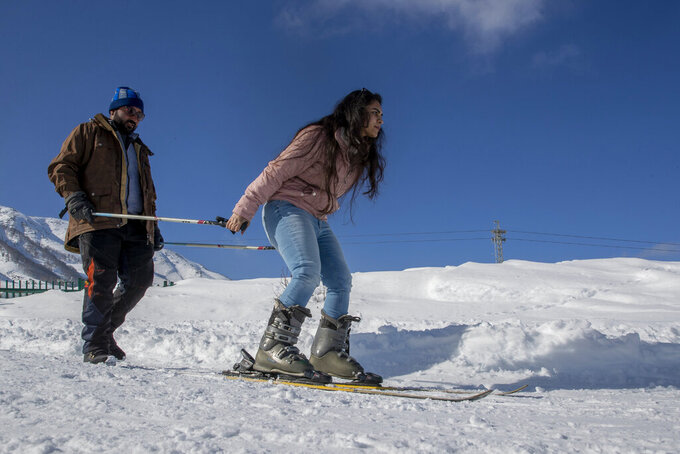 Ramasha Rizwan, an Indian tourist is helped by a Kashmiri ski instructor to ski down a slop in Afarwat, Gulmarg, northwest of Srinagar, Indian controlled Kashmir, Sunday, Jan. 10, 2021. Rizwan, said Kashmir is beautiful, it is mesmerizing, and the views are spectacular. I snapped my friends, and they were like, oh are you abroad? How do you go there? I said no, it's Kashmir. And I am really enjoying myself right now"(AP Photo/ Dar Yasin)

With its blanket of white, the idyllic hill station is seeing tourists again fill its hotels and ski, sledge and trek its Himalayan landscape.

The heavy influx of tourists is a dramatic change for the tourism industry in disputed Kashmir, which faced the double whammy of the coronavirus pandemic and harsh curbs on civil rights India imposed in the region in August 2019.

Gulmarg was developed as a resort by the British nearly a century ago, and the region's eternal appeal with foreign visitors has made it a year-round destination. In summer, tourists meander through meadows, ravines and evergreen-forested valleys. In winter, they snowboard and trek on Asia’s largest ski terrain.

The 2019 end of Kashmir's semi-autonomous status and an unprecedented security clampdown morphed Gulmarg into a ghost town, an illustration of the region's economic ruin. The Kashmir Chamber of Commerce and Industries pegged the economic losses in the region at $5.3 billion and about half a million jobs lost till August last year.

But worse was yet to come. Last March, Indian authorities enforced a harsh lockdown to combat the coronavirus, all but halting foreign travel.

The pandemic, however, made Indians reconsider their own vacations. Once snow coated the hill station last month, they decided to travel to Gulmarg when otherwise they might have gone abroad. And for the first time in 15 months, hotels are sold out till the end of February.

“Nobody is worried about the virus. Everybody is feeling free,” said Meenu Nanda, 38, an Indian tourist.