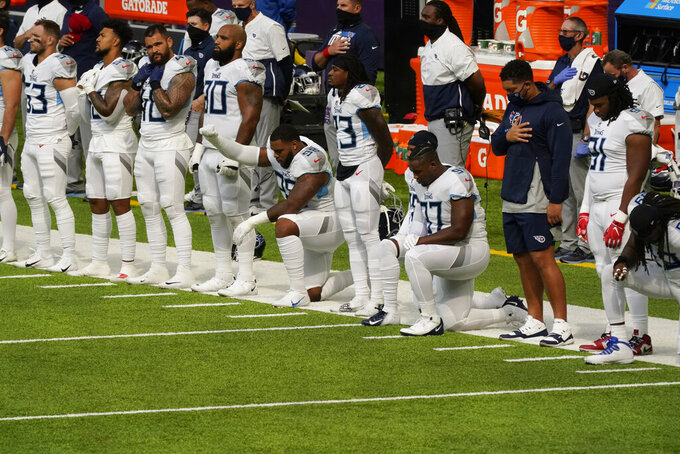 FILE - In this Sept. 27, 2020, file photo, members of the Tennessee Titans take part in the national anthem before an NFL football game against the Minnesota Vikings, in Minneapolis. Tennessee will not be returning to the team's facility Wednesday, Oct. 7, 2020, after two more players tested positive in the NFL's first COVID-19 outbreak, a person familiar with the situation told The Associated Press. The Titans had no positive tests Monday or Tuesday for the first time after six consecutive days of positive results. A third straight day was necessary for the team to be allowed back in its headquarters.(AP Photo/Jim Mone)

NASHVILLE, Tenn. (AP) — The Bills-Titans game has been moved from Sunday to Tuesday night as long as Tennessee has no more positive tests for COVID-19 in the interim, a person with direct knowledge of the switch tells The Associated Press.

The NFL also is rescheduling Sunday’s Broncos-Patriots game from Sunday to Monday night after New England had a smaller outbreak of COVID-19, the person said Thursday, speaking on condition of anonymity because the league and teams had not officially announced the changes.

Three games now have been postponed due to the pandemic: Pittsburgh at Tennessee in Week 3 was moved to Oct. 25.

Buffalo is scheduled to host Kansas City next Thursday, and that game will be rescheduled.

The Titans' outbreak increased to 23 Thursday with tight end MyCole Pruitt and a defensive back from the practice squad put on the reserve/COVID-19 list Thursday afternoon. The Titans' facility remains closed with the team still prohibited from any in-person activities.

Tennessee (3-0) has had 21 positive tests returned since Sept. 29, though now 13 players are on the reserve/COVID-19 list, including four starters and a long snapper.