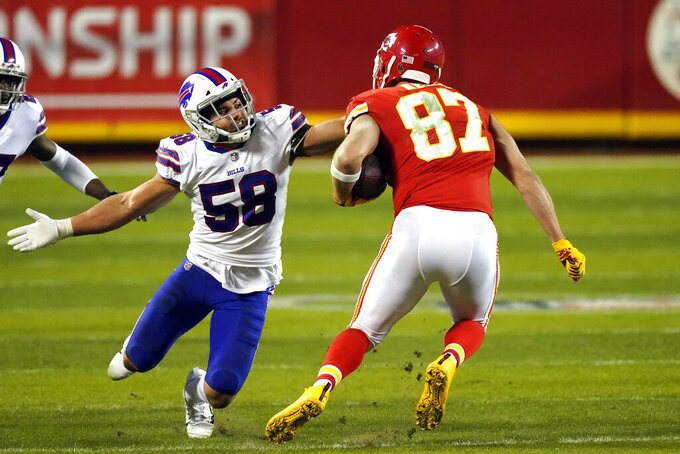 FILE - Buffalo Bills linebacker Matt Milano (58) tackles Kansas City Chiefs tight end Travis Kelce (87) during the second half of the AFC championship NFL football game in Kansas City, Mo., in this Sunday, Jan. 24, 2021, file photo. The Buffalo Bills' salary-cap constraints have led starting linebacker Matt Milano to decide he will test free agency next month, a person with direct knowledge of the situation told The Associated Press on Friday, Feb. 19, 2021. The person spoke to The AP on the condition of anonymity because the discussions between the player and team have been private. (AP Photo/Charlie Riedel, File)

BUFFALO, N.Y. (AP) — Starting linebacker Matt Milano will explore free agency next month because of Buffalo's salary-cap constraints, a person with direct knowledge of the situation told The Associated Press on Friday.

Milano has been a starter since his rookie season in 2017, and his decision is based on the Bills not being in position to match the offers he is expecting to receive once the NFL’s signing period opens on March 17. His decision was confirmed by the person who spoke to the AP on the condition of anonymity because the discussions between the player and team have been private.

Milano is projected to be among the top linebackers available on the market, and the Bills are currently estimated to have only $3 million available under a salary cap that is dropping due to revenue losses incurred during the coronavirus pandemic.

The league this week informed teams the cap minimum will be $180 million, which is down from $198 million from last season.

The Bills are already expected to create more space by cutting or restructuring existing salaries in order to address other more affordable needs, such as offensive line. The team also needs to free future salary cap space to re-sign quarterback Josh Allen, who is coming off a breakout season and entering the final year of his rookie contract.

“Listen, we want to keep good players. Matt’s a good player, so we’d love to keep him here,” Beane said. “But, again, he’s earned this right and we’ll just have to see how it plays out.”

Buffalo is coming off a 13-3 finish in which it won its first AFC East Division title in 25 years, and reached the conference championship for the first time since 1994.

The 26-year-old Milano was selected by Buffalo in the fifth-round of the 2017 draft and developed into a key contributor when healthy. His versatility at the outside linebacker position to defend against the run and pass made him a valuable three-down player in Buffalo’s defensive system.

An assortment of injuries limited him to appearing in just 11 regular-season games and six starts this past year in which Milano still posted career-bests with 3 1/2 sacks and nine quarterback pressures. Including playoffs, the Bills had a 12-1 record with Milano in the lineup last season.

A.J. Klein, who has two years left on his contract, would be a candidate to take over the starting job after filling in for Milano this season.