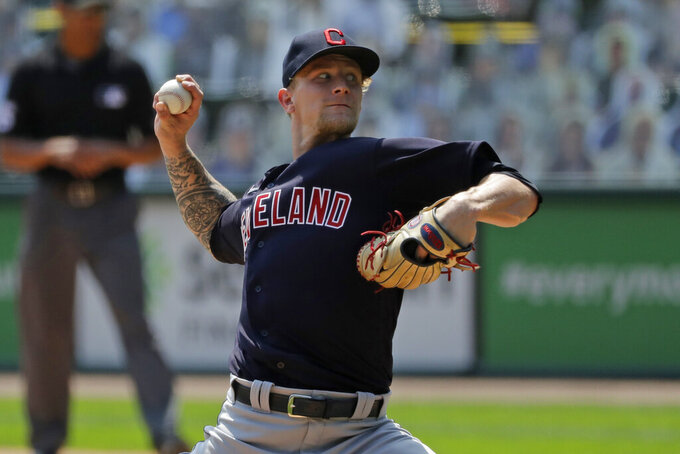 Clevinger flew home with his teammates Sunday despite knowing he had broken the club's COVID-19 protocols by going out in Chicago with right-hander Zach Plesac during Cleveland's weekend trip, according to a person familiar with the situation.

Clevinger did not admit that he had violated the rules during a team meeting Sunday to discuss Plesac being sent home by the team, said the person who spoke Monday night to The Associated Press on condition of anonymity because of the sensitivity of the situation.

The Indians said Clevinger, who can be outspokpen and outlandish, will be quarantined and tested and will not make his scheduled start Tuesday night at home against the Cubs. It's not yet known if Clevinger and Pleasac have been tested since their violations were reported.

They will have to twice test negative in 72 hours before they'll be allowed to rejoin in any team activities.

The Indians arranged a car service to take Plesac back to Cleveland so he wouldn’t be around his teammates in case he had contracted the coronavirus while out with friends on Saturday after he getting his first win this season with six strong innings against the White Sox.

Clevinger not only didn't acknowledge his misstep to the club, but he then took the team flight despite knowing he was putting his teammates and staff at risk. One of those teammates is fellow starter Carlos Carrasco, who could have a compromised immune system after being treated for leukemia last year.

Clevinger and Plesac are being counted on as part of a strong Cleveland pitching staff that has carried the club through 17 games.

The Indians — and other Major League Baseball teams — have established codes of conduct in order to mitigate possible spread of the highly contagious disease. The St. Louis Cardinals and Miami Marlins have had numerous games postponed due to virus outbreaks among their players and staff members.

Last month, Clevinger said he was in favor of the team having guidelines to keep players in check.

“This isn’t going to be a ‘run to daddy’ kind of thing. We’re going to handle it in-house. This is a player discipline thing. Keep the coaches, front office kind of out of it,” he said on July 30. “It puts a little extra accountability, kind of. Just having that trust in your teammates is a big thing. It’s a big thing on the field. If you feel your teammate doesn’t trust you off the field how are you going to feel like he trusts you when you get between the lines?”

Clevinger and Plesac could face additional discipline from the Indians, who have been proactive during baseball's re-start. They quarantined slugger Franmil Reyes after learning he didn't wear a mask or practice social distancing while attending a July 4 party.

Team president Chris Antonetti and manager Terry Francona, who has been away from the team for the past eight games while dealing with a gastrointestinal issue, are expected to address Clevinger's situation Tuesday.

The 25-year-old Plesac issued an apology on Sunday night to the organization and fans.

“I realize I made a poor choice to leave the hotel, which broke protocols and could have endangered other people," Plesac said. "I understand that in these times of uncertainty, I need to be more vigilant and responsible and I am determined to earn my teammates’ forgiveness and get back to work.”

Adam Plutko will start in place of Clevinger, a hard-throwing, free-spirited right-hander who is 1-1 with a 3.24 ERA.

On Friday, the 29-year-old Clevinger posted a song lyric on Twitter by Pearl Jam frontman Eddie Vedder that seems to underscore his defiant nature.

“I knew all the rules, but the rules did not know me,” Clevinger wrote.