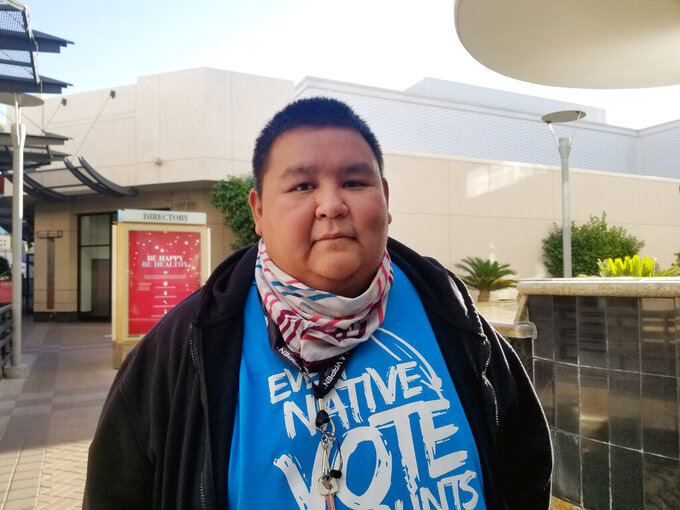 Joshua Gonnie pauses for a photo Thursday, Oct. 29, 2020 in Phoenix. The 35-year-old registered Democrat voted for Donald Trump in 2016 partly because he was upset that Bernie Sanders wasn't the nominee. Also, as a Navajo man who grew up only seeing men lead tribal communities, Gonnie couldn't picture Hillary Clinton as president. This time, he voted for Joe Biden. He thinks the former vice-president would better serve Native Americans. (AP Photo/Terry Tang)

Voters in Arizona made their pick for president while holding negative views about the country’s direction and the economy, according to an expansive AP survey of the American electorate.

The race between President Donald Trump and Democratic rival Joe Biden concluded Tuesday as the nation remains in the throes of a global public health crisis and mired in the economic downturn it brought on. AP VoteCast found that 39% of Arizona voters said the U.S. is on the right track, and 61% of voters said it is headed in the wrong direction.

Voters were more negative than positive in their assessments of the nation’s economy. Overall, 44% described economic conditions in the U.S. as excellent or good, and 56% called them not so good or poor.

Here’s a snapshot of who voted and what matters to them, based on preliminary results from AP VoteCast, a nationwide survey of about 132,000 voters and nonvoters -- including 3,772 voters and 828 nonvoters in Arizona -- conducted for The Associated Press by NORC at the University of Chicago.

In the race for president, Biden led Trump among voters under 45, while older voters were split between Trump and Biden.

Latino voters were more likely to prefer Biden, but white voters were divided between Trump and Biden.

College-educated voters were more likely to back Biden, while voters without a college degree were split between Biden and Trump.

In the special election for Senate, retired astronaut Mark Kelly, a Democrat, led Republican Sen. Martha McSally among voters under 45. Kelly and McSally were about even among older voters.

Latino voters were more likely to back Kelly over McSally, while Kelly and McSally were roughly even among white voters.

Voters in small towns and rural areas modestly preferred McSally over Kelly. Kelly had an advantage among both voters in cities and suburban voters.

The Senate race ranks among the most closely watched in the nation. Kelly, a first-time candidate, consistently led the Senate race in polling and fundraising.

McSally ran for Arizona’s other Senate seat in 2018 but lost to Democrat Kyrsten Sinema, and Gov. Doug Ducey later appointed her to the seat held by McCain until his death of an aggressive brain cancer.

Trump voter Michaela Lane of Phoenix said she was happy the president allowed state governors to handle the pandemic.

“Some did great and some didn’t. I’m happy to be in Arizona as compared to New York or California right now,” Lane said. “The most important issue facing the country as a whole is liberty at large — infringing on people’s freedom, government overrule, government overreach, chaos in a lot of issues currently going on, and just giving people back their rights.”

The pandemic has spread through the U.S. for roughly eight months, killing more than 230,000 Americans.

The pandemic was top of mind for many voters in Arizona. Some 40% said it is the most important issue facing the country today. Voters also considered the economy a major issue, with 29% saying it ranked at the top.

Kenneth Long of Phoenix said he voted for Trump because he believes the president can restore the economy to a robust state.

“That’s why I’m comfortable with the vote I made,” Long said. "I genuinely know we’re probably going to be on track to get there again.”

Joshua Gonnie of Phoenix voted for Trump in 2016 but switched to Biden this year. Gonnie wasn't pleased about the timing of pandemic economic relief he received.

“I got my stimulus check way late, and I’m the one who voted for Trump," Gonnie said. “That made me mad.”

“I feel like Trump helped the rich more,” he said. "Hopefully Biden can reach out to lower-class people like me. I don’t make over $100,000, you know?”

Biden singled out the state for expanding the presidential battleground map, owing to demographic changes, new residents and a noticeable realignment away from Republicans among key suburban voters. It’s a stark transformation for a state that produced pathbreaking Republicans from Barry Goldwater to John McCain to Sandra Day O’Connor.

Arizona is considered a swing state whose 11 Electoral College votes could tip the scales in the presidential election.

In Arizona, 62% of nonvoters were younger than 45 and 77% did not have a college degree.

AP VoteCast is a survey of the American electorate conducted by NORC at the University of Chicago for Fox News, NPR, PBS NewsHour, Univision News, USA Today Network, The Wall Street Journal and The Associated Press. The survey of 3,547 voters in Arizona was conducted for eight days, concluding as polls closed. Interviews were conducted in English and Spanish. The survey combines a random sample of registered voters drawn from the state voter file and self-identified registered voters selected from nonprobability online panels. The margin of sampling error for voters is estimated to be plus or minus 2.1 percentage points. Find more details about AP VoteCast’s methodology at https://ap.org/votecast.