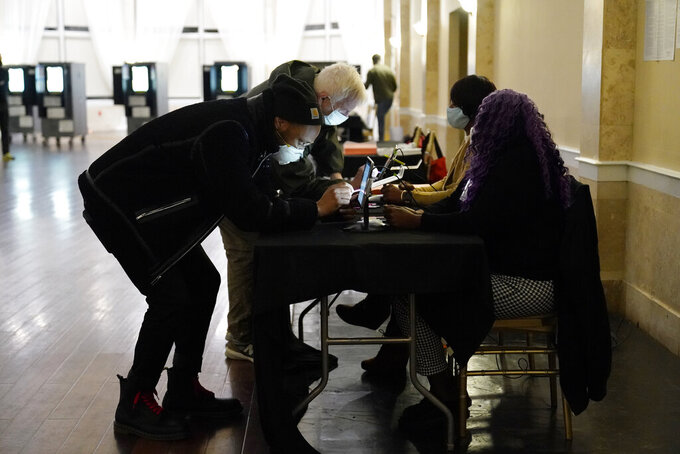 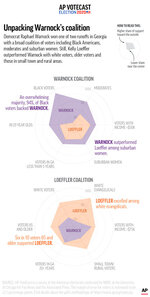 Black voters cast 32% of the ballots, a slight increase from the presidential election two months ago, according to AP VoteCast. As in November, almost all — 94% — of those votes went for Democrats. Black voters accounted for about 60% of ballots for Democrats, according to the survey of 3,700 voters in the runoff elections.

Voters under the age of 45 also broke for Democrats, as did suburban voters, women, low-income voters and voters who have lived in the state fewer than five years, a group that cast about 60% of their votes for Democrats.

The coalition closely mirrored the one that handed Georgia’s Electoral College votes to President-elect Joe Biden, the first Democrat to win the state since 1992. In defeating Republicans Kelly Loeffler and David Perdue, Democrats will have half the seats in the chamber, leaving Vice President-elect Kamala Harris to serve as tiebreaker.

The high-stakes runoffs drew hundreds of millions of dollars, media attention and a massive organizing effort. The result was a game of inches — both Republicans and Democrats largely held their voters from November, the survey showed, but Democrats did just slightly better in pushing their voters to the polls.

The GOP candidates won an overwhelming majority — almost three-quarters — of white voters and 60% of voters 65 and older. They also captured majorities from voters earning $75,000 or more. That coalition in the recent past likely would have been enough to keep Perdue and Loeffler in the Senate. But shifting demographics and an energized Democratic Party have turned the tables.

President Donald Trump responded to his November loss with a series of conspiracy-laden tirades that cast a shadow on Tuesday’s Senate elections as Republicans have become increasingly distrustful of the electoral process. The survey found Trump's grievances had gained traction within his party.

About three-quarters of voters who backed Republican candidates in Georgia's Senate runoffs say Biden was not legitimately elected two months ago. And, despite the courts, state officials and the Justice Department finding no evidence of widespread voter fraud, roughly 9 in 10 of the Republicans' backers said they were not very confident that votes in November's presidential contest were accurately counted. Half said they have no confidence at all in the vote count. That's roughly five times as many Republicans who said in November they had no confidence that votes would be counted accurately.

The poll points to a partisan divergence that has only worsened since November and suggests Biden may find it difficult to stitch the nation back together as it battles a pandemic and weakened economy. Roughly half of Perdue and Loeffler voters said they will not support Biden, while about as many say they will at least give him a chance.

Nearly two-thirds of all Georgia voters were pessimistic about the nation’s future. While Democrats’ attitudes have only improved somewhat, Republican views of the country have changed dramatically. In November, about three-quarters of Republican voters in Georgia considered the nation on the right track. Now, about 7 in 10 say the country is headed on the wrong track.

Georgia voters were keenly aware of what was at stake. About 6 in 10 said that control of the Senate was the single most important factor in their choice. After weeks of the GOP candidates warning about the impact of Democratic control of the White House, House and Senate, Republican backers were more likely than Democratic supporters to prioritize holding a Senate majority.

Democrats spent much of the campaign pounding Republicans over stalled negotiations of a $900 billion stimulus package for an economy still reeling from the coronavirus pandemic. Even after the package passed, Ossoff and Warnock, as well as Loeffler and Perdue, backed additional aid money.

That position was in line with Georgia voters. A wide majority — 7 in 10 — said Congress is doing too little to help the financial situations of individual Americans and small businesses in response to the pandemic. That view was held by majorities of Democratic and Republican voters alike, though roughly a quarter of Loeffler and Perdue voters said Congress was providing the right amount of assistance.

About 40% of Georgia voters earn less than $50,000 — and roughly 6 in 10 of that group supported Ossoff, a slight increase in his support from this group in November.

The candidates' experience was a source of debate in both campaigns. Neither Ossoff, a 33-year-old media executive, nor Warnock, 51, the senior pastor at Ebenezer Baptist Church, a congregation once led by civil rights icon Martin Luther King Jr., has held public office.

Loeffler was appointed to the Senate in 2019 after a career in the financial sector, having accrued a family fortune estimated to be more than $500 million in large part from her husband's position as head of the company that owns the New York Stock Exchange and other financial markets.

Voters are closely split over whether Ossoff, Warnock or Loeffler each have the “right experience to serve effectively as senator,” while about two-thirds say Perdue does. Perdue was elected to the Senate in 2014, but the term of the former CEO of Dollar General expired Sunday.

Both Republican candidates have faced scrutiny for extensive stock trades while in office. A majority of voters, 55%, say they are very or somewhat concerned about allegations that Perdue and Loeffler engaged in insider stock trading. That includes about 2 in 10 of their own backers.

Democrats, meanwhile, were branded as “radicals” and “socialist” by their GOP rivals. The poll found voters were slightly more likely to view the Democratic candidates as being “too extreme” in their political views. About half say Warnock and Ossoff are, compared with about 4 in 10 for Perdue and Loeffler.

AP VoteCast is a survey of the American electorate conducted by NORC at the University of Chicago for Fox News and The Associated Press. The survey of 3,792 voters in Georgia was conducted for eight days, concluding as polls closed. Interviews were conducted in English. The survey combines a random sample of registered voters drawn from the state voter file and self-identified registered voters selected from nonprobability online panels. The margin of sampling error for voters is estimated to be plus or minus 2.1 percentage points. Find more details about AP VoteCast’s methodology at https://www.ap.org/votecast.