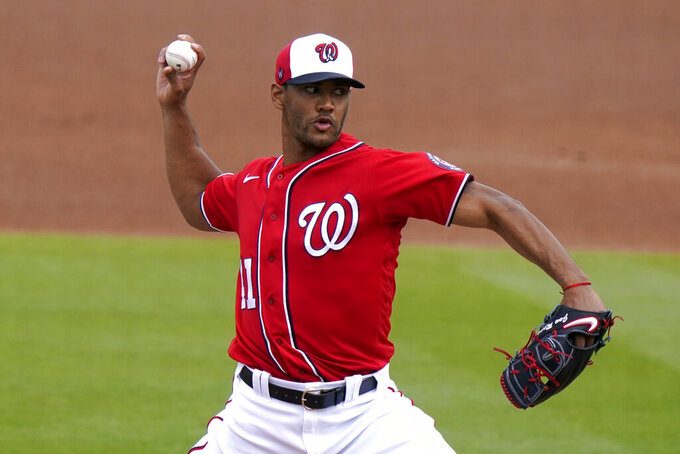 Kohei Arihara finished what he started this time.

The Texas Rangers newcomer bounced back from a shaky spring training debut, pitching three solid innings Monday in a 9-0, seven-inning loss to the Chicago Cubs.

Arihara retired his final seven batters, setting down Ian Happ, Anthony Rizzo and Kris Bryant to end his outing. Overall, he allowed a run on two singles without a strikeout or walk.

Signed to a $6.2 million, two-year contract after six seasons in Japan, the 28-year-old right-hander allowed a three-run homer in the first inning of his initial spring start against the Chicago White Sox last week. He worked two innings, both of them cut short before the third out because of high pitch counts.

After his three innings against the Cubs, Arihara went to the bullpen to throw additional pitches to get him up to 50 for the day.

All in all, a bit different than the adrenaline and excitement of his first game against big league hitters last week. Arihara said he was just thinking about doing his job of throwing strikes and getting out batters.

“This game, I was able to go into the game prepared and calm, and feel that led to good results,” Arihara said through his translator.

Zach Davies walked just one over three hitless innings for the Cubs as five pitchers combined on a two-hitter. Javy Baez had a three-run home run, and Joc Pederson had two singles to drive two.

Joe Ross hasn’t pitched in a meaningful game since the 2019 World Series, so after opting out of last season because of the coronavirus pandemic, his first spring training start was a key step back for the Washington right-hander.

“I guess I wasn’t as jittery, to be honest, as I was expecting myself to be,” Ross said after retiring five of the seven batters he faced, three via strikeouts, and throwing 39 pitches on a windy afternoon.

“Similar, I guess, to riding a bike,” Ross said. “But I feel like the extended time off — there’s an initial soreness just in the offseason I think every pitcher goes through when you start playing catch again. I kind of went through that again maybe for a week or two. But then over time it kind of wears off and you get back into throwing shape and the mechanics and the timing come back to you.”

He is considered the leading candidate to earn the role as Washington’s fifth starter in a rotation that includes Max Scherzer, Stephen Strasburg, Patrick Corbin and Jon Lester (who is back in camp after surgery to remove his thyroid gland).

“He was happy to be back out there,” said Nationals manager Dave Martinez, who hopes to get Ross up to 50 pitches his next time out and four more starts before spring training ends. “It’s been a while.”

Nationals right fielder Juan Soto fouled a ball off his ear during an at-bat, but Martinez said the slugger was fine.

New shortstop Francisco Lindor got his first two hits for the Mets after starting 0 for 6 in the Grapefruit League. Bench bat José Martínez is expected to miss about four months with a torn meniscus in his left knee.

Martínez was hurt pursuing a double down the line while playing first base Sunday. “I think he's going to have surgery this weekend,” New York manager Luis Rojas said.

Andrés Giménez, who will likely be Cleveland’s starting shortstop, hit an inside-the-park homer in the rout.

Giménez’s drive to deep center in the fifth inning hit the wall and was trapped by Mariners outfielder Taylor Trammell, who couldn’t convince umpires he made the catch. Giménez came to the Indians this winter in the Francisco Lindor trade with the Mets.

Yu Chang hit his third homer this spring for Cleveland and catcher Ryan Lavarnway hit a three-run, pinch-hit shot in the seventh.

The Mariners only got four hits.

Corey Dickerson had three hits and scored twice for Miami. Garrett Cooper, who had two hits, and Isan Diaz each drove in two runs. Elieser Hernandez worked into the third inning, allowing three runs on four hits and striking out three before leaving with two outs.

Tyler O’Neill drove in three runs for St. Louis. Kwang Hyun Kim worked into the third inning of his start, giving up four runs on three hits and a walk.

Evan Longoria hit his first homer of the spring in the seventh inning for San Francisco. Logan Webb fanned three of his seven hitters in the start.

Caleb Smith struck out three and walked a batter in the three-inning start for Arizona and Alex Young followed with three innings of two-hit relief, striking out three. Wyatt Mathisen doubled to deep left in the fifth to drive in both Arizona runs.

Julio Urias retired nine straight to start, David Price followed with a perfect inning and five Dodger pitchers combined on a three-hitter. Corey Seager hit his first home run of the spring with two on in the second inning.

Mike Wright allowed three runs, four hits and a walk in the first inning for Baltimore and was able to get just one out. Zack Burdi came on in the second and gave up three runs on three walks and the home run to Seager. Andrew Vaughn doubled, but Chicago was largely stifled with most of its regulars in the lineup.

Parker Dunshee walked one and allowed five runs on six hits, two of them homers, over his three-inning start. Yusmeiro Petit got just two outs in the fourth while allowing two homers and five runs on five hits. Francisco Pena had a two-run home run in the sixth.

Mario Feliciano ripped a triple with two aboard in the bottom of the sixth for the winning runs for the Brewers. Brice Turang hit a solo home run in the fourth. Brandon Woodruff gave up two solo home runs in his two-inning start and Angel Perdomo worked a perfect seventh to earn the save.

Kyle Freeland allowed two hits and a walk over his three-inning start for the Rockies. Ryan Castellani came on in the fourth and walked three and hit a fourth, forcing in a run. Minor leaguer Jameson Hannah hit his first home run of the spring with two aboard.