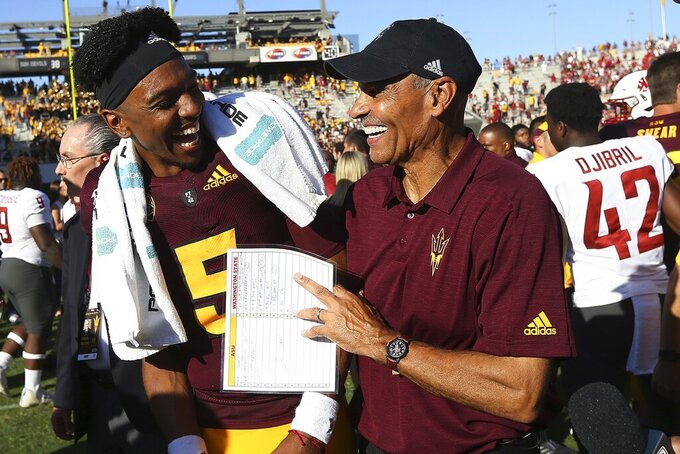 TEMPE, Ariz. (AP) — Herm Edwards has changed perceptions about Arizona State football, both with wins on the field and victories on the recruiting trail.

To continue the upward trajectory, the Sun Devils will not only have to hit the ground running during the Pac-12's pandemic-shortened season, they'll have to adjust to new schemes on both sides of the ball without the benefit of spring football.

“Putting in a new offense and defense, as far as applying it, it's in but the retention of the players (isn't),” Edwards said. “That said, every week you're going to have a different plan of what you're going to do defensively and offensively. I'm just excited about seeing what it's going to look like.”

Arizona State won seven games and played in a bowl game in 2018, exceeding outside expectations in its first season under Edwards, the former NFL player, coach and commentator.

Arizona State has some talent back on offense this season, led by sophomore quarterback Jayden Daniels and senior receiver Frank Darby, but will have to replace running back Eno Benjamin. The defense is loaded on the back end despite the loss of All-Pac-12 cornerback Kobe Williams and the line will be anchored by Jermayne Lole, who had a team-high 6.5 sacks last season.

Edwards also made big inroads on the recruiting trail, adding talent across the roster with a top-25 2020 class.

The key will be getting them all comfortable in new schemes.

Wanting to capitalize on Daniels' multiple talents, Edwards fired offensive coordinator Rob Likens and brought in Zak Hill from Boise State to run the offense. Hill was adept at using multiple formations and personnel groups with the Broncos and Edwards is hoping he can do the same in Tempe.

Instead of the 3-5-5 defense the Sun Devils ran under Gonzales, they'll be in a pro-style 4-3 that should help some of the less-experienced linemen up front.

"I've got a pretty good idea of what it looks like on defense because I've been in this system numerous times," Edwards said. “Offensively, it's very intriguing to me, kind of some things we're doing and how unfolds. I'm excited to watch it.”

Daniels had a superb freshman season as Arizona State's starter, throwing for 2,748 yards and 17 touchdowns with two interceptions. The lanky, 6-foot-3 quarterback was adept at keeping plays alive with his legs and rushed for 319 yards and three TDs.

Daniels enters his sophomore season with plenty of hype, expected to be one of the Pac-12's best quarterbacks.

“The thing I can’t stress upon him enough is we can’t get involved in the outside noises and the expectations that are all of a sudden put on (him),” Edwards said. “The playing part will take care of itself. I told him that I just want him to enjoy it. I want him to enjoy being a student-athlete and don’t get caught up in anything else. Act like you’re a freshman again. Just go out there and have fun with it.”

Arizona State will have a big hole at receiver to fill with Brandon Aiyuk playing in the NFL.

Darby could be the beneficiary.

The 6-1, 200-pound senior had 28 catches for 597 yards and eight TDs last season. He was the conference leader in yards per catch at 21.3 a year ago and figures to be Daniels' prime target this season.

While the university saw a big uptick in COVID-19 cases with the start of classes, the football team has been vigilant under Edwards and his staff with no reported cases.

The Sun Devils lost two games that would have likely eased them into the season and built confidence with the rejiggered Pac-12 schedule, against Northern Arizona and UNLV. Arizona State also lost what figured to be its first big test of the season, at home against BYU.

Now, the Sun Devils will jump right into the flames with a 9 a.m. Pacific game (a new Pac-12 time slot) at Southern California. Arizona State also has road games against Colorado and rival Arizona, with home games against California, Utah and UCLA.