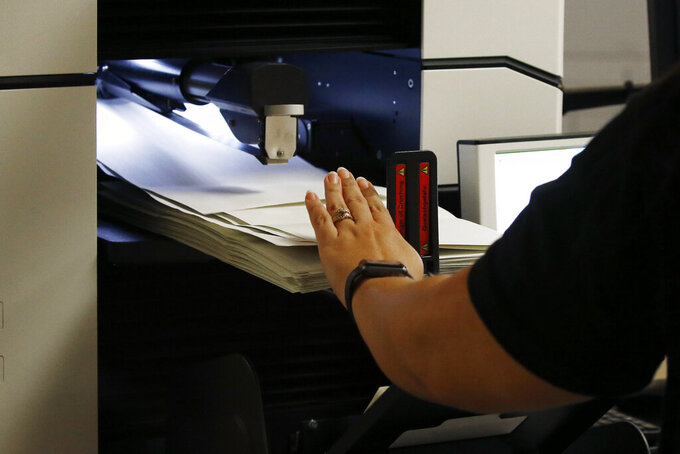 An official at the Maricopa County Recorder's Office reaches for ballots after votes were counted for the Arizona primary election Tuesday, Aug. 4, 2020, in Phoenix. (AP Photo/Ross D. Franklin)

PHOENIX (AP) — Arizona will be in the national spotlight in November as a presidential battleground and the home of one of the most closely watched Senate contests in the country. But Tuesday's primary featured few big-ticket contests.

Republican Sen. Martha McSally comfortably defeated businessman Daniel McCarthy, who ran to her right with an anti-government message and an appeal to voters who think the response to the pandemic is infringing on individual freedoms. He was not well known and spent little money to introduce himself to voters but still garnered about 20% of the vote in early returns.

Mark Kelly, a retired astronaut and the husband of former U.S. Rep. Gabrielle Giffords, secured the Democratic nomination after facing only a write-in candidate in the primary.

The McSally-Kelly contest pits two former combat pilots against each other in the race to finish the final two years of John McCain’s last term in the Senate. After McCain died in 2018, McSally was appointed to the seat and faces a tough battle to hold onto it.

In an acceptance speech on YouTube, Kelly highlighted his effort to portray himself as an independent outsider, saying, “Washington still isn’t working together to solve problems.”

In a statement, McSally looked to remind voters in a state where Republicans still outnumber Democrats that Kelly is a Democrat. A Democratic Senate majority, she said, would “usher in the most far Left policies that have become mainstream in the Democrat Party.”

Among U.S. House races, none is more prominent than the 6th District covering much of north Phoenix, Paradise Valley, Fountain Hills and Scottsdale. Hiral Tipirneni defeated three other Democrats seeking the chance to take on scandal-scarred Republican Rep. David Schweikert in a heavily Republican district. Democrats hope the seat could be in play thanks to a long-running ethics investigation of Schweikert and a growing skepticism of the GOP among white voters with a college degree.

Incumbent Democratic Rep. Tom O'Halleran in the sprawling 1st District held a lead over progressive champion Eva Putzova, while three Republicans are facing off to see who will be their party's candidate in the Democratic-leaning district.

Former Maricopa County Sheriff Joe Arpaio was neck-and-neck with his former chief deputy, Jerry Sheridan, as he looks to return to his old job.

A number of state legislative districts also face ideological battles among either the Republicans or Democrats.

At a mall in Phoenix's Biltmore neighborhood, a steady sprinkle of people entered a vacant restaurant space turned polling site. Poll workers wore masks, gloves and even face shields. For James Maynard, a 29-year-old Republican, it was the first election cycle where he opted to vote in person. He plans to do so again in November despite the pandemic.

“Like anything else it’s going to be chaotic but we’ll get through it,” said Maynard, who was wearing a mask decorated with the American flag. “If we continue to take the necessary precautions the CDC puts out, we should be fine.”

Election officials across the state have encouraged voters to request a mail ballot, and some have expanded options for early voting to reduce crowds on Election Day.

President Donald Trump has raised concerns that mail-in voting would be susceptible to voter fraud. That is a worry that Carol Santiago, 64, agrees with. She voted in person Tuesday in Phoenix as she does for every election.

“I don’t trust mail-in ballots," said Santiago, a Republican. "I personally just feel better and feel more secure no matter what election it is. I like to vote in person.”

Akil Zakariya, a 29-year-old Democrat, voted in person because he didn't request a mail-in ballot in time. He plans to vote by mail in the general election to avoid crowds. He called Trump's worries “propaganda.”

A spokeswoman for the Secretary of State's office said there were no major problems reported at the polls and turnout appeared very high for a primary.

“It seems like we’re getting record turnout,” said Sophia Solis.