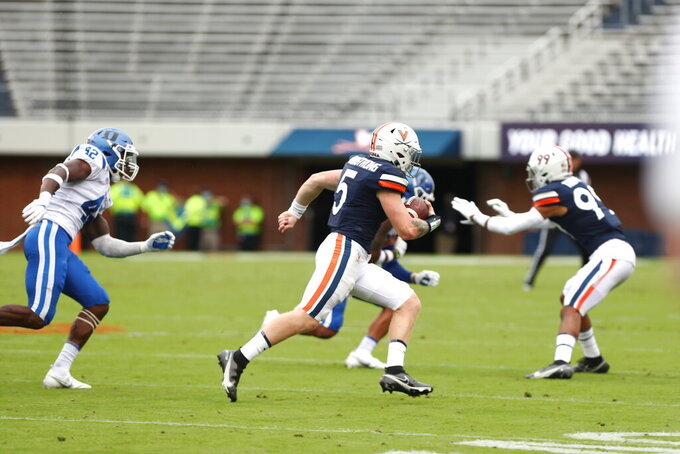 CHARLOTTESVILLE, Va. (AP) — It took Virginia four scheduled opponents to actually get to start their season, and four quarters to hit their stride in a 38-20 victory against Dukes on Saturday night.

Brennan Armstrong and Lavel Davis Jr. teamed up on a pair of early fourth-quarter touchdown passes and Virginia forced seven turnovers and pulled away.

“We kind of had a feeling we were going to win,” linebacker Zane Zandier, who led the Cavaliers with 15 tackles, said. “We just needed to make those plays to pull away.”

Armstrong and Davis got it started. The redshirt sophomore quarterback, in his first career start, hit Davis, a freshman, on an 18-yard fade route in the left corner of the end zone to give the Cavaliers (1-0, 1-0 Atlantic Coast Conference) a 24-20 lead. After Joey Blount's interception, Armstrong hit Davis for 26 yards, with Davis pulling away from two Duke defenders about eight yards from the end zone and powering his way in.

The Blue Devils (0-3, 0-3), whose games have all come in the season debut of their opponent, led 20-17 entering the fourth quarter before falling apart.

“We took a lead in the second half after being down at halftime and couldn’t finish the work,” coach David Cutcliffe said. “... Without question, we’ve got to evaluate what we’re doing on offense, how we’re doing it and what’s happening.”

The Blue Devils' start is their worst since the 2010 team lost its first six games.

Wayne Taulapapa ran for a pair of touchdown for the Cavaliers, including a 10-yard burst with about 5 minutes left that put the game away. It came after Duke backup quarterback Gunnar Holmberg fumbled on a fourth-and-1 play from the Blue Devils' 29.

Armstrong finished 24 for 45 for 269 yards in his first career start with two interceptions. Taulapapa gained 95 yards, a career-high, on 16 carries.

The Cavaliers have now won six straight in the series.

Virginia coach Bronco Mendenhall said this week that he figures the Cavaliers had been together for 12 weeks before getting into a game prep mode. They originally were scheduled to open against Georgia, but that was canceled when the pandemic hit.

Then it was VMI that opted not to play this fall, and then Virginia Tech, which had to postpone its game against its rival last Saturday because of a COVID-19 outbreak.

Said Zandier, “We had a lot of time to prepare."

Cutcliffe stopped short of saying he's going to reopen the competition at quarterback, even after Chase Brice threw four interceptions and was lifted in the fourth quarter.

“I don’t think I can go there that quick after a ballgame, till after I watch tape,” he said.

Duke: Brice had a rough day, throwing four interceptions, but made a few clutch plays despite often heavy pressure. He connected with Jalon Calhoun for 34 yards on a third-and-10 play from his own 16 on a drive that led to a field goal, and hit Darrell Harding Jr. for 31 yards on a third-and-9 play on a drive that ended with one of his picks. He finished 16 for 36 for 246 yards with two touchdowns. The Cavaliers finished with five sacks.

Virginia: Davis, who is 6-foot-7, finished with four catches for 101 yards, and his best catch was overturned. On the play, he caught a 27-yard pass over a defender, juggling the ball before cradling it as he hit the ground, but officials overruled the catch.

“He was one of our best-kept secrets,” Mendenhall said.

“It's going to only get better,” Armstrong said.

Duke is at home against Virginia Tech next Saturday.

Virginia travels to No. 1 Clemson in a rematch of last year's ACC championship game.