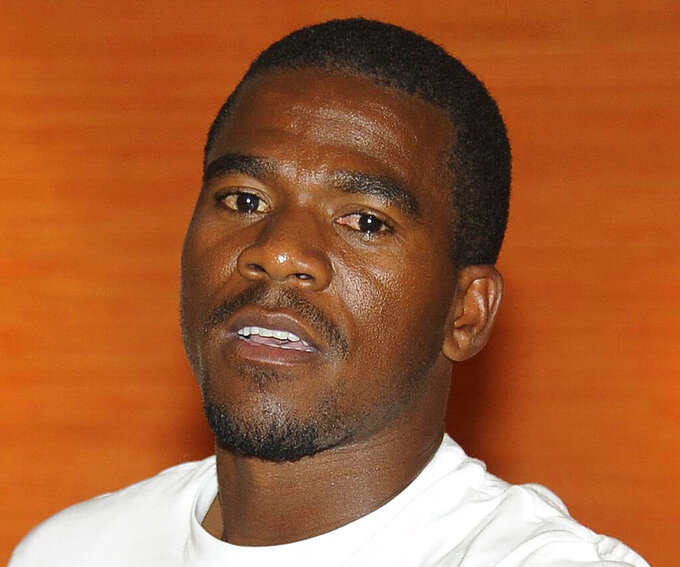 FILE — In this file photo taken Tuesday Oct. 14, 2014, South African soccer captain Senzo Meyiwa, is photographed in Johannesburg. Six years and one day since Meyiwa was fatally shot at his celebrity girlfriend's house, five men accused of being part of a plot to assassinate him in an organized "hit" appeared in a courtroom Tuesday, Oc. 27, 2020, only for the case to be beset again by confusion and doubt. (AP Photo/File)

CAPE TOWN, South Africa (AP) — Six years and one day since South Africa's popular national soccer team captain was fatally shot at his celebrity girlfriend's house, five men accused of being part of a plot to assassinate him appeared in a courtroom Tuesday only for the case to be beset by confusion and doubt.

The five suspects claimed they were not involved in the killing of Senzo Meyiwa, and some of them accused police of lying about when they were arrested and the circumstances of their arrests. All of them refused to stand in the area of the courtroom where suspects are formally indicted. Wearing masks because of the coronavirus and with their arms folded and heads bowed, they were charged with murder, attempted murder, robbery and firearm offenses.

Some of the men said they were arrested months ago. Others said they were already in jail for unrelated crimes. It cast doubt on an announcement by police on Monday — the sixth anniversary of Meyiwa's killing — that they had arrested the five that morning in operations in two provinces.

“I'm shocked,” Meyiwa's brother, Sifiso Meyiwa, said after the dramatic hearing at Boksburg Magistrate's Court near Johannesburg. He uttered those exact same words a day earlier when private investigators he enlisted to help solve his brother's killing announced the soccer player was shot in an “assassination” and not, as previously believed, in a house robbery.

The judge said there would be a second court hearing next month, while police maintained they had a strong case against the five suspects, including ballistic evidence that tied at least one of them to the murder weapon. The gun had recently been recovered, police said.

The killing in 2014 of the national team goalkeeper angered South Africans, although they are generally inured to violent crime in a country where more than 50 people are murdered a day, according to official crime statistics. At the time, police said Meyiwa, a big star in his country, was killed in an armed robbery, a tragedy but a relatively common one in South Africa.

Meyiwa's death was mourned by many global soccer figures, including Sepp Blatter, the president of world body FIFA at the time.

South Africa's anger intensified as years passed and police failed to solve the case, and numerous apparent missteps by them were highly publicized. A man arrested for Meyiwa's killing in the days after was released due to a lack of evidence. The investigating team was changed amid allegations of incompetence. Unconfirmed media reports said the gun used in the shooting was ultimately found in a locker at a police station.

One man in a crowd that gathered outside the courthouse Tuesday to demand justice for Meyiwa encapsulated the overriding feeling: “The justice system is failing,” he said. “If it has failed Senzo for six years, then what about me? Who am I?”

Some in that crowd wore the black and white shirts of Meyiwa’s club, Orlando Pirates, and others the uniforms of rival South African soccer teams, indicating a sense of unity among people still angry at the police failures. They mentioned Meyiwa’s father, Sam, who had pleaded regularly and for years that his son’s killers be found. Sam Meyiwa died last year without seeing justice for his son.

The case appeared to be slipping away from police, who established a “cold case team” in 2018. Frustrated, Meyiwa's family also enlisted the help of the team of private investigators led by Gerrie Nel, the former state prosecutor known for his bullish questioning in the globally-televised Oscar Pistorius murder trial.

Police minister Bheki Cele announced the “major breakthrough” in the Meyiwa case and the arrests on Monday but declined to disclose details of the investigation. But Nel, appearing at a separate news conference, said police had shared case files with him and that the police and Nel's investigating team now believed Meyiwa wasn't shot in a robbery. It was an “assassination,” Nel said, and the “mastermind” of the crime had not been arrested.

"We agree that having gone through the evidence that this is a hit and we’ve also indicated our full cooperation in exposing the mastermind and ensuring that the mastermind is also prosecuted,” Nel said.

Neither police nor Nel offered a motive for the killing.

There was yet another twist Tuesday after the court hearing for the five suspects, which police minister Cele said were only the “first” suspects. A document released by prosecutors showed police wanted to obtain the cellphone records of Meyiwa's girlfriend at the time, a famous South African singer, and think she had been in contact with one of the suspects. She may have borrowed money to pay the “hitmen,” the document said.

Prosecutors said it was an internal document mistakenly released to the media but admitted it was genuine.