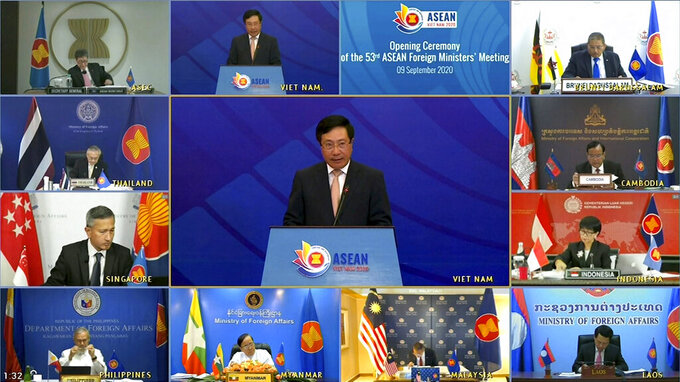 This image taken from video provided by VTV shows ASEAN foreign ministers watching Vietnamese Foreign Minister Pham Binh Minh, center, delivering a speech in Hanoi, Vietnam, during the opening of ASEAN Foreign Ministers' Meeting on Wednesday, Sept. 9, 2020. Southeast Asia's top diplomats are holding their annual talks by video Wednesday to discuss the immense crisis wrought by the coronavirus pandemic and rising tensions in the South China Sea amid the escalating rivalry between Washington and Beijing. (VTV via AP)

HANOI, Vietnam (AP) — Southeast Asia’s top diplomats held their annual talks by video Wednesday to discuss the immense crisis wrought by the coronavirus pandemic and rising tensions in the South China Sea amid the escalating rivalry between Washington and Beijing.

The Association of Southeast Asian Nations ministerial meetings, delayed by a month, were held online due to continuing health risks posed by COVID-19. The 10-nation bloc’s foreign ministers were to meet Asian and Western counterparts, including those from the U.S. and China, later in the week, capped by an annual security forum.

Vietnam is hosting the talks as this year’s chairman of the diverse group. Prime Minister Nguyen Xuan Phuc called for regional solidarity amid the headwinds in an austere opening ceremony attended by a few dozen diplomats in the capital, Hanoi.

“The valuable fruits of our cooperation are being tested in an environment full of volatility and unprecedented challenges, especially the COVID-19 pandemic,” Phuc said.

The pandemic has delayed or canceled dozens of meetings and shut out the colorful ceremonies, group handshakes and photo-ops that have been the trademarks of ASEAN’s annual gatherings.

The talks focused on combating the pandemic and ways to help member states recover economically. The contagion has devastated the region’s manufacturing, export, travel and tourism industries and sparked the worst economic recessions in decades across the region of 650 million people.

Southeast Asian nations have been impacted by the pandemic differently, with hard-hit Philippines grappling with more than 245,000 confirmed COVID-19 infections, including nearly 4,000 deaths, and the tiny socialist state of Laos reporting just 22 cases. The Philippines and Indonesia each have more than double the infections reported by China, where the outbreak started late last year.

A regional stockpile of medical supplies has also been approved, and a study to be financed by Japan will research the possibility of establishing an ASEAN center on public health emergencies, according to the diplomat, who spoke on condition of anonymity as he was not authorized to speak publicly.

A long-thorny issue on the agenda is the territorial disputes in the South China Sea involving China, Taiwan and ASEAN members Brunei, Malaysia, the Philippines and Vietnam.

When the territorial conflicts were discussed, “concerns were expressed by some ministers on the land reclamations, activities and serious incidents in the area which have eroded trust and confidence, increased tensions and may undermine peace, security and stability in the region,” the ministers said in a draft communique, a copy of which was seen by The Associated Press.

In July, U.S. Secretary of State Mike Pompeo declared that Washington regards virtually all of China’s maritime claims in the disputed offshore region outside of its internationally recognized waters to be illegitimate. Although it remains neutral in territorial disputes, the Trump administration was in effect siding with the four ASEAN claimant states, along with Indonesia, which have opposed China’s claims to virtually the entire waterway.

China then accused the U.S. of sowing discord in the strategic region and last month, its military reportedly test-fired two missiles in the South China Sea during exercises.

China has pushed for the resumption of negotiations with ASEAN on a code of conduct aimed at preventing armed clashes in the disputed waters. But Hoang Thi Ha of the ISEAS-Yusof Ishak Institute in Singapore said major differences between China and rival claimant states would stymie any breakthrough or an early agreement.

“Given the recent developments both on the lawfare front and tensions at sea, I don’t see much silver lining,” she told The Associated Press.

Pompeo and his Chinese counterpart, Wang Yi, have confirmed their attendance at the ASEAN Regional Forum on Saturday, Asia’s largest security forum, which will also be done by video. North Korea’s foreign minister will skip the forum but its representative to ASEAN will participate, according to Vietnam’s foreign ministry.