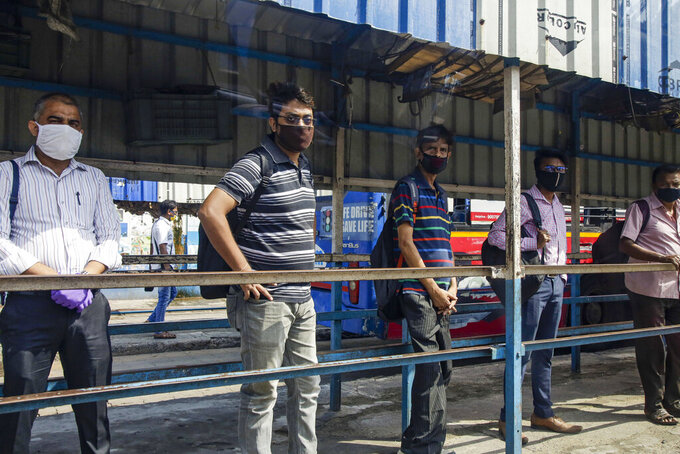 People wait outside a bus terminus in Kolkata, in the eastern Indian state of West Bengal, Wednesday, June 3, 2020. More states opened up and crowds of commuters trickled onto the roads in many of India's cities on Monday as a three-phase plan to lift the nationwide coronavirus lockdown began despite an upward trend in new infections. (AP Photo/Bikas Das)

CANBERRA, Australia (AP) — Canberra Airport opened a register for travelers interested in flying from the Australian capital to New Zealand on July 1 in a proposed resumption of international travel.

The proposal to restart flights connecting the two capitals was under discussion between the two governments as well as Qantas and Air New Zealand, Canberra Airport Managing Director Stephen Byron said Thursday.

Under the proposal, the flights between Canberra and Wellington would not require quarantine of passengers. Canberra Airport opened its register of interest for the first flight on July 1 and 140 names were added within the first hour.

“There’s very strong demand for these flights which supports the commercial proposition, but it also underlines the social importance of starting these flights as soon as the health authorities deem it safe to do so,” Byron told The Associated Press.

“We do think that the time is right now for government to set a date and for the parties to work together to deliver the service on that date,” Byron added.

Return flights would leave Wellington and Canberra on the first morning that flights were allowed, he said.

“We have to be safe, there’ no doubt, but the number of infections on both sides is very low. It is crucial that this is just a trial ... and we’ve chosen the two most COVID-safe cities in the world, almost,” Bryon said.

New Zealand is on the verge of eradicating the virus after it notched a 13th straight day with no reported new infections. Only a single person in the nation of 5 million people is known to still have the virus, and that person is not hospitalized. However, it remains likely that the country will import new cases once it reopens its borders, and officials say their aim remains to stamp out new infections as they arise.

— INDONESIA TO EASE LOCKDOWN: Authorities in Indonesia’s capital will ease a partial lockdown as the world’s fourth most populous nation braces to gradually reopen its economy. Jakarta Gov. Anies Baswedan announced the reopening of mosques, churches and temples on Friday but only at half capacity. Offices, public transport. restaurants, grocery stores and beaches will be allowed to operate also at half capacity. Malls and parks are scheduled to reopen mid-June. Schools remain shut this month. Baswedan said the decision to reopen follows a significant decrease in the number of infections in recent days. He said everyone except elderly, children under 5, pregnant women and sick people will be allowed to leave their homes wearing masks. Jakarta has recorded 7,690 confirmed cases with 523 deaths, while the toll nationwide stood at 28,818 infections and 1,721 fatalities.

— CURFEW IN SRI LANKA: Sri Lanka imposed a two-day curfew across the country on Thursday and Friday, in an apparent move to restrict public movement during a key Buddhist holiday and a long weekend. Sri Lanka’s majority Buddhists celebrate Poson Poya on Friday, which marks the introduction of Buddhism in the 3rd century B.C. The curfew came nearly two weeks after the government relaxed the 2-month lockdown. There are 1,749 confirmed cases in Sri Lanka, including 839 who have recovered, and 11 deaths.

— ASEAN SEEKS TO PROTECT TRADE, INVESTMENT: The Association of Southeast Asian Nations and its partners China, South Korea and Japan agreed Thursday to work together to protect trade and investment disrupted by the coronavirus, Vietnam's trade minister said Thursday. “The ministers committed not to introduce any further barriers, both tariff and non-tariff, to create favorable conditions for trade and investment and avoid their disruption,” Trade Minister Tran Tuan Anh said after a special online ministerial meeting to address challenges from the pandemic. He said the ministers agreed to avoid unnecessary policies that could hinder the flow of essential goods, medication and health equipment. Lockdowns imposed to curb the pandemic have disrupted the movement of goods and personnel, affecting manufacturing in many ASEAN countries.

— MYANMAR ELECTIONS ON TRACK: Myanmar’s Election Commission said this year’s general election will take place as planned in November and won't be postponed because of the coronavirus crisis. The exact date will be announced later. Myanmar on Thursday announced one new confirmed case of COVID-19, bringing its total to 234 including six deaths.

— AUSTRALIA OFFERS GRANTS FOR NEW HOMES: Australia’s government has thrown the residential building sector a lifeline from a pandemic downturn by offering 25,000 Australian dollar ($17,323) grants to people who want to build new homes or substantially renovate existing dwellings. Prime Minister Scott Morrison said Thursday the grants were expected to cost AU$680 million ($471 million) by the end of the year. The grants would “support those families and those Australians whose dream it was to build their home or to do that big renovation -- a dream that they thought might have been crushed by the coronavirus,” Morrison told reporters. The government announced Wednesday that the Australian economy had entered its first recession since 1991.

— INDIAN NURSES PROTEST CONDITIONS: About 400 nurses from a leading hospital in India's capital are protesting working conditions amid ongoing talks with hospital officials. The nurses at the All India Institute of Medical Sciences, at the forefront of treating COVID-19 patients, are demanding uniform four-hour duty periods with personal protective equipment and proper areas to put them on. Hospital authorities refused to comment on the protest. More than 300 healthcare workers have been infected by the virus at the hospital since February, the Press Trust of India news agency reported Wednesday. India has faced a spike in infections in recent weeks, mostly in cities. Its reported death toll surpassed 6,000 on Thursday. It confirmed 9,304 new cases, in another record single-day spike, raising its total reported infections to 216,919.