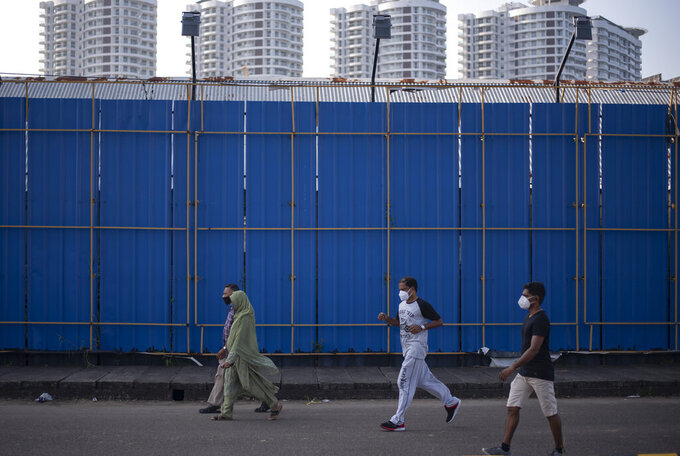 MELBOURNE, Australia (AP) — Australia’s once hard-hit state of Victoria has gone three weeks without a new COVID-19 case for the first time since February.

There are two just active coronavirus cases remaining across Victoria, according to figures released by the health department on Friday.

And after having other states in Australia shut their borders to Victoria, the state has decided to close its border with neighboring South Australia, which is experiencing a new spike in cases.

Victoria went through a prolonged surge of the virus in which the city of Melbourne was locked down, overnight curfews imposed and bans imposed on family gatherings and extended travel outside the city.

Of Australia's 907 coronavirus deaths, 819 have occurred in Victoria.

Friday's milestone came as Victoria established a “hard border” with South Australia that will allow only emergency or medical cases and truck drivers carrying freight to pass through. It is the first time Victoria has shut its border to any state.

South Australia was in its second day of a six-day lockdown on Friday to head off a potential new surge of its own.

South Australia Premier Steven Marshall said the state had learned from watching Victoria and other parts of the world.

“COVID-19 is very difficult to eradicate once it gets a foothold in a community,” Marshall said. “So we need this circuit-breaker, this breathing space for a contact tracing blitz.”

— India’s total number of coronavirus cases since the pandemic began has crossed 9 million. Nevertheless the country’s new daily cases have seen a steady decline for weeks now. The Health Ministry reported 45,882 new infections and 584 fatalities in the past 24 hours on Friday. The death toll since the pandemic began is more than 132,000. Authorities in capital New Delhi are fighting to head off nearly 7,500 new cases a day while ensuring that the flagging economy doesn’t capsize again.

— South Korea’s prime minister has urged the public to avoid social gatherings and stay at home as much as possible as the country registered more than 300 new virus cases for a third consecutive day. The Korea Disease Control and Prevention Agency said Friday the 363 cases reported in the past 24 hours took the country’s total to 30,017 with 501 deaths. South Korea’s cases have been on a steady rise since it relaxed physical distancing rules last month. Prime Minister Chung Sye-kyun on Friday asked people to minimize yearend parties and gatherings and called on businesses to let employees work from home. Local authorities on Thursday toughened distancing guidelines in the greater Seoul area, the southern city of Gwangju and some parts of eastern Gangwon province.

— Hong Kong has suspended in-person classes for lower primary school students after the city’s top health official said the coronavirus situation in the city was rapidly deteriorating. Classes for primary 1 to 3 students will be suspended for two weeks from Monday. The suspension comes just over a week after kindergartens were ordered to close following an outbreak of upper respiratory tract infections. Hong Kong confirmed 26 new coronavirus infections on Friday, 21 of which are local cases. “I would appeal to people to stop all unnecessary gathering activities because the situation is severe now in Hong Kong,” Hong Kong health minister Sophia Chan said.

— Authorities in Sri Lanka are suspending all passenger train service for two days as COVID-19 cases surge in the capital and its suburbs. The general manager of Sri Lankan Railways, Dilantha Fernando, said Friday that trains will be halted on Saturday and Sunday. Restrictions have also been placed on public buses. Authorities have locked down many parts of Colombo and surrounding areas since last month and have closed schools and key public offices. Police have been strictly enforcing the regulations and have arrested more than 100 violators. The recent surge came from two clusters — one at a garment factory and other at a fish market. Confirmed cases from the two clusters rose to 15,329 on Friday. Sri Lanka’s total confirmed cases since March reached 18,841 on Friday, with 73 fatalities.

— The governor of Japan’s northernmost prefecture of Hokkaido, where infections are rising rapidly and new daily cases exceeded 300 for the first time, urged residents to stay home over the upcoming three-day weekend. Japan has seen infections climb since earlier this month, with 2,383 reported Thursday, prompting medical experts to urge the government to take tougher actions than merely relying on voluntary mask wearing. Hokkaido Gov. Naomichi Suzuki said the prefecture is at a critical stage of whether it can manage the infections. “Please avoid non-essential outings if you are not confident that you can fully protect yourselves,” he said. Prime Minister Yoshihide Suga and other top officials have resisted calls to suspend a government-sponsored travel and dining subsidy campaign in fear of further hurting the pandemic-hit economy. Suga said the government has no plans to restrict travel or business, and urged people to keep their masks on at all times when not actively eating. But experts on a government COVID-19 taskforce on Friday urged the government to take tougher steps. It said individual efforts alone can no longer effectively curb the virus's spread. Tokyo reported 522 new cases Friday, the second day in a row with more than 500. Nationwide, Japan has more than 125,000 cases, with less than 2,000 deaths.