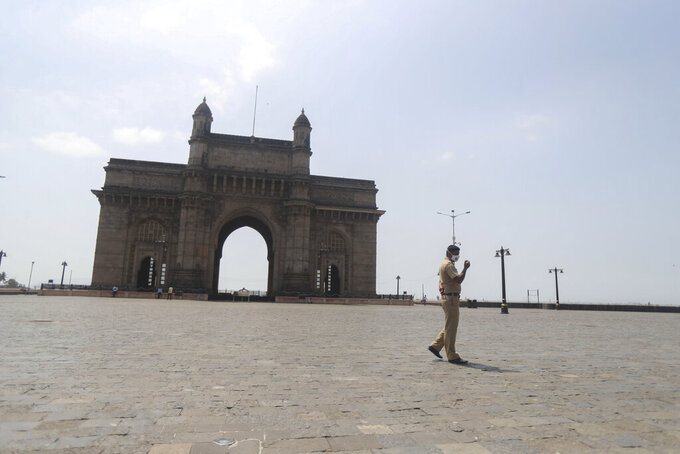 An Indian police officer wearing mask patrols at the Gateway of India in Mumbai, India, Monday, April 5, 2021. India reported its biggest single-day spike in confirmed coronavirus cases since the pandemic began Monday, and officials in the hard-hit state home to Mumbai are returning to the closure of some businesses and places of worship in a bid to slow the spread. (AP Photo/Rafiq Maqbool)

MANILA, Philippines (AP) — The Philippine government extended a lockdown by another week Monday after an alarming spike in coronavirus infections continued to surge and started to overwhelm many hospitals in the capital and outlying regions.

The government-run Lung Center of the Philippines became the latest hospital in the capital region to announce over the weekend that it can no longer accept walk-in patients after its COVID-19 ward reached full capacity and its emergency room was handling twice its capacity.

“We are not just full. We are very full. In fact, the hospital has been full for the past two weeks,” Lung Center spokesman Dr. Norberto Francisco said.

Other hospitals said they could expand bed capacity but lacked enough medical workers partly because many had been infected.

“No one could have probably foreseen how infectious these new variants are and as a result of which we have these ballooning numbers,” Roque told ABS CBN News, adding officials would inaugurate a 110-bed intensive-care unit in a hospital in the capital region Monday and were planning to launch mobile COVID-19 intensive-care centers.

The Philippines has reported more than 795,000 COVID-19 cases with 13,425 deaths, the highest totals in Southeast Asia after Indonesia.

— Citywide testing in a Chinese border city near Myanmar has uncovered 20 more cases of coronavirus infection, the National Health Commission reported Monday, raising the total in the outbreak past 100. Ruili is working to vaccinate all its 300,000 residents to try to get under control an outbreak that is something of an anomaly in a country that has all-but eliminated local transmission. Five of the newly reported cases were people who showed no symptoms, bringing the city's totals to 51 cases of COVID-19 and 56 cases of infection without symptoms. Those categories are counted separately in China, which treats COVID-19 patients in hospitals and puts infected people without symptoms in isolation. Some of those infected are Myanmar nationals and authorities have offered free vaccinations to foreigners living and working in the city while tightening border security. China got off to a slow start in vaccinating its population of 1.4 billion people, despite having four approved vaccines, but has now rolled out a nationwide vaccination drive in an effort to build herd immunity.

— India recorded more than 100,000 new coronavirus cases Monday for the first time since the pandemic began. The Health Ministry said 103,558 infections were reported in the last 24 hours, exceeding the previous high of 97,894 in late September and taking India’s overall tally to 12.5 million. Fatalities rose by 478 in the past 24 hours, raising the death toll to 165,101. New infections in India are currently being reported faster than anywhere else in the world. The biggest contributor to the new surge has been the western state of Maharashtra, home to the commercial capital of Mumbai. The state has announced stringent COVID-19 restrictions, including night curfews and weekend lockdowns. The government has intensified its vaccination drive in recent weeks, now administering over 3 million jabs a day. But the shots have been slow to reach India’s nearly 1.4 billion people.

— Bangladesh began enforcing a weeklong nationwide lockdown Monday, shutting shopping malls and transportation as authorities try to stop a surge in coronavirus infections and deaths. Health authorities said they were facing overwhelming pressure in intensive care units in recent weeks because of severe infections. This is the nation's second lockdown after the first last March. On Monday, authorities suspended operations of all domestic flights, river transport, and trains. Only emergency services will remain operational. Banks must limit their hours, and factories must facilitate their workers' commutes. The government has asked people not to go out from 6 p.m. to 6 a.m. Bangladesh has reported 637,364 virus cases since the pandemic began, with 9,266 deaths.

— Semi-emergency coronavirus measures began in Osaka and two other prefectures Monday as Japan tries to minimize the economic impact to specific areas where infections are rising back less than four months before the Tokyo Olympics. Experts have raised concerns about Osaka’s rapid spike, with many cases linked to new variants. Osaka reported 593 new cases on Sunday, surpassing Tokyo’s 355. The measures in effect until May 5 ask restaurants and bars in six cities, Osaka, as well as Nishinomiya, Amagasaki, Ashiya and Kobe in the neighboring Hyogo prefecture, and Sendai in northern Japan, to close by 8 p.m. and ensure adequate ventilation. Residents in the designated cities are asked to follow safety measures and avoid karaoke and non-essential outings.

— Thai health officials were considering the closure of entertainment venues in Bangkok for two weeks on Monday after an outbreak of coronavirus cases in nightspots in and around the capital, and another at a prison in the south. Apisamai Srirangsan, a spokesperson for the Center for COVID-19 Situation Administration, said 194 new coronavirus cases were confirmed, most from Bangkok entertainment venues and from Narathiwat prison. Thailand has had 29,321 confirmed cases, including 95 deaths. The center ordered affected nightspots closed until they undergo deep cleaning. Bangkok’s city government announced the names of the venues involved and urged people who patronized them over the past month to be tested for COVID-19. The outbreaks come just ahead of the major holiday of Songkran in mid-April, which usually sees an exodus of people from cities to visit relatives in other provinces and is generally celebrated over an entire week.

— Sri Lankan health authorities on Monday began inoculating thousands of Chinese nationals in Sri Lanka using the Sinopharm vaccine donated by China. Sri Lanka received the donation of 600,000 doses last week but won't administer it to Sri Lankans until it gets clearance from the World Health Organization. Authorities say more than 4,000 Chinese nationals are in Sri Lanka working in different projects. Sri Lanka has used the Oxford-AstraZeneca vaccine since January to vaccinate more than 903,000 people. It also plans to buy 7 million doses of the Russian Sputnik V vaccine.