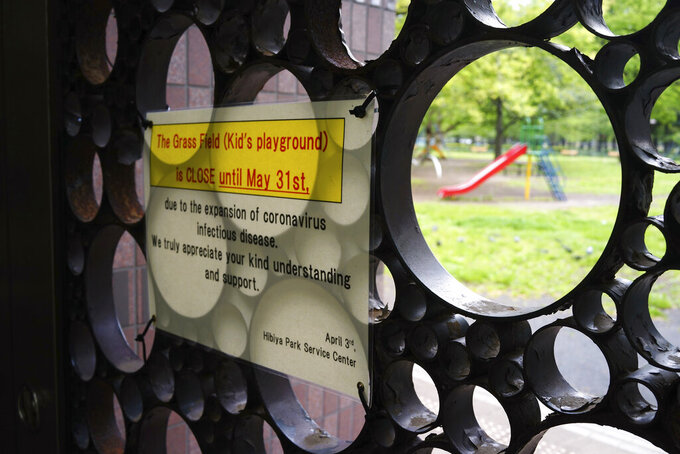 A notice for closing the playground is seen near an empty playground at a park in Tokyo Tuesday, April 28, 2020. Japan's Prime Minister Shinzo Abe expanded a state of emergency to all of Japan from just Tokyo and other urban areas as the virus continues to spread. (AP Photo/Eugene Hoshiko)

BANGKOK (AP) — Surfers greeted a spectacular sunrise in Christchurch, construction workers purchased their favorite espresso coffees and some lawmakers returned to Parliament in New Zealand's capital, Wellington, on Tuesday as some aspects of life began returning to normal.

The country had been in a strict lockdown for over a month to prevent the spread of the coronavirus, but those conditions were eased a little on Tuesday to allow some parts of the economy to restart as new infections wane.

Among those places to reopen were construction sites, as well as cafes and restaurants that sell takeaway coffees and food. People are still required to maintain social distancing and work from home if they can.

New Zealand recorded three new cases of the coronavirus on Tuesday, bringing its confirmed total to 1,472, including 19 deaths.

— HUNDREDS HIT THE BEACH: Sydney’s iconic Bondi Beach reopened to swimmers and surfers on Tuesday despite the local area having Australia’s highest concentration of COVID-19 cases. People can only enter during daylight hours, cannot linger on the sand and are counted to ensure social distancing. Hundreds braved cool autumn weather to return to the water soon after the gates opened. A virus testing tent is nearby due to the high rate of infections, particularly among backpackers who often live in crowded conditions. The municipality that includes Bondi says it continues to have the highest number of COVID-19 cases in Australia.

— VACCINE NEEDED BEFORE OLYMPICS: The head of Japan’s medical association said it will be difficult to hold the Olympics without coronavirus vaccines. “I hope vaccines and drugs will be developed as soon as possible," Japan Medical Association President Yoshitake Yokokura told a video news conference in Tokyo. The Tokyo 2020 Games have been rescheduled to July next year. Experts have said it could take a couple of years or longer to develop vaccines that are safe and effective for clinical use.

— BANGLADESH SEES BIGGEST 1-DAY INCREASE: Bangladesh on Tuesday confirmed 549 new infections, its biggest one-day increase so far. The country has confirmed 6,462 cases, including 155 deaths. Bangladesh, a nation of 160 million people, is facing challenges in dealing with the coronavirus because of its fragile health care system.

— S. KOREA URGES COOPERATION WITH N. KOREA: South Korea has repeated calls for joint efforts with North Korea to fight the coronavirus. A South Korean presidential official, who spoke on condition of anonymity, citing protocol, said Tuesday that Seoul doesn’t expect possible efforts to clash with sanctions against North Korea over its nuclear program. South Korean President Moon Jae-in said earlier that joint anti-virus efforts could provide a “new opportunity” for inter-Korean engagement. But the North has ignored the calls, saying there hasn’t been a single virus case on its territory, a claim that is questioned by many outside experts. — AP writer Kim Tong-hyung in Seoul

— JAPAN TO APPROVE ANTIVIRAL DRUG: Japan said it will approve remdecivir, a closely watched antiviral drug made by Gillead Sciences Inc., for the treatment of COVID-19 patients in the country. The drug is expected to be the first approved COVID-19 drug in Japan. Chief Cabinet Secretary Yoshihide Suga said Tuesday that Japan has been part of multinational testing of remdecivir and that it was moving ahead overseas. Japan has a fast-track permit for emergency use of drugs approved overseas. Remdecivir was originally developed to treat Ebola and has been also used for SARS and MERS, but is still under investigation for COVID-19.

— SOUTH KOREA SHIFTING FOCUS: South Korea reported 14 new cases and one more death, bringing its totals to 10,752 cases and 244 fatalities. Its Centers for Disease Control and Prevention said four of the fresh cases were from Seoul and two from hardest-hit Daegu. With its caseload slowing, South Korea has shifted its focus to easing the economic shock. President Moon Jae-in said the pandemic has hurt major industries including airlines, marine transport and shipbuilding while calling for “all-out efforts” to protect companies and jobs.

— CHINA STATS DROP: The Chinese city of Wuhan, which was the original epicenter of the pandemic, again reported no new coronavirus cases or deaths Tuesday and its hospitals remained empty of virus patients for a second straight day. China's six new cases were three imported from overseas and three in Heilongjiang province bordering Russia. No new deaths were reported nationwide and just 648 current confirmed cases remained registered. China has reported 4,633 deaths among 82,836 cases.

— CHINA SAYS UNFAIR TO CALL KITS ‘FAULTY’: The Chinese Embassy in India said Tuesday that it was “unfair and irresponsible” to label Chinese testing kits procured by India as “faulty.” On Monday, India canceled orders to procure rapid antibody testing kits from two Chinese companies after quality issues and controversies over its price. “The quality of medical products exported from China is prioritized. It is unfair and irresponsible for certain individuals to label Chinese products as ‘faulty’ and look at issues with preemptive prejudice," said Chinese Embassy spokesperson Ji Rong said.

— HONG KONG REPORTS 3RD DAY WITH NO NEW CASES: Hong Kong reported no new coronavirus cases for a third straight day Tuesday and announced a resumption of public services next week and a relaxation of quarantine restrictions on travelers from mainland China. The eased quarantine will apply to students crossing the border daily to attend school in Hong Kong, and travelers deemed economically important to the city. However, an entry ban on non-residents flying into the city has been extended to June 7.

— MALAYSIAN BUSINESSES URGE REOPENING: Malaysian businesses have urged the government to end a weeks-long virus lockdown following a sharp decline in infections. Daily cases have dropped to double digits in the past two weeks with 31 new infections reported Tuesday, the lowest since a partial lockdown began March 18. Malaysia now has 5,851 cases with 100 fatalities. The Malaysian International Chamber of Commerce and Industry said the lockdown, which has been extended until May 12, should be lifted immediately to revive the economy and save jobs.