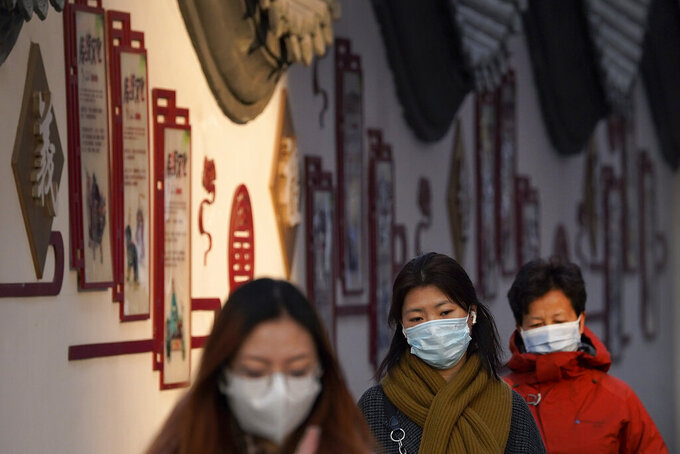 Health authorities ordered 137 people who had been in close contact with the man to stay in a central quarantine facility and shut down an English center where he works as a teacher, the newspaper said.

Vietnam’s borders remain closed in an attempt to keep out the virus. Only limited international flights are operating to repatriate Vietnamese nationals and transport foreign diplomats and experts.

The country has reported 1,347 coronavirus cases, including 35 deaths. Nearly half of the confirmed cases were imported, according to the Health Ministry.

— Hong Kong leader Carrie Lam on Tuesday urged residents to stay home as the city grapples with a resurgence of the coronavirus, which has infected over 500 people in the past week. Lam asked citizens to “refrain from social gatherings” and said that people, in particular the elderly, should remain at home. “The latest wave of the epidemic is rather severe. Every one of us should do our best and exercise a high level of discipline to fight the pandemic,” she said at a regular news conference. “The coming two weeks is a crucial period.” Many of the new infections in Hong Kong have been tied to dance studios, and outbreaks have also been found among staff and guests at several restaurants. The new wave of infections has led authorities to tighten social distancing restrictions, including closing entertainment venues such as karaoke bars and game centers and limiting public gatherings to two people.

— Coronavirus quarantine restrictions will continue in the Philippine capital during the Christmas season in Asia’s largest Roman Catholic nation. President Rodrigo Duterte said in televised remarks late Monday that the “general community quarantine” will continue during December in Metropolitan Manila and seven other cities and provinces. The restrictions ban large public gatherings, in-person school classes and entertainment businesses, but allow shopping malls, restaurants and essential stores, including barbershops, to operate with required safeguards. Duterte lamented that many people still defy social restrictions such as the use of face masks and warned of a possible resurgence of the virus. “In the Philippines, it’s hard-headedness," Duterte said. "Why would it not increase when everybody is going out?” The Philippines has reported more than 431,600 coronavirus infections, the second-highest in Southeast Asia, and at least 8,392 deaths.

— Tokyo Gov. Yuriko Koike is asking senior citizens 65 or older and those with underlying health conditions not to use the government’s GoTo discount campaign to travel in and out of Tokyo. New cases in Tokyo and other major cities have spiked in recent weeks, with serious cases rapidly filling hospitals and impacting the treatment of other patients. Koike says she is focusing on how to stop serious cases and prevent the medical systems from collapsing. Koike issued a request for restaurants serving alcohol, bars and karaoke chains to close early until mid-December. Aichi, Osaka and Hokkaido have taken similar steps.