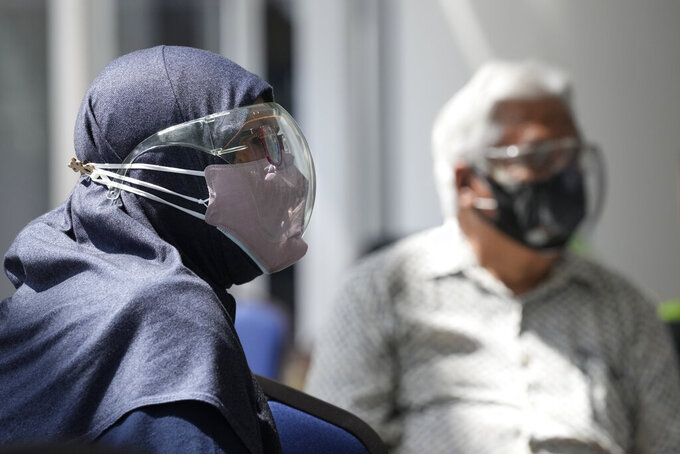 A Muslim couple wearing face mask and face shield while waiting for vaccine for the coronavirus disease (COVID-19) at a vaccination centre in Kuala Lumpur, Malaysia, Monday, May 31, 2021. An exhibition center in Malaysia has been turned into the country's first mega vaccination center as the government aims to speed up inoculations amid a sharp spike in infections. (AP Photo/Vincent Thian)

HANOI, Vietnam (AP) — Vietnam plans to test high-risk groups in its largest city for the coronavirus and imposed more restrictions Monday to deal with a growing COVID-19 outbreak.

People in Ho Chi Minh City are only allowed to leave home for necessary activities and public gatherings of more than 10 people are banned for the next two weeks, the government announced. Prior to the order, the city, also Vietnam's economic hub, shut down non-essential business last Thursday when cases started to increase.

Vietnam News Agency said the city authority is planning to test high-risk groups in the population of 9 million with a testing capacity of 100,000 samples a day.

The newspaper also said police had filed a case Sunday against the couple who head a Protestant church mission for “spreading dangerous infectious diseases,” citing poor health protocols applied at the premises.

At least 145 cases of coronavirus infection have been reported with links to the Revival Ekklesia Mission, a Protestant sect, and the city district of Go Vap, where the church is based, has been locked down. Vietnam has since banned all religious events nationwide.

The report said the husband and wife accused in the case were responsible for leading and organizing activities at the church. They were not identified and are not under arrest.

Since the end of April, a surge in COVID-19 has spread to 31 municipalities and provinces in Vietnam with over 4,000 cases, almost double the total number that the country reported since the beginning of the pandemic.

Some recent patients in Vietnam were infected with a hybrid of the virus variants first found in India and the U.K., the health minister said Saturday. Nguyen Thanh Long said the hybrid might spread more easily and could be responsible for Vietnam's recent surge.

Viruses often develop small genetic changes as they reproduce, and new variants of the coronavirus have been seen almost since it was first detected in China in late 2019. The World Health Organization categorized the U.K. and the Indian variants, along with two others first found in South Africa and Brazil, as “variants of concern” because they appear to be more contagious.

Vietnam has vaccinated 1 million people with AstraZeneca shots. It has a deal with Pfizer for 30 million doses to be delivered later this year. It is also in talks with Moderna that would give it enough shots to fully vaccinate 80% of its 96 million people.

Elsewhere in Asia and the Pacific:

— Thailand is redoubling efforts to stop the spread of the coronavirus in labor camps, factories and markets as the number of new reported cases surged Monday to the highest level so far. A government spokesman said public health authorities met with labor and industry officials to discuss better ways to curb infections that are concentrated in crowded, high-risk places. The government reported a record 5,485 new cases on Monday, with nearly 2,000 in prisons. Confirmed deaths increased by 19, bringing the total to 1,031 since the pandemic began. Concern over the rising numbers prompted the government to overrule a plan by Bangkok’s governor to ease some pandemic restrictions in the capital, including the reopening of parks. The plan, which was to take effect on Tuesday, will be postponed 14 days. Thailand had managed to keep outbreaks largely under control, at great economic cost especially for tourism, because foreign visitors were largely banned from entering the country. That changed in early April, when a cluster of cases centered on Bangkok bars and clubs spread as many people traveled during the weeklong Thai New Year holiday. The total number of confirmed cases has now risen to 159,792, of which 82% occurred during the latest surge.

— Singapore’s Prime Minister Lee Hsien Loong said Monday that controls to lower coronavirus infections were working, while announcing a move to vaccinate students after a spate of transmissions in schools and learning centers. Lee said controls banning dining out and severely limiting social gatherings were “on track” to be relaxed after June 13. He urged the public to remain vigilant and only leave home if they must. The government imposed the tighter controls this month after a number of local coronavirus cases were linked to malls, hospitals and the airport, up from virtually none earlier in the year. Nearly three quarters of the city-state’s 760,000 seniors have received at least one dose of the vaccine or booked their appointments. Now the jabs – which have been offered to those aged 40 and older – will be extended to students 12 and older from Tuesday.

— Malaysia opened its first mega vaccination center on Monday as the government sought to accelerate inoculations amid a worsening outbreak. Located in an exhibition center in the biggest city Kuala Lumpur, the center can vaccinate up to 8,000 people a day. Officials say more such mega centers will be opened nationwide but some critics urged the government to instead set up smaller centers at district levels to improve its outreach. Malaysia begins a near total lockdown starting Tuesday, the second time in over a year. Most social and economic activities, except for 17 essential sectors, will be shut down for at least two weeks as the government struggles to contain a worsening pandemic. Daily virus cases hit a record high of 9,020 on Saturday before easing to 6,824 Monday. Malaysia’s total infections have surged to 572,357 while deaths are more than 2,600, both rising five-fold compared to the whole of last year. Science Minister Khairy Jamaluddin said Monday the government is assessing the suitability of the Johnson and Johnson vaccine. So far Malaysia has only approved the use of Pfizer, AstraZeneca and Sinovac vaccines. More than 12 million people have registered but less than 10% of the country’s 33 million population have been vaccinated so far.

— Hong Kong authorities on Monday appealed to the private sector to offer incentives to help ease COVID-19 vaccine hesitancy, and warned that those who do not get vaccinated may face more stringent restrictions should the city face a new outbreak. Hong Kong leader Carrie Lam said at a news conference that she has written letters to over a hundred real estate developers and retail outlets, urging them to offer incentives that could boost the city’s vaccination campaign. The move comes as Hong Kong faces vaccine hesitancy, with just 20% of its population vaccinated since the end of February despite widespread access to inoculations. Vaccine registrations surged over the weekend after a real estate developer put a $1.4 million apartment up as a grand prize in a lucky draw, together with other prizes, open to all Hong Kong permanent residents who have been vaccinated. “Although it’s been a very short period of a couple of days, but we have seen some positive results,” Lam said. On Sunday, about 26,900 people made online bookings to receive the vaccinations, more than double the 12,600 on Friday, the day that the lucky draw was announced.

This story has been updated to correct that testing is planned for high-risk groups in Ho Chi Minh City, not the full population.