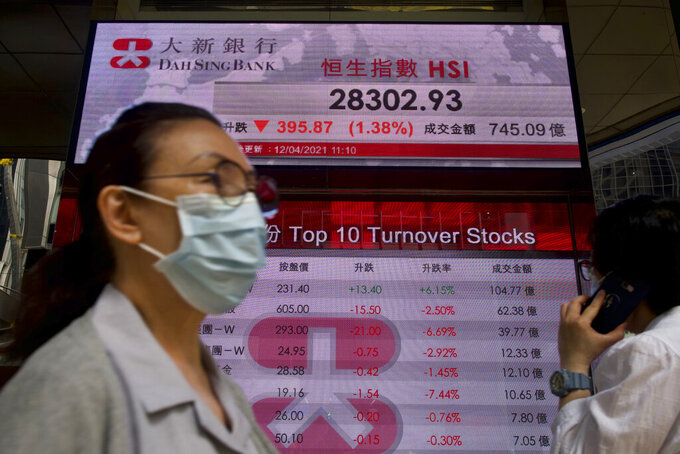 People walk past a bank's electronic board showing the Hong Kong share index at Hong Kong Stock Exchange in Hong Kong Monday, April 12, 2021. Asian shares were lower on Monday, as investors grew wary over the recent surge in coronavirus cases in many places while vaccinations are making scant headway. (AP Photo/Vincent Yu)

BANGKOK (AP) — Asian shares were lower on Monday, as investors grew wary over the recent surge in coronavirus cases in many places while vaccination efforts are making scant headway.

A moderation in bond yields has helped restore confidence that the Federal Reserve will move soon to raise interest rates to keep inflation in check as the economy recovers from the shocks of the pandemic.

But in Asia a resurgence of infections is undermining confidence in that trajectory.

China's top disease control official said during the weekend that the effectiveness of Chinese coronavirus vaccines was low and the government is considering mixing them to get a boost. It was a rare admission and comes as the country continues to battle outbreaks of the virus that first was reported in the central Chinese city of Wuhan.

Japan is struggling to get infections under control as it prepares to host the 2020 Tokyo Olympics. Thai health officials are warning the daily rate of new infections could top 28,000 if urgent measures are not taken to counter the country's worst outbreak so far.

“The vaccine rollout remains slow in Asia, but what is more concerning is a renewed divergence in virus caseloads, with second waves taking hold in India, the Philippines and now Thailand," Stephen Innes of Axi said in a report. That “continues to sully the global travel outlook," he said.

Shares in South Korea's SK Innovation Co. jumped 14% after it reached a settlement in a trade dispute with rival LG Energy Solution. The companies pledged to work together to strengthen the EV battery supply chain in the U.S., moving ahead with plans to manufacture batteries in Georgia in what President Joe Biden called “a win for American workers and the American auto industry.”

Chinese e-commerce giant Alibaba's shares were 6% higher after the company said it was fined $2.8 billion for anti-competitive behavior. The penalty was lower than feared, coming as the ruling Communist Party tightens control over fast-growing technology industries.

Small company stocks, which have outgained the broader market this year, lagged behind on Friday. The Russell 2000 index of smaller companies inched up less than 0.1%, to 2,243.47.

The yield on the 10-year U.S. Treasury note, which influences interest rates on mortgages and other loans, was steady at 1.65%. It ended Friday at 1.66% and had been as high as 1.75% last Monday.

Investors are showing cautious optimism about the economic recovery, especially in the U.S., where vaccine distribution as been ramping up and President Joe Biden has advanced the deadline for states to make doses available to all adults to April 19.

Investors are turning their attention to quarterly results as earnings season gets underway. The major banks are among the first to report their results, including JPMorgan, Wells Fargo and Bank of America. Analysts polled by FactSet have hiked their profit forecasts during the quarter. They expect growth of just over 24%, compared with the view back in September that companies in the S&P 500 would see 13% growth.