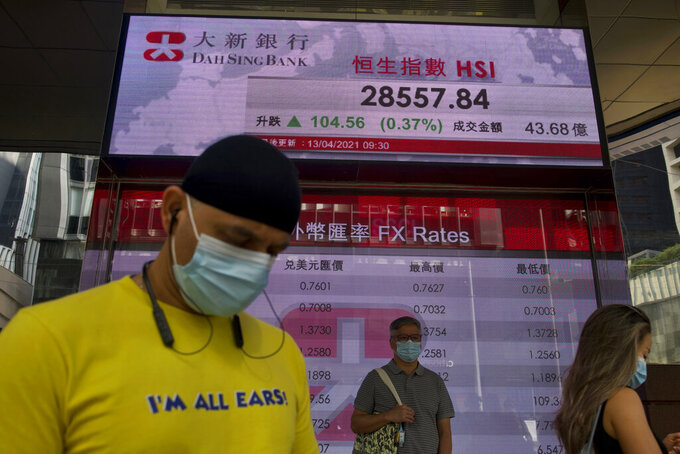 TOKYO (AP) — Asian shares were mostly higher on Tuesday with hopes growing for a global economic rebound despite surging coronavirus cases in many places.

China reported its exports rose nearly 31% in March, in line with expectations but weaker than the 60% growth seen in the first two months of the year.

The rising trade activity reflects higher demand in overseas markets even as some countries reimpose precautions to counter rising numbers of new infections.

Robert Carnell, Regional Head of Research Asia-Pacific at ING, expects trading in the region to be tentative as investors await data that will help assess the recovery from pandemic damage.

Apart from the Chinese trade data, “Asian markets, like others, will be on tenterhooks pending the release of important March U.S. inflation figures later today," he said in a report.

Earnings season is approaching and corporate results may indicate the direction of future growth as nations gradually emerge from the damage set off by the pandemic.

JPMorgan Chase and Wells Fargo report on Wednesday, while Bank of America and Citigroup report on Thursday.

Worries remain about recent surges in COVID-19 cases, including Brazil and Michigan state in the U.S. Earlier this week, Japan, which trails the world in the vaccine rollout, called for government-backed measures to curb the recent surge in the sickness in some areas.

In Thailand, authorities are warning of a potential explosion in cases after many new infections were found among people who frequent clubs and other entertainment venues.

On Wall Street, indexes gave up some of their recent gains as technology, communication and energy stocks weighed on the market.

Bond yields inched higher after easing most of last week. Investors have been focusing on the economic recovery as well as the risks higher inflation poses to consumers and companies.

Monday's pullback snapped a three-day winning streak for the benchmark S&P 500, which closed out last week with its third straight weekly gain.

“It’s this back and forth as the market tries to figure out how strong the economy is going to be and how long its going to last,” said Tom Martin, senior portfolio manager with Globalt Investments.

Technology stocks were the biggest drag on the market. Apple fell 1.3% and Google's parent company slid 1.1%.

The sector has been choppy as investors shift money to other industries that could see solid gains as the economy recovers. Rising bond yields have also made technology stock values look pricey after months of big gains. The yield on the 10-year U.S. Treasury note, which influences interest rates on mortgages and other loans, inched up to 1.69% on Tuesday.

While many economists are projecting a strong economic rebound this year, some companies that stand to benefit from the reopening of the economy were among the decliners Monday. Cruise operators Carnival and Royal Caribbean fell 5.3% and 3.1%, respectively.

Nuance Communications soared 15.9% after Microsoft said it would buy the speech technology company for about $16 billion.

In energy trading, benchmark U.S. crude added 32 cents to $60.02 a barrel in electronic trading on the New York Mercantile Exchange. It gained 38 cents on Monday to $50.70 per barrel. Brent crude, the international standard, gained 37 cents to $63.65 a barrel.