Asian shares mixed after US inflation jumps 5% in May 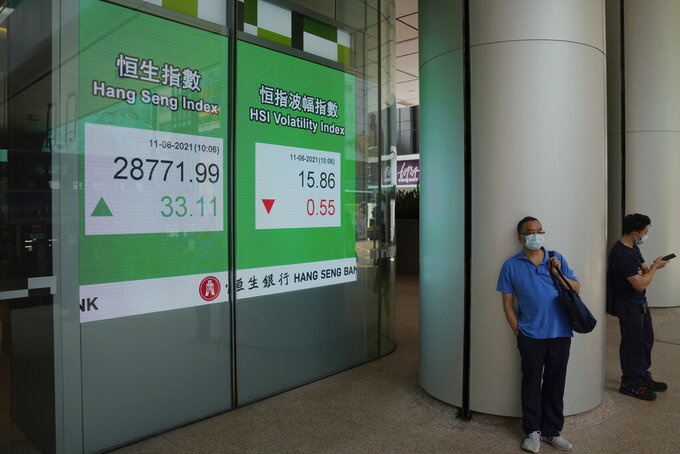 People wearing face masks stand next to a bank's electronic board showing the Hong Kong share index in Hong Kong, Friday, June 11, 2021. Shares were mostly higher in Asia on Friday after the S&P 500 index notched another record high despite a 5% surge in U.S. consumer prices in May. (AP Photo/Kin Cheung)

BANGKOK (AP) — Shares were mostly higher in Asia on Friday after the S&P 500 index notched another record high despite a surge in U.S. consumer prices in May.

On Thursday, Wall Street logged gains while bond yields mostly fell despite the much-anticipated report showing consumer prices rose 5% in May, the biggest year-over-year increase since 2008 and more than economists had expected.

The worry is that if signs of inflation persist, central banks may move to withdraw stimulus from the economy to ease price pressures.

But investors are still buying into the Federal Reserve's stance that the current bout of inflation is transitory, said Jeffrey Halley of OANDA.

“Financial markets have long raised a selective use of facts to an art form," Halley said in a report. “Although the US inflation measures rose once again and slightly above forecast, the actual increases were less than those recorded in April."

Taking all factors into consideration, “that was all the street needed to return to its buy-everything happy place."

In Asia, where China-U.S. tensions are among many factors weighing on sentiment, the mood was less ebullient.

A significant share of May's rise in consumer prices was tied to the sale of used cars, which is largely attributed to purchases by rental car companies beefing up their fleets as people return to traveling.

“Keep in mind that as we start to make our way back to a full economic recovery, there is pent up demand and supply constraints from raw material and labor shortages,” said Mike Loewengart, a managing director at E-Trade Financial. “This creates the type of inflation that the Fed believes is transitory, meaning it too shall pass. Whether or not they are correct remains to be seen.”

Bond yields initially rose after the inflation data, then fell broadly by late afternoon. The yield on the 10-year Treasury note slipped to 1.43% from 1.45% late Thursday.

Stocks have been meandering all week as investors waited for the update on inflation.

Investors will get to see next week how the Fed is reading the latest inflation barometer and what monetary policy changes, if any, the central bank may consider. The Fed's policymaking committee is due to deliver its latest economic and interest rate policy update next Wednesday.

Markets will also be tuning in this weekend for any developments at the summit of the Group of Seven in Britain. At the top of the leaders’ agenda is helping countries recover from the coronavirus pandemic, which has killed more than 3.7 million people and wrecked economies.

The G-7 leaders are meeting for three days at a British seaside resort. It's the first such gathering since before the pandemic.

In other trading, benchmark U.S. crude oil shed 25 cents to $70.04 per barrel in electronic trading on the New York Mercantile Exchange. It gained 33 cents to $70.29 per barrel on Thursday.

Brent crude, the international standard, lost 26 cents to $72.26 per barrel.